iPhone maker Apple has been awarded $539 million in its near seven-year patent battle with rival Samsung.

The unanimous verdict — which the jury came to after almost five days — will be closely watched by other targets of Apple litigation, such as chip-maker Qualcomm.

Steven Mollenkopf, Qualcomm’s chief executive, has said he hoped the two companies would settle out of court.

In 2011 Apple claimed that some Samsung smartphones infringed on patents and trademarks it had used in its iPhone and then in 2012 Apple was awarded a little over $1 billion in damages but the pair have been fighting over the final amount ever since, including a visit to the United States Supreme Court in December 2016.

Apple’s Steve Jobs once referred to its legal battle with Android as “thermonuclear war” — and it appears to be one Apple’s winning, though not by a lot.

Apple and Samsung were in 2011 and are still the world’s two biggest smartphone makers by the number of phones shipped, according to market research firm IDC.

We’re grateful to the jury for their service and pleased they agree that Samsung should pay for copying our products.

We believe deeply in the value of design, and our teams work tirelessly to create innovative products that delight our customers. This case has always been about more than money. Apple ignited the smartphone revolution with iPhone and it is a fact that Samsung blatantly copied our design. It is important that we continue to protect the hard work and innovation of so many people at Apple.

However, Samsung said the decision “flies in the face” of the unanimous Supreme Court ruling over the way design patent damages are calculated.

A spokesperson for Samsung said:

We will continue all options to obtain an outcome that does not hinder creativity and fair competition for all companies and consumers.

Apple shares are currently at an all time high, giving the company a market capitalisation of $931.5 billion. 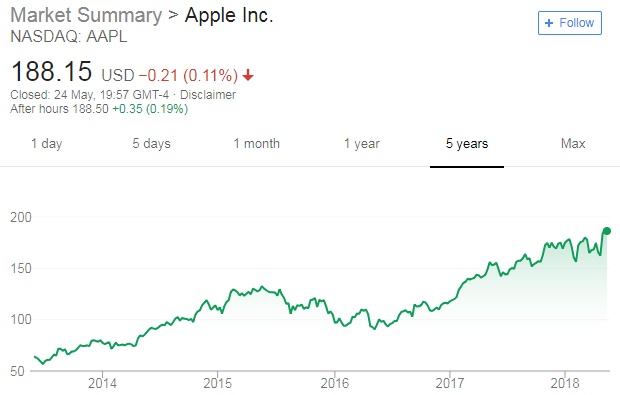