Cryptocurrency prices plunged throughout Wednesday, wiping more than $20bn in value from the crypto market.

Ethereum was among the worst hit cryptocurrencies. The Ether price fell by almost 21% between 10am on Wednesday morning and 2am on Thursday London time, and has shown little recovery in the hours since. 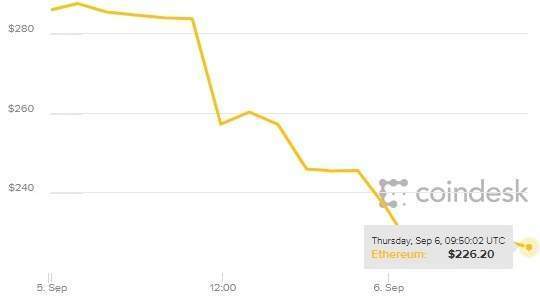 The Bitcoin price started and ended the day with big drops. The popular cryptocurrency began Wednesday at a price of around $7,400, falling by around 14% over 24 hours. The price fell 8% in the early hours of Thursday morning. That equated to a loss of around $570 per Bitcoin.

Why did it happen?

It’s not entirely clear. However, the cryptocurrency market seems to have responded, at least somewhat, to a report published by Business Insider suggesting that Goldman Sachs is ditching its plans to open a cryptocurrency trading desk.

According to sources close to the investment bank, the plans have been put on hold for the foreseeable future as a result of uncertainty over the regulation of the cryptocurrency market.

Goldman Sachs was expected to begin trading bitcoin in June, according to Bloomberg. However, it will now explore new ways to get in on the volatile market.

A company spokesperson has said:

“In response to client interest in various digital products, we are exploring how best to serve them in the space.

“At this point, we have not reached a conclusion on the scope of our digital asset offering.”

The price has shown little sign of returning to those highs, sitting somewhere between $6,000 and $9,000 for much of the year. In the grand scheme of things, yesterday’s fall isn’t all that much to be worried about. Cryptocurrency crashes are not uncommon and regular traders are no strangers to turbulence.

Yet, investors remain certain that Bitcoin is a bubble that will eventually burst. Although, most believe that there is still a future for the underlying blockchain technology and future cryptocurrencies after Bitcoin.

Alibaba founder Jack Ma recently said that the “technology itself isn’t the bubble, but Bitcoin likely is”.

Read more: The ten most influential crypto influencers of 2018