Tyrrell Hatton’s successful defence at the Alfred Dunhill Links Championship may have ended Rory McIlroy’s hopes of winning a title in 2017. However, the PGA European Tour goes on, starting with the Italian Open this week.

The Italian Open became part of the Rolex Series this year. As a result, the prize money up for grabs rises from €3m to €7m, as the competition continues to grow in stature.

This increase makes the Italian Open one of the biggest prize pots that the European Tour offers.

A number of less successful golfers will be hopeful of winning the prize money, buoyed on by Hatton’s victory last time out.

The winner’s path to victory has been made somewhat easier by the exit of McIlroy. The star golfer has announced that he will be putting down his club for the time being. He hopes to recover over the next few months before coming back stronger in 2018.

Ahead of the European Tour’s next stop, here’s everything you need to know about the Italian Open:

Where is the Italian Open 2017 being played?

The Italian Open will be held at the Golf Club Milano in Monza for the third year running.

Housed within 1,700 acres of green, Golf Club Milano offers a short 27-hole course that requires a steady aim to come out on top.

With warm weather and clear skies forecast, the beautiful course should offer good viewing to those attending.

The Italian Open will begin on Thursday, 12 October and run until Sunday, 15 October.

The tournament will get underway at 6:50am London time, as the first lot of golfers take to the course.

The first round will begin at 6:50am on Thursday.

Justin Walters, Lee Slattery and Paul Waring will kick the tournament off on hole one. Kiradech Aphibarnrat, David Drysdale and Mike Lorenzo-Vera will tee off first at hole ten.

Players will tee off at ten minute intervals throughout the first day.

Favourite Jon Rahm will be beginning his tournament at 12:15pm on Thursday, while Francesco Molinari will begin his defence at 7:50am at hole 10. 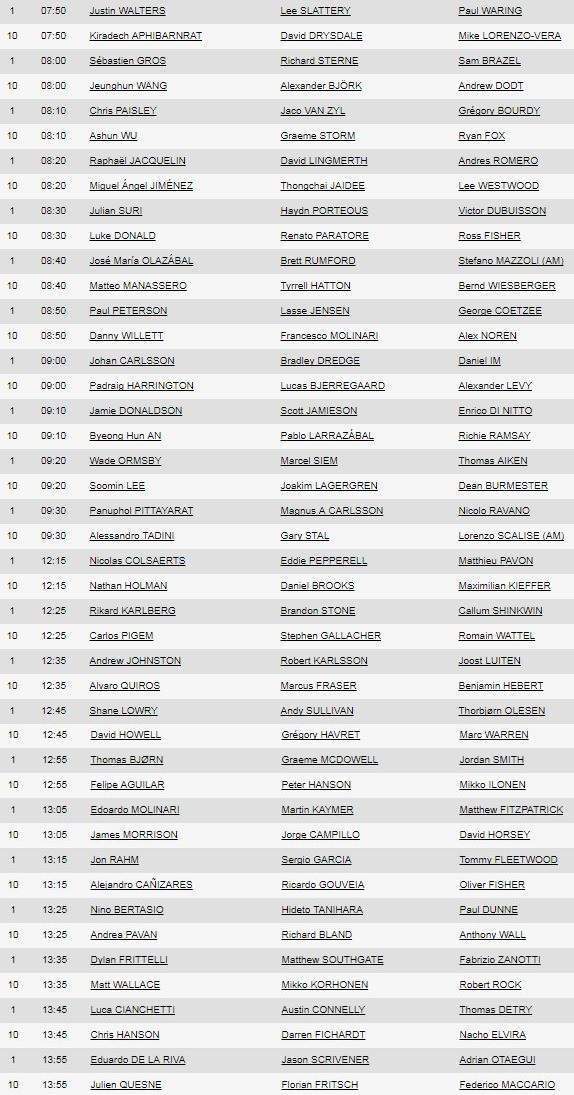 Round 2 will begin with Nathan Holman, Daniel Brooks, Maximilian Kieffer, Nicolas Colsaerts, Eddie Pepperell and Matthieu Pavon at 6:50am on Friday.

The Italian Open tee times for rounds 3 and 4 have yet to be announced, but these will be released within the next few days.

The full list of Italian Open tee times will go live on the European Tour Website as it draws closer.

Spanish world number 5 has Jon Rahm has been made the favourite to win this year.

You don’t need tickets to attend the Italian Open.

Both adults and children will be granted access to the venue free of charge during the event.

Is the Italian Open on TV?

With the CIMB Classic also taking place this week, coverage will be switching between the two events.

The Italian Open will be shown from 9am on Thursday and Friday. Coverage on Saturday and Sunday will begin at 11:30am.

Likewise, those in the United States can watch the golf via SuperSport channel 11.