Japanese technology investor SoftBank has posted a record annual profit as its bets on emerging tech firms around the world begin to pay off.

SoftBank — which owns businesses in sectors ranging from telecoms, to ecommerce, and robotics — posted a rise in profit for the year ending March of JPY1.3 trillion ($11.9 billion), up from JPY1 trillion last year.

Revenue was JPY2.35 trillion. However, SoftBank has not released a forecast for the current business year, saying there were too many uncertain factors.

Over the last year, SoftBank — founded by CEO Masayoshi Son in 1981 — has poured an eye-watering $30 billion in 25 tech firms around the world such as dog-walking app Wag and construction startup Katerra. The company has also ploughed a further $13 billion into ride-hailing firms Uber and Didi Chuxing.

The investments in Uber and Didi may eventually be offered to SoftBank’s Vision Fund.

The Vision Fund has received financing from sovereign wealth funds and tech firms, including Saudi Arabia and Apple. It has raised around $93 billion since it was founded last year, making it the world’s largest private equity fund.

Shares in SoftBank rose ahead of the market close in Tokyo this morning. However, the company’s shares are down some 4% so far this year — which has been blamed partly on the company’s dizzying array of investments creating what’s been called a “conglomerate discount”. 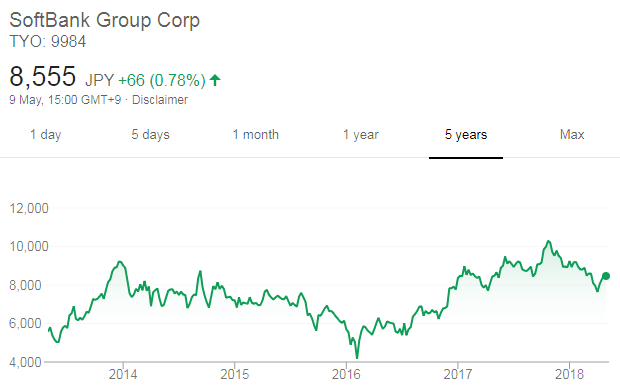 The company’s results have been somewhat overshadowed by the sale of its US mobile carrier Sprint to larger rival T-Mobile last month for $26.5 billion in stock — something CEO Son has long pursued.

This deal is likely to face heavy scrutiny from regulators, however, and would see the number of US mobile carriers shrink to just three.

SoftBank is also planning an initial public offering of its domestic telecom business.