When Just Eat — an online takeaway platform that owns no restaurants or stores — enters the FTSE 100 next month it will rank higher than Marks and Spencer and Sainsbury’s. Is this the start of a new world order and will upstart Deliveroo be hot on its heels?

Just Eat’s shares have soared 43 percent this year on the back of revenue growth and acquisitions. 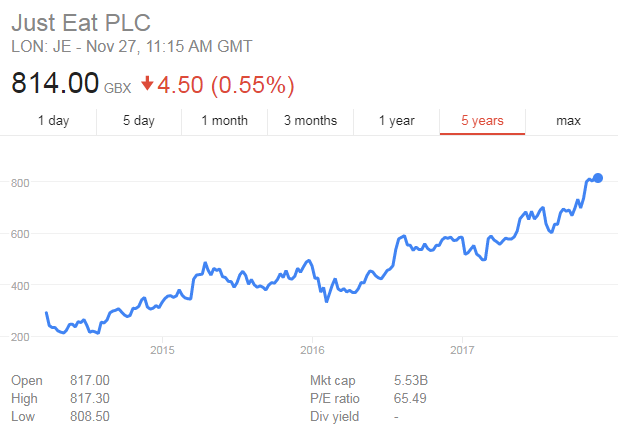 While it is not yet confirmed that Just Eat will be moving up into the blue-chip FTSE 100 index (the decision will be made tomorrow), it’s widely expected it will be.

The company will then formally take its place in mid-December, with the likes of Babcock, one of Britain’s oldest engineering groups, and theme park owner Merlin Entertainment falling from grace.

Just Eat’s market value has more than tripled since it floated in April 2014 as online food ordering has surged across the UK and now attention is turning to Deliveroo, fresh from a near $400m funding round and eyeing an IPO of its own.

The latest funding for Deliveroo values the company at more than $2bn and was led by US investors Fidelity and T Rowe Price — both of which put money into US tech giants Facebook and Snapchat before they went public (with mixed results).

Meanwhile, Uber’s food delivery arm UberEats is also trying to muscle in on the market.

The big difference between the firms is that Just Eat does not provide delivery drivers, removing it from much of the gig economy legal trouble that has dogged Deliveroo and UberEats.

The latest funding for Deliveroo values the company at more than $2bn and was led by US investors Fidelity and T Rowe Price — both of which put money into US tech giants Facebook and Snapchat before they went public (with mixed results).

Deliveroo now has 1,000 employees in 12 countries, covering more than 150 cities and while Just Eat did it first, Deliveroo wants to do it better.

It’s growth certainly suggest it’s fast on the way to eclipsing Just Eat — which operates in just 13 countries around the world despite a 12 year head start on Deliveroo.

Deliveroo chief executive Will Shu, in a recent interview with Business Insider, said an IPO would be the next logical step for the company and now has the US in his sights.

We’re thinking about all kinds of possibilities. I think an IPO is somewhat logical given the lead investors in this last round. Those are public market investors, T Rowe Price and Fidelity. The US is a market that, I think, if we want to go in we have to go into a lot of cities simultaneously, it’s such a big market. We’re focused on what we’re doing right now.

While Deliveroo”s expansion plans appear to leave Just Eat in the dust it’s not going to forgo the market without a fight.

Just Eat announced earlier this year it planned to move upmarket and take on Deliveroo and UberEats by working with branded restaurant chains in the UK.