Scientists have brought the goal of commercially available lab-grown meat a step closer by successfully growing cow and rabbit muscles on edible scaffolds in order to mimic the texture and consistency of real meat.

The research, which is published today in the journal Nature Science of Food, is one of several projects underway focusing on the creation of lab-grown meat. While muscle tissues have been successfully grown by other researchers, recreating the complex texture and taste of real meat remains an unrealised goal.

This research, which has been undertaken by scientists at the Harvard John A Paulson School of Engineering and Applied Sciences (SEAS), brings the ultimate target a step closer by growing muscle tissue on edible gelatin scaffolds.

“Muscle cells are adherent cell types, meaning they need something to hold onto as they grow,” said Luke Macqueen, first author of the study and postdoctoral fellow at SEAS and the Wyss Institute for Bioinspired Engineering.

“To grow muscle tissues that resembled meat, we needed to find a ‘scaffold’ material that was edible and allowed muscle cells to attach and grow in 3D.”

The research came about after study first author Kit Parker, The Tarr Family Professor of Bioeningeering and Applied Physics at SEAS who has previously worked on regenerative medicine, judged a television competition on the Food Network.

“The materials science expertise of the chefs was impressive,” said Parker.

“This is our first effort to bring hardcore engineering design and scalable manufacturing to the creation of food.”

However, growing muscle tissue on such scaffolds at any form of scale is not easy.

“It was important to find an efficient way to produce large amounts of these scaffolds to justify their potential use in food production,” said Macqueen.

This issue was solved using a technique known as Immersion Rotary Jet-Spinning already developed by Parker and the Disease Biophysics Group, which spins nanofibers of specific shapes and lengths using centrifugal force.

This method was used to spin gelatin fibres that are safe to eat, and which can be used to form the structure around which cells can grow. 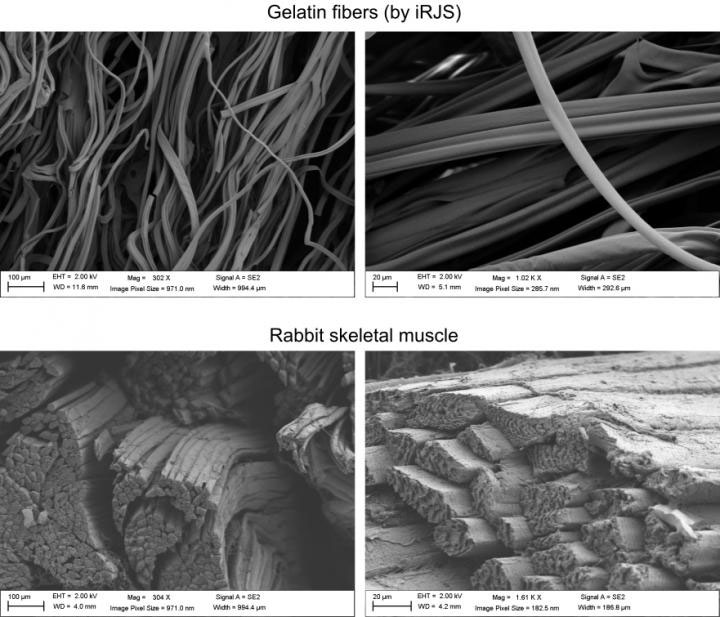 The gelatin fibres used to form the scafford, above, and the lab-grown rabbit muscle produced.

While the results are not yet at the stage where this meat can be commercialised, the muscle tissue grown does create a texture resembling real meat.

“When we analysed the microstructure and texture, we found that, although the cultured and natural products had comparable texture, natural meat contained more muscle fibres, meaning they were more mature,” said Macqueen.

“Muscle and fat cell maturation in vitro are still a really big challenge that will take a combination of advanced stem cell sources, serum-free culture media formulations, edible scaffolds such as ours, as well as advances in bioreactor culture methods to overcome.”

Looking forward, while there are plans to commercialise the project, there will be goals to overcome before we see lab-grown meat on supermarket shelves.

“Our methods are always improving and we have clear objectives because our design rules are informed by natural meats,” added Macqueen.

“Eventually, we think it may be possible to design meats with defined textures, tastes and nutritional profiles – a bit like brewing.”