It’s universally recognised that our hunger for meat has a direct environmental effect.

Livestock farming contributes to roughly 18% of all greenhouse gas emissions on the planet and a 2018 Oxford University study found that the most effective way to reduce the environmental impact is to avoid meat and dairy.

Although the idea of the whole population moving to a plant-based diet (we’ll leave the dairy topic for another time) seems a little extreme, we are seeing a rapid transformation in what we eat and how we eat it as technology and sustainability collide.

So what’s happening and where could it lead us?

Plant-based food is growing on us

Plant-based meat alternatives are nothing new, but the sector is now growing more rapidly than many anticipated. KFC is working on a vegan chicken burger, while IKEA is planning to launch a new plant-based meatball. Just this week McDonalds launched a vegan burger in its German locations. And let’s not forget the Greggs vegan sausage roll.

The launch of The Impossible Burger by Impossible Foods caused a huge stir back in 2016 with its genius method of creating Heme, which makes up part of the haemoglobin molecule found in blood, from the roots of soy plants.

Since then the company has gone from strength to strength, recently launching its revised recipe for The Impossible Burger 2.0 (an apt name for such a tech-focused food company based in Silicon Valley), while fast food giant Burger King confirmed it’ll be rolling out The Impossible Whopper across all its locations in the US by the end of 2019.

Last month, Impossible Foods’ main rival Beyond Meat saw its stock value soar an impressive 163% on its Wall Street debut in the best IPO of 2019 so far – valuing the company at $3.77bn.

How could a plant-based food company grow so successfully? Arguably one of the key reasons here is Beyond’s clever marketing and retail strategy, as it insists that its products be placed alongside meat in supermarkets as opposed to in the meat-free sections. By clearly targeting meat eaters and not vegetarian or vegan customers the company has positioned its products as a real meat alternative. 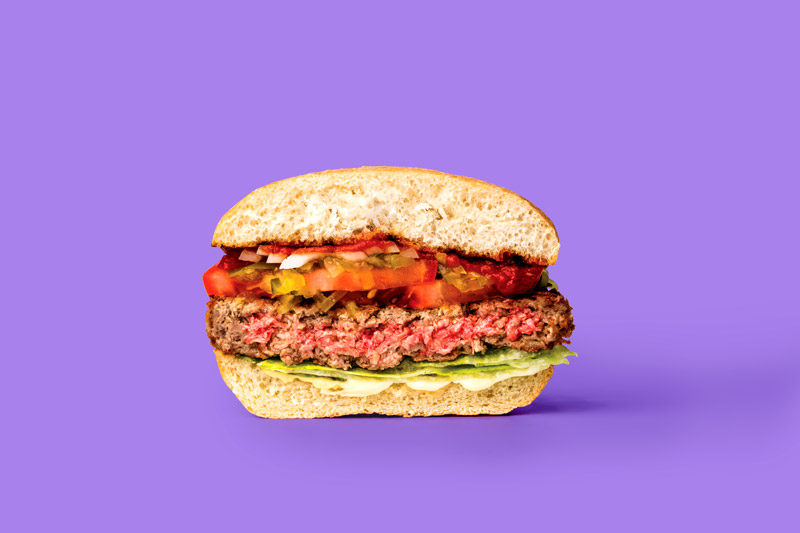 The Impossible Burger, also pictured above, is a leader in plant-based meat alternatives.

It’s unlikely any of this is going to slow down. In fact, the global meat substitute market is expected to grow to $7.5bn by 2025.

So with a noticeable shift in the number of people choosing to forego meat on a regular basis and opt for plant-based alternatives, you can naturally assume that we’ll be seeing more companies emerging with new offerings, and further breakthroughs being made in food science in order to make the products more appetizing.

Although realistically the majority of people will still prefer a burger of the carnivorous persuasion, this increase is more sustainable and would help to offset the environmental impact of a growing livestock industry. Impossible Foods says that its new burger has an 89% smaller carbon footprint than a traditional beef burger, while Beyond Meat’s burger produces 90% fewer greenhouse gas emissions.

A cultured shock: The rise of clean meat

The next major breakthrough is almost definitely going to come in the form of ‘clean meat’ or ‘cultured meat’; animal meat grown in laboratory conditions.

Since Professor Mark Post created the first cultivated burger in 2013, the cost per burger has dropped from £215,000 to just £8. Post and his company, Netherlands-based Mosa Meat, predict commercialisation by 2020, and across the pond there are others trying to keep pace with this timeline.

After launching egg-free mayonnaise, cookie dough and scrambled egg, JUST, Inc is aiming to launch its first cultured meat product by the end of 2019. If these estimates stay on track then a viable alternative to traditional livestock farming is close on the horizon. But is this realistically going to happen? 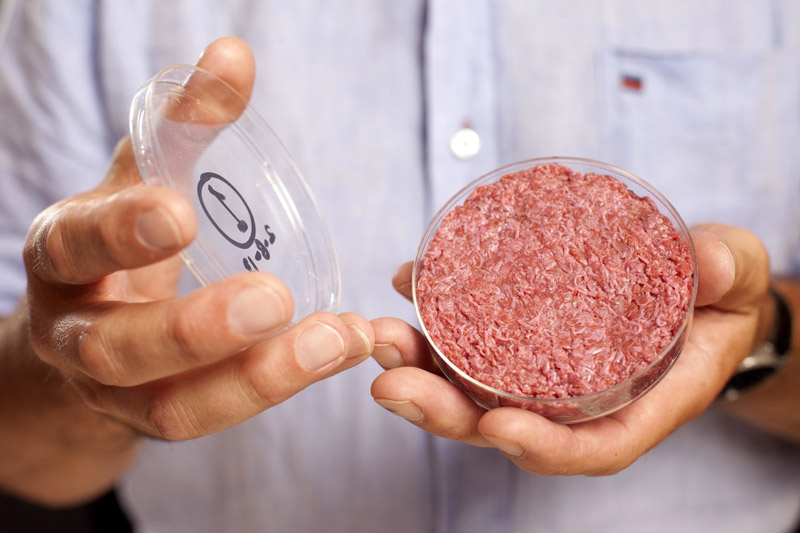 Mosa Meat produced the first cultured meat in 2013, and is planning to commercialise next year.

Challenges to the meat revolution ahead

There are some obstacles. Growing the meat to a form and structure similar to real meat is very difficult, with most batches we’ve seen so far resembling something similar to ground beef due to the simpler structure. But it does look possible: Israel-based Aleph Farms recently succeeded in growing steak (albeit in small quantities).

There are also questions on the sustainability and environmental impact of cultured meat, as the reduced methane output produced by traditional cattle farming is countered by an increase in CO2 emissions. This is a key area which will need to be addressed in order to make the whole process more sustainable.

If the technological and economic issues are overcome then the final and largest obstacle will be convincing consumers that it’s okay to eat meat grown in a lab. There’s no denying that the ‘ew’ factor comes into play here, but who knows – some clever marketing might just do the trick.

If it doesn’t stick as an independent product, lab-grown meat could instead be a viable replacement to farmed meat for mass-produced foods such as ready meals, enabling the cost of production to be lowered.

Both Forbes and The Economist declared that 2019 is the year of the vegan, and it seems that they weren’t wrong, as Big Food is certainly diving into the area in order to meet demand. After investing in Beyond Food, Tyson Farms announced plans to launch a new vegan protein product this year, and the patty used in McDonald’s new burger is made by Nestlé.

But whether it’s big players or new innovators driving the charge, as the spectre of climate change looms over our collective consciousness, moving to more sustainable food production is one of the most important steps to take if we want to feed our growing population.