Just in time for London Fashion Week, the UK’s capital city has reinforced its reputation as the world’s top destination for luxury retail.

According to Savills’ recent Global Luxury Retail report, more luxury retailers opened stores in London than any other city in 2016. Out of the 41 new stores opened, 15 were the respective brand’s first ever store in the UK.

London’s West End retail district, which is composed around Bond Street, Oxford Street and Regent Street is one of the most successful in the world, with an annual turnover of over £8.8bn. This is expected to grow by about 27 percent to around £11.3bn by 2020.

According to Savills’, London is considered a useful stepping stone for European brands before expanding into the US, while also providing a European base for US brands.

“The role of a specific destination in brand building and enhancing the customer experience remains key, and the heritage of London and Paris saw these cities rank first and second for new luxury openings last year. With international travel expected to double by 2030, appetite among luxury retailers to expand in key markets will remain strong, though we expect to see several of the emerging luxury markets gain more market share.”

Brexit is one factor which caused the growth in London’s appeal, as the city welcomed a high tourist footfall thanks to the slump in sterling.

In addition, Chinese tourists helped boost the city’s reputation too; the country’s nationals are the biggest spenders on luxury goods globally and buy around 40 percent of luxury items abroad.

“A significant proportion of luxury goods are now purchased outside a shopper’s home market, particularly those of Chinese consumers, reinforcing the importance of destination cities. This was apparent in 2016, when all of the key established global retail destinations saw more than 20 luxury brand store openings.”

Luxury goods is a market that is only set to grow for the UK. In 2014, the UK held 5.8 percent of the market share in the luxury goods retail market.

However, according to a recent report by GlobalData, the UK will become the fourth largest market in 2019, overtaking France and Italy. This is down to economic recovery and a rise in tourist spending in mature markets.

This is slightly lower than previous predicted, due to economic turmoil in countries such as China and Russia which will slow the growth of luxury goods nationally and globally. 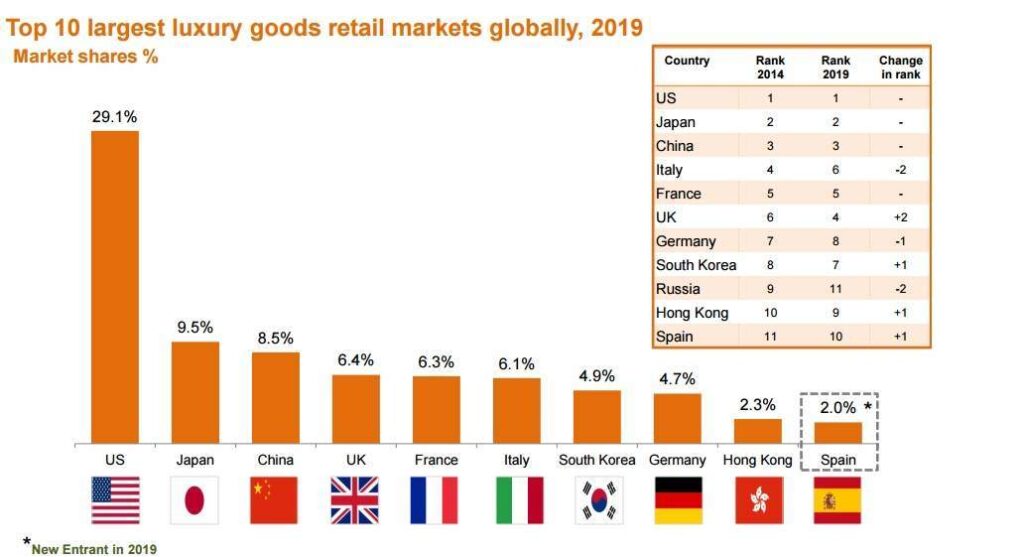