Tesla is a strange company, with a stranger man and the helm. That hasn’t stopped investors from throwing money at the company, but are they investing in where Tesla is now or where it will be in the future?

When Elon Musk founded Tesla, what’s now known as the Model 3 was already built into the business plan.

Musk, who had previously made his money in online money moving company PayPal, bet that the world would soon be ready for a mass-market electric car.

It didn’t happen quite as quickly as he thought it would but now it’s here.

Musk wrote about what he ironically called his “secret master plan” here. This is an excerpt (emphasis ours).

Almost any new technology initially has high unit cost before it can be optimized and this is no less true for electric cars. The strategy of Tesla is to enter at the high end of the market, where customers are prepared to pay a premium, and then drive down market as fast as possible to higher unit volume and lower prices with each successive model. Without giving away too much, I can say that the second model will be a sporty four door family car at roughly half the $89k price point of the Tesla Roadster and the third model will be even more affordable. In keeping with a fast growing technology company, all free cash flow is plowed back into R&D to drive down the costs and bring the follow on products to market as fast as possible. When someone buys the Tesla Roadster sports car, they are actually helping pay for development of the low cost family car.

Judging by the demand we’ve seen so far for the Model 3, the world is ready. And now all Musk has to do is keep them rolling off the production line.

Musk had previously said he thought the demand for the new vehicle would reach roughly 500,000 vehicles per year.

However, this was revised upwards following the launch of the new electric car last month. Musk now thinks demand will hit an annual rate of “more than 700,000 units“.

Investors believe him. They are so confident of Tesla’s ultimate success, the market now values it higher than many of its established rivals. 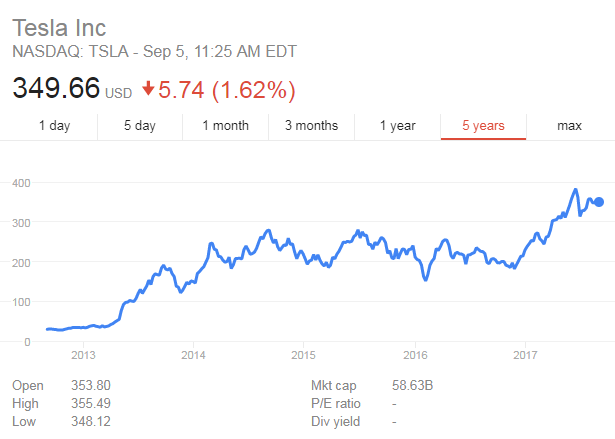 Tesla seems to be two things at once. On the one hand, it’s a car company that wants to sell as many cars as possible and make a lot of money for its investors and shareholders.

This chart certainly seems to support that idea.

Tesla’s Western Europe director Georg Ell certainly seems focused on the task at hand: Selling as many of the Model S and Model X as possible.

The attitude of Tesla — at least in Europe — is that it is a car company, selling cars. And yet, there is a persistent feeling that the company sees itself as so much more.

The absent mind of Musk

We’re now nearing the completion of that business plan that Musk laid out all those years ago — to build an electric car company that can bring affordable, emission free driving to the mass market.

But then what? What happens to Tesla once it’s achieved this (impressive) goal?

Does it stop looking forward and remain fixed on churning out mass market electric cars? Or do the affordable electric cars become a driver to some other goal?

Musk has been on the prowl for opportunities to apply the company’s battery research to other sectors.

This week Tesla joined hands with Vestas, a top wind turbine manufacturer, to create a storage system that would make power generated from wind useful during quiet days in the jetstreams.

Batteries would seem to be the next stepping stone, but it appears unlikely they’re where the company will come to a stop.

Musk’s tie up between Tesla and SolarCity would also support this idea.

Last year — much to ire of some investors — Tesla Motors officially moved beyond cars and became a clean-energy company in November, integrating the all-electric car maker and batteries with the installer of rooftop solar panels.

While some weren’t happy more than 85 percent of Tesla shareholders voted in favour of the merger.

Musk is still able to dictate the direction of the company — running on a combination of press power and his almost cult-like status.

Where he turns to after clean energy though is far less certain. He has often spoken about his musings on artificial intelligence and the worrisome future of machine learning. Could the clean energy revolution be a stepping stone for Tesla to avert the robot apocalypse?

Judging by Musk’s twitter account — something that is surely a constant source of frustration to his public relations staff — Musk is often concerned by the direction of AI development.