You can now make your own frozen yogurt in the comfort of your own home in just 10 minutes.

Founded by two former Google employees Bart Stein and Anthony Cafaro, Wim is the company behind the $299 gadget on sale here.

What’s so appealing? The description of the appliance on the company’s website says its all about convenience.

Whether you’re making it or enjoying it, frozen yogurt should never be hard. That’s why Wim is literally one button — press it, and the machine gets really, really, cold. It’s quiet, compact, and clean-up free.

Stein got the idea for Wim while he was staying at an AirBnB on holiday in upstate New York during the winter of 2014.

They all believe that there is money to be made in the frozen dessert sector, which is worth an estimated $60bn globally.

Twenty pods cost $3. All you have to do is add the milk of your choice — full-fat cow’s milk, almond, coconut or soy milk. 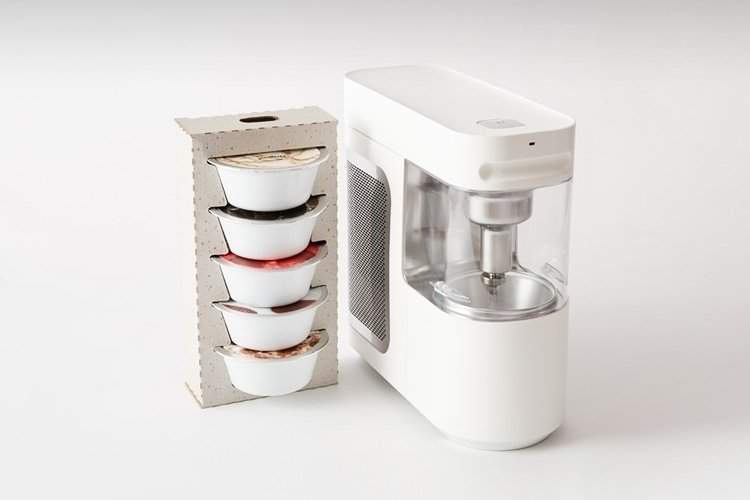 Wim-Bowls contain 8g less sugar than the frozen yogurt on offer at chains like Pinkberry.

“Our recipes are subtly sweetened with natural honey, so they contain less sugar than Pinkberry and Talenti,” the company’s website notes.

Stein and Cafaro’s team is made up of big names in the food industry including Jena Derman, an alumni of New York’s popular bakery Momofuku Milk Bar.

As Wim’s chief culinary officer, she is responsible for developing the yogurt mixes.

It took a team of 10 people almost two years to create the frozen yogurt maker.

We didn’t want this to be an appliance that’s smarter than you are, that requires Wi-Fi or Bluetooth. We wanted to make it simple. Just press one button when the yogurt is done, and the machine stops. I want people to have a fresh bowl of frozen yogurt to eat, not a crazy display of lights and buttons.

The appliance is not suitable for large groups, but Stein insists that the company has plans to create a machine which can produce larger quantities of frozen yogurt in the future.

The current focus is toward a single-serve machine. A lot of America is in smaller household: singles, couples, single-child households.

By the end of 2018, the company hopes its frozen yogurt maker will be in tens of thousands of homes.