A new Norwegian ship tunnel, described as the first of its kind and designed to bypass a highly dangerous area, has been included in the country’s latest national transport plan.

The so-called Stad Ship Tunnel — a plan many years in the making — is going to push the limits of engineering possibilities.

“The idea is more than a hundred years old – although they were not [all] serious plans. Even the Vikings [talked about it],” says Terje Andreassen, project manager for the Stad Ship Tunnel at the Norwegian Coastal Administration (NCA).

Andreassen’s work focuses on a 1,700km-long, 37m-high and 26.5m-wide tunnel, through the narrowest point of the Stad peninsula in Norway.

The tunnel has been designed to allow ships to safely navigate through the Stadhavet Sea, which has long been associated with treacherous conditions.

Indeed, many consider it to be Norway’s most hazardous shipping route.

“The sea outside the Stad peninsula is very dangerous,” says Andreassen, adding that “it has a very rare underwater topography.”

As Andreassen explains, the idea is nothing new, but this latest iteration has been given a serious shot in the arm: political support.

Norway has included it in the country’s most recent national transport plan, with a recommendation to fund at least a portion of the NOK2.7bn ($311m) cost.

We are pleased that the ship tunnel now becomes reality. [It] is an important project on the western coast of Norway, which will provide greater predictability and safety for transport by sea. It will create opportunities for establishing new ferry and shipping routes, and transfer of freight from land to sea transport.

In truth, the “reality” is still many years off, but Andreassen and his colleagues at the NCA are not short on confidence.

Andreassen, of course, welcomes this new political will to get the gears moving.

Nonetheless, this newfound enthusiasm for the Stad tunnel does come with a pinch of realism.

The NCA is effectively starting from a blank piece of paper.

Andreassen has been able to study previous plans that never took off, but as a world-first, they are the trailblazers.

The challenge is vast. Approximately 3m cubic metres of rock will be removed. 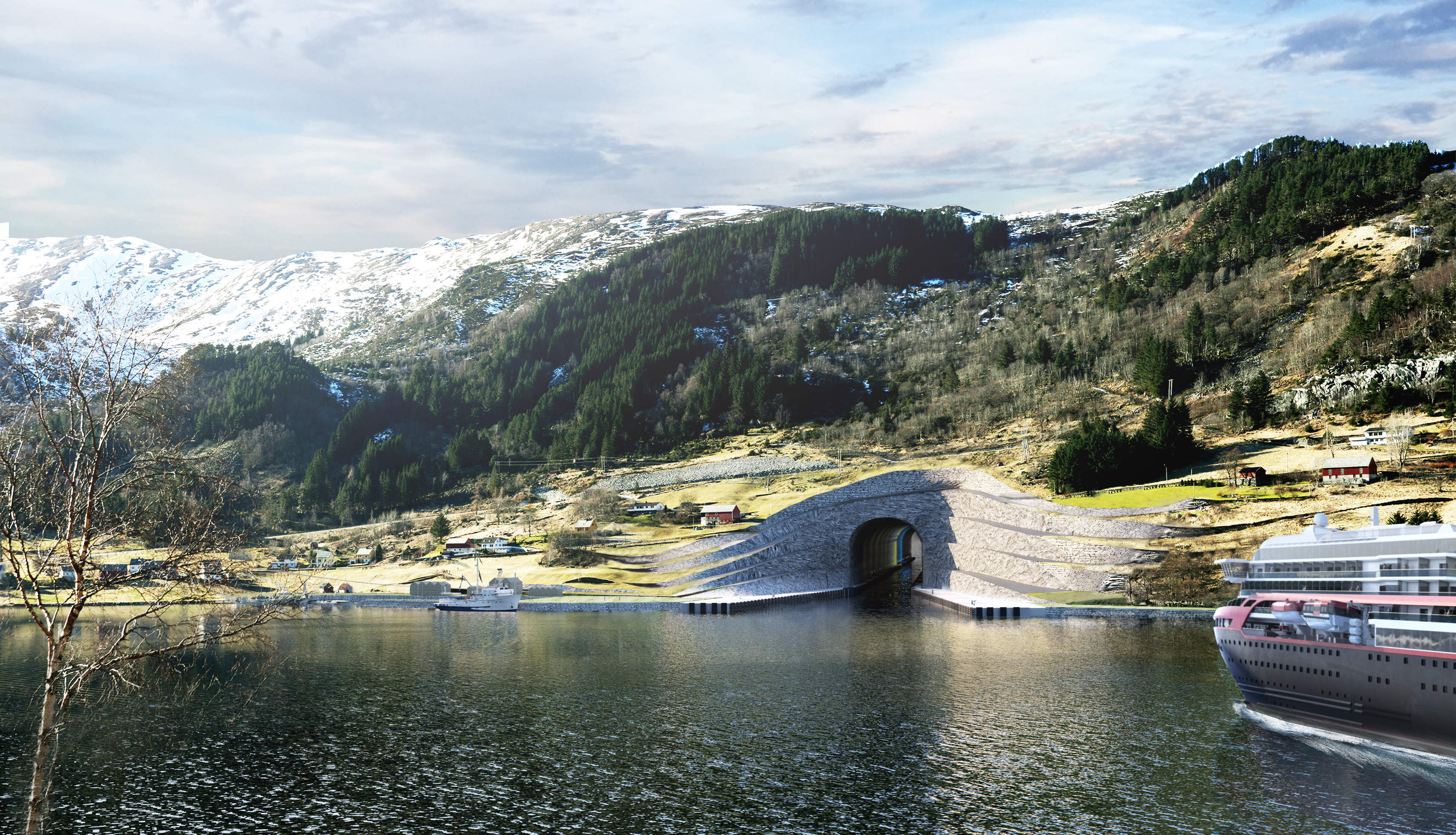 First, the team will drill horizontally from either end, before using explosives to clear the roof section of the tunnel.

This will then be secured before shotcrete (a type of concrete) is inserted.

The NCA intends to complete the tunnel using techniques similar to open mining, and stone thresholds will be constructed to prevent water from entering the tunnel during construction.

“Yes, it will be a challenge,” admits Andreassen, “but we have a lot of experience of tunnel construction in Norway. The cross section of this tunnel is huge, and the landscape is quite steep. There’s almost no flat land connected to the tunnel, so you have to do a lot of rigging work before you start tunnel work.”

The official NCA website states the tunnel could be open by 2023, with construction potentially starting in 2019 or 2020.

When it’s put to Andreassen that this timescale could be too ambitious, he references the large amount of work that has gone into feasibility studies and preparation.

“We have looked at what has been done before,” he says.

There have been many plans for this. We have used computer simulations. We have a lot of experience of tunnel construction in Norway.

The Stad project also has to complete a process of quality assurance and cost estimates, known as KS2, before any construction work can begin.

An external check of the NCA’s feasibility study could be complete by the end of the year.

The logistics of the tunnel

From a vessel perspective, commercial traffic will get priority, and expectations are that the tunnel will have a capacity of 100 ships per day – all one-way traffic that is alternated every hour.

“If you want divided [two-way] traffic, you should build two tunnels,” says Andreassen.

The tunnel should be able to accommodate cruise and freight ships weighing up to 16,000 tonnes.

The NCA states that ships are likely to get time slots from a vessel traffic centre, which is similar to how aircraft have slots at an airport.

There will be no financial charge for vessels measuring less than 70 metres. As for speed, the official NCA website states:

A decision on final speed limitation for both fjords and in the tunnel will be made at a later date. Through the tunnel, it will likely be eight knots for speed boats, which equals a ten-minute voyage. Other boats would most likely have to hold five knots.

Aside from the safety element, hopes are strong that freight transport and tourism in the region will receive a boost.

“It will help the transportation of freight become more predictable,” explains Andreassen. “If there is bad weather, [at the moment] vessels have to wait for one day or more, because of safety.

“Already we have people who want to come to see the building of the tunnel and want to sail through it when it is finished.”

Note, though, that the public will not be able to walk through the tunnel.

The first of many?

The Stad vision is not without criticism, however.

Knut Samset, a professor of project management at the Norwegian University of Science and Technology, has claimed the “cost-benefit analysis is negative”, and argued that modern-day ships are able to handle the rough sea conditions.

Such a view is rejected by Andreassen, who said earlier this year:

The advantage is in bad weather conditions, during which you will save a lot of time and fuel.

So, could the Stad signify the beginning of more ship tunnels?

“For other places in the world? I don’t know, really,” says Andreassen. “In Norway, we have high mountains and so on. In other places, where the landscape is quite flat, you can build a canal, which is of course easier.”

For now, Andreassen is focused on finishing more preparatory work, as he waits for the political process to take its course and parliament to make a final decision.

Hopes are high that this plan will buck the trend and do what its predecessors couldn’t – give the world its first ship tunnel.

This article first appeared on ship-technology.com. You can read the original here