PayPal has bought mobile payment company iZettle for a whopping $2.2 billion — taking the company a step closer to becoming a fully fledged bank.

PayPal — which boasts some 200 million active customer accounts — will have an in-store presence in 11 markets in Europe and Latin America as a result of the iZettle acquisition.

The move also scuppers iZettle’s plans for an initial public offering later this month that it had hoped would give it a valuation of $1.1 billion.

While PayPal in 2008 was granted a banking licence in Luxembourg, it has shunned traditional banking in favour of payments.

One of PayPal’s founders Peter Thiel has previously said PayPal is not a bank because it does no fractional-reserve banking and keeps its funds (deposits) in commercial interest-bearing checking accounts.

However, PayPal is increasingly competing with a number of startup banks such as Monzo in the UK.

Monzo launched three years ago and began offering current accounts last April. It revealed last night that its users can now use their Monzo debit cards with Apple Pay — a feature many have been calling for and something that PayPal will also be able to offer in stores around the world with iZettle.

The iZettle deal is PayPal’s third sizeable acquisition in five years after it bought Braintree owner Venmo for $800 million in 2013 and Xoom, the international money transfer service, for $890 million in 2015.

In April last year PayPal began offering insurance on account balances in the US, a debit card that can be used to withdraw cash at ATMs, and the ability to direct-deposit paychecks, the Wall Street Journal revealed.

PayPal launched a prepaid card that offered some banking features in 2012 but charged users fees when they opened an account and when they loaded funds into it.

Meanwhile, Paypal rival Square is issuing bank cards to users of its Cash App and online retailer Amazon is thought to be investigating building a current account-like product for its customers.

PayPal and many other tech companies are not regulated as banks in the US, however.

If you don’t have a bank account, you can’t take an Uber ride, can’t stay in a room on Airbnb.

Focusing on payments — up until now online — has proved lucrative for PayPal. Since its spin-off from eBay in 2015 its share price has doubled. 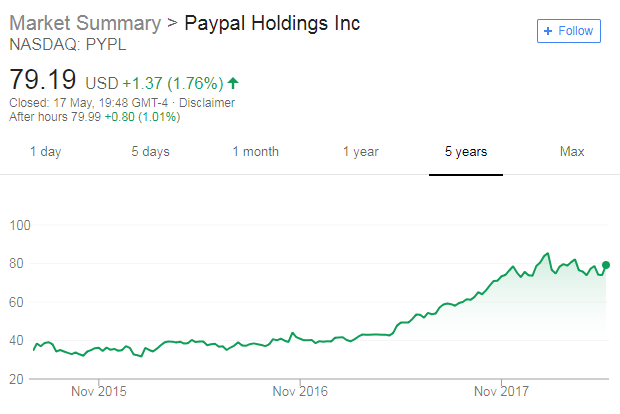