Despite markets cheering Emmanuel Macron’s victory in the French election on Sunday, Europe’s rich are far from feeling the quickly shifting political landscape makes for a good place to keep their cash.

The research shows the importance of political instability as a driver for offshore investments has risen dramatically over the past year.

In June of last year the UK voted to leave the European Union, surprising many after polls showed the country was likely to vote to remain. This, along with Donald Trump’s election as president of the US in November, has caused concern other European countries could vote for protectionist or isolationist leaders.

While markets and investors had broadly hoped for a Macron victory in the French elections, he still represents a political upset for the establishment and all the uncertainty that comes with it.

The French election was the first time in the history of the Fifth Republic that neither of the traditional parties — the French Socialist Party nor the Republicans — had candidates in the runoff.

The events of the last 12 months has led to a jump in the importance of political instability when investors think about where to keep their assets.

The proportion of European high net worth (HNW) wealth invested offshore to escape political instability rose by eight percentage points within 12 months, to 11 percent in 2016.

Traditionally, HNW investors in the developing world would invest offshore to protect their assets from political instability, while those in Western Europe would invest offshore to reduce home market bias or to minimise tax liabilities. The European political landscape is becoming increasingly fragmented and polarised. Recent political uncertainties surrounding Brexit negotiations, the refugee crisis, and upcoming elections have left investors worried.

The research found those investing offshore to protect their wealth from political instability tend to allocate an above-average proportion of offshore wealth to bonds.

Where are people most concerned about political instability?

Investors in Indonesia are by far and away the most concerned about political instability, with South Africa almost 10 percentage points behind it.

With European heavyweights France and Germany in the top ten, and above Russia, investors have clearly been spooked by recent events.

Investors in Hong Kong and the US, despite their particular political challenges, both remain relatively confident their in country assets will remain safe. 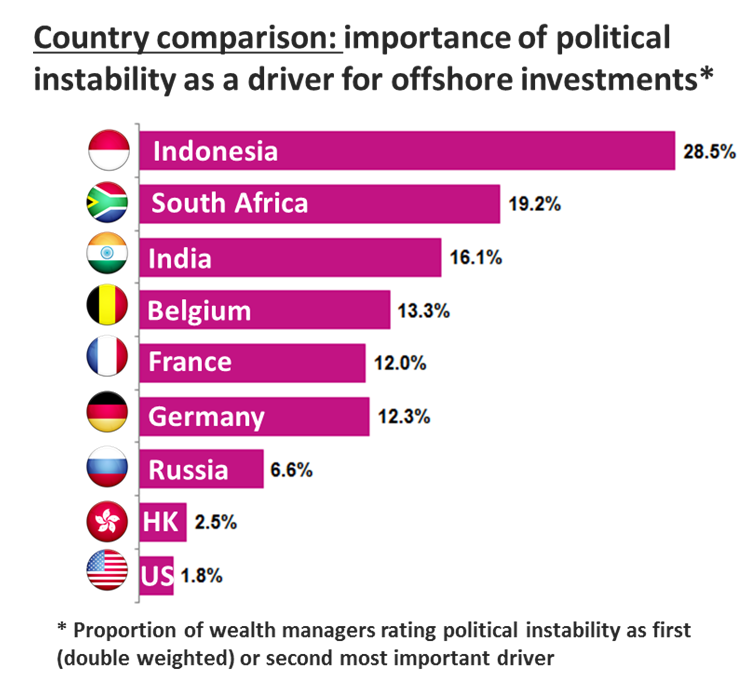 Providers should also focus on the safe haven aspects that many of the top offshore destinations, such as the US and Switzerland, offer to drive more wealth offshore. As the economic and political landscape is changing, so are the reasons for offshore investment. Clearly, wealth managers have to take this into account when designing and marketing their offshore propositions for European investors.