It takes a special degree of confidence to suggest to world wide web inventor Sir Tim Berners-Lee that he switch his computer off and back on again. Once the technical glitches were sorted, the Open Data Institute (ODI) – of which Sir Tim is president and co-founder – launched its 2020 summit, themed ‘Data | Futures’, focusing on how current events have brought forward already-simmering discussions on how we use and share data.

Regular UK Government briefings have created thousands of armchair epidemiologists, scrutinising data and charts that under normal circumstances would never have fallen under the public gaze. This exposure is symptomatic of the Covid-19 coronavirus pandemic and its blurring of the lines between public and private data. The Open Data Institute, a UK non-profit dedicated to enabling people to safely innovate with data, chose to dedicate its summit to exploring key themes about the future of data, and how 2020 has accelerated many applications.

Childhood wellbeing and the digital divide

On 10 November, the day of the summit, Ofsted published its second report on the effects of the Covid-19 pandemic on children, finding that children who were hardest hit by school closures and restrictions have regressed in some basic skills and learning. The ODI released research on a similar theme in its Data about children’s lives during the pandemic, but covering many more datasets to provide a rich insight into the impact of the pandemic, not only on education but the wellbeing of children, parents and teachers.

ODI managing director Louise Burke said: “This report has been commissioned by the ODI because, as we’ve seen, the current education sector has faced many major challenges as a result of the sudden and extended lockdown, and the impact that it’s had on our schools and our young people.

“We need to try and understand the true impact of the pandemic and the lockdown on educational provision, and the attainment for our students in the UK, but also there in the long-term implications on the wellbeing of those involved. This is invaluable to all of us, and it is a story that touches all of our hearts across the UK and worldwide, and we wanted to try and focus in on and using our reports to highlight some of the issues that have surfaced.”

The researchers used datasets from the Department of Education, analysis of parents’ forum Mumsnet and data from children’s charity Barnardo’s to highlight the current state of play and identify what’s missing. This will help the ODI determine what it needs to do and invest in to create a strong data infrastructure, which will in turn to allow it to make the right decisions to support young people and help steer the UK out of the pandemic.

“We would ask the government to work with social media companies, charities and other organisations that have access to data that can provide insights about issues of public concern, and to make that data more accessible for research and public good practices,” said Burke.

ODI Programme Manager Dr Mahler (Milly) Zimeta went on to explain: “The Ofsted report focuses on the impact on children and their skills development of that emergency homeschooling. Our work also looks at the wellbeing of children in these circumstances, the impact on adults, including both parents and teachers. It’s really important we think about the consequences of these kind of unpredictable lockdowns.”

To do this, it took into account both qualitative and quantitative data, combining hard statistics with personal insight and experience to make the data picture richer and complete. The ODI also considered the ‘digital divide’ – differences in access to digital technology that was used for homeschooling – and the different experiences between public and private schools, which is important for policymakers.

“Our report is very much a rapid response piece of work,” said Burke. “We considered the ethical consequences of not doing this research and that’s going to be really important for government in the future; how to respond quickly to situations that arise from the pandemic. We also demonstrate that with new sources of data, such as combining social media data and data from apps, you can do real-time analysis, which is critical for the granularity and the speed of response.

“We call on more data share between organisations to allow that kind of thing to happen. It’s also really important to support civil society in their responses to providing support, not just the government response to the pandemic.” 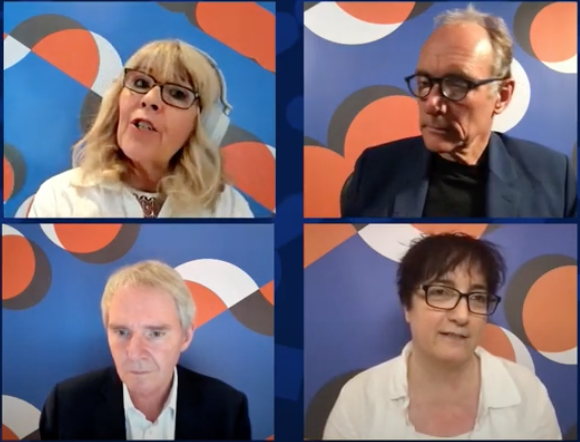 “We’re in a world when people everywhere are constantly having to make decisions based on data,” said Berners-Lee, and that data is public, private and points in-between.

“The data spectrum has always been a valuable tool for looking at data,” he said. “The Open Data Institute is concentrating on public data, which is really important, but also you’ll hear about data institutions, which is data which may be shared with a lot of people so they can collaborate, but it may not be absolutely private.

“Some of it lies across its spectrum. Of course, private data has become really important and there is a massive focus on the use of private data. My current passion is this Solid Project.”

Solid – or social linked data – is a proposed set of conventions and tools for building decentralised social applications based on Linked Data principles. It is modular and extensible and it relies as much as possible on existing W3C standards and protocols. It is a technology for organising data, applications, and identities on the web, and enables richer choices for people, organisations, and app developers by building on existing web standards. Berners-Lee recently set up a new company, Inrupt to support the introduction of Solid.

“Solid gives power to people to share or not to share,” he said. “It fills in the data spectrum and, in fact, when you look at your life a lot of your life is actually in that gap. If you only look at the very public data in the very private data, you miss out most of your life.”

Elaborating on the data spectrum, ODI executive chairman and co-founder Sir Nigel Shadbolt reflected on what we have learned about data access from the pandemic.

“We’ve seen extraordinary achievements through the open data initiatives that are around; everything from the data that gets published on a weekly basis by the ONS, the large-scale infection survey, for example, which gives us an idea of where the virus is across the country within different age groups, and all that stuff that scientists are sharing about the molecular makeup of the virus through to the research that’s being undertaken right now being openly shared,” he said.

“We’ve seen something that very dramatic happen when normally commercially-paid-for data has been made available for the duration of the pandemic. There’s an extraordinary list of resources, everything from scientific publications that you’d normally need to be a subscription to, to commercial companies offering their insights around footfall and retail transactions to companies to governments. Now this is all on a timely basis in the face of the epidemic.”

He called for a new kind of settlement, to share public and private data, citing the example of how European Telcos made their anonymised data about mobile traffic available insights into where population flows have occurred and where the restrictions have worked. In other cases, personal electronic health records have been analysed to give insights around comorbidities and what therapies could work. This all takes place behind secure firewalls, allowing medical researchers to get results without the data leaving the service.

“So my real message from today is, let’s try and imagine an innovation and agile space across the whole data spectrum where we try and get as much data released, shared and used for the common good as we can,” he concluded.

What should the government do now?

ODI Vice President and Chief Strategy Officer Jeni Tennison focussed on what the government should do, with the Department for Digital Culture, Media and Sport (DCMS) currently leading a consultation around UK national data strategy.

“We need to have government being a proactive part of our data ecosystem, and also shaping what our data infrastructure and data landscape really looks like,” she said.

Tennison added that we must be aware that the public sector has a huge role and influence over our lives. Data stories that broke over the summer – for example Ofqual changing the way exam results were assessed due to the pandemic – raised questions about when data should be used for making decisions about people’s lives, particularly by the public sector.

“Government also has this big role in giving us the environment that we need in order for data to flow to the places where, where it’s needed,” Tennison added. “Whether that’s through stimulating innovation through challenges and prizes, whether it’s through activities to create the standards for open banking, for example, or whether it’s setting up data institutions like UK Biobank, government has a big role in shaping what that data ecosystem looks like. The national data strategy and the implementation of that strategy should support the wider economy as well as use of data within government.”

Read more:  What Brexit and the end of Privacy Shield mean for data sovereignty in the cloud