Always on the front line of the latest technological innovations, South Korea has used the 2018 Winter Olympics in PyeongChang, to showcase its latest creations.

A total of 85 robots have been enlisted at the Games this year, deployed in roles from serving drinks, to sweeping floors and painting giant murals, according to the International Olympic Committee.

A walking humanoid robot kicked-off the games in December, carrying the Olympic torch through Daejeon and passing it to another manned robot, to mark the opening of the Games.

Here are five of the coolest robots and unmanned drones spotted in the Olympic Village over the last few weeks.

Schools of colourful robotic fish, complete with flashing lights and transparent casing that exposed their inner workings could be seen swimming around glass tanks in the Main Press Room and the Super Store, according to local newspaper, the Korea Herald.

The fish, modelled on Koi and sea bream, can dodge obstacles and swim in water up to five meters deep for up to 30 hours when fully charged.

According to one observer, Owen Sweeney, a journalist present at the Games, the bots are equipped with sensors that help them detect when people or walls are nearby so they can correct their course.

They are like a mixture between the depressed robot in the Hitchhiker’s Guide to the Galaxy movie and Hal from 2001: A Space Odyssey.

In an interesting showdown I saw a cleaning woman running to get out of its way while a man who always walks closely behind it tried to tell her he always has the power to switch it off. 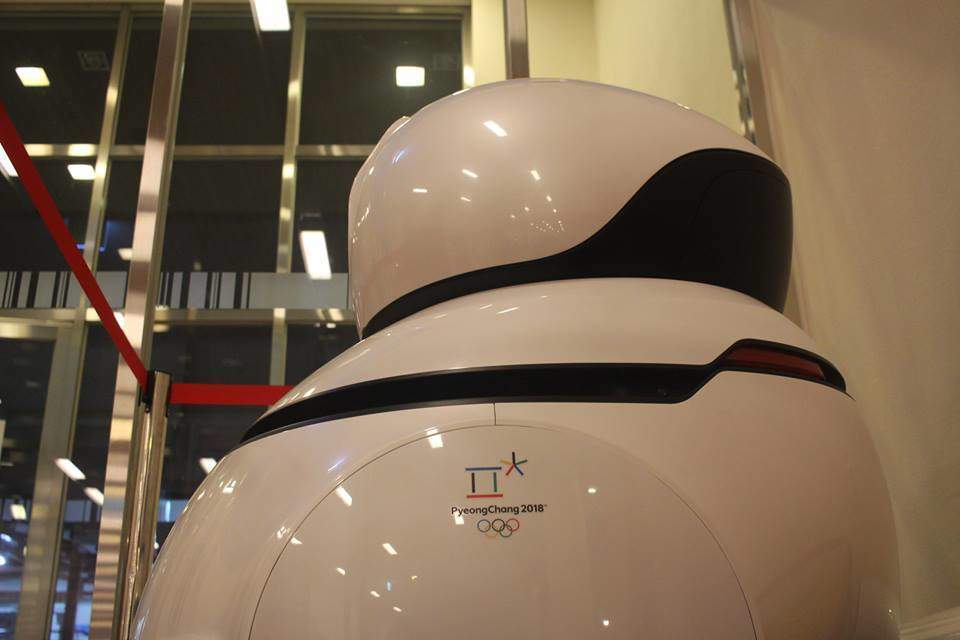 Two robot drinks-servers, shaped like mini-bar were also on duty, rolling around the main press centre plying guests with drinks.

According to NPR’s Bill Chappell, the robots appear every hour and self-navigate to guests, dispensing water bottles from a flap at their centre, before returning to a charging point in the corner.

This little robot comes by every hour to see if people want water at #PyeongchangOlympics2018 pic.twitter.com/g7HOQ6i4Av

Another NPR correspondent Melissa Block posted a video of a giant printer-like robot, painting a big mural of the Pyeongchang Winter Olympics cat mascot Soohorang on a wall.

Drone show lights up the sky with digital fireworks

Sweeney also said that 1,218 drones lit up the sky in a in a spectacular “digital fireworks” display during the opening ceremony of the Games.

The drone show that was used in the opening ceremony is on display every night here. It is incredible. Very soon it will be the future — digital fireworks.

As far as I know there’s an element of automation and sequencing that keeps them all in the right positions during transitions that’s very complicated (but very well managed) by Intel.

The fact that these drones are so light, yet are so reliable for what they are used for, is very impressive to me. The drone show starts at 9pm local time, but they are already in the air at 8:55pm. Then they light up and the rings appear and the crowd goes wild.

The performance was repeated every evening since, with the drones moving in sync into the shape of five interlaced rings – the symbol of the Olympic Games.

The technology designed by Intel’s Shooting Star platform, uses a fleet of foot-long, eight ounce quad-copters, weighing eight ounces, that fly in formation for up to 20 minutes, according to US tech magazine Wired.

If you haven't seen @Intel's world-record breaking drone show at the #OpeningCeremony yet, you haven't lived: https://t.co/JfOuldJiF6 pic.twitter.com/RlCe6SPZEU