Lee was convicted of a range of offences including bribery and embezzlement and was detained for 353 days, according to South Korean news service Yonhap.

Lee’s five year jail term — in part for bribing the country’s former president Park Geun-hye — has been cut has been cut to 2.5 years with four years of probation.

Prosecutors had claimed that Lee bribed Park to win government backing for a contentious 2015 Samsung merger.

The unexpected decision has raised questions about the governments ability to rein in the power of the country’s biggest companies, known as chaebols.

Again, I feel sorry to everyone for not showing my best side. And it has been a really precious time for a year reflecting on myself.

The government has been dilly-dallying over chaebol reform. It will face more pressure to step up. This has become another typical chaebol case.

The ruling will allow Lee to return to management which he is expected to do immediately, with his ailing father, Samsung Electronics chairman Lee Kun-hee, incapacitated since a heart attack in 2014.

Meanwhile, it’s thought Lee will likely appeal his sentence again and it will take more than six months for the supreme court to make a final ruling.

The corruption trial of former president Park is still ongoing and she is currently being held in custody. Her trial began in May last year.

Prosecutors originally sought a 12 year sentence for Lee, with many hoping it could help establish the rule of law for a country re-examining ties between government and business.

While Lee was in detention, Samsung Electronics appointed new leaders in his absence and continued to perform well. Lee has been in detention since February as part of the bribery trial but since then, Samsung has managed to shake off the scandal.

The company reported record quarterly profits in July, thanks to a rise in global demand for its memory chips. Shares in the company climbed some 41 percent last year. 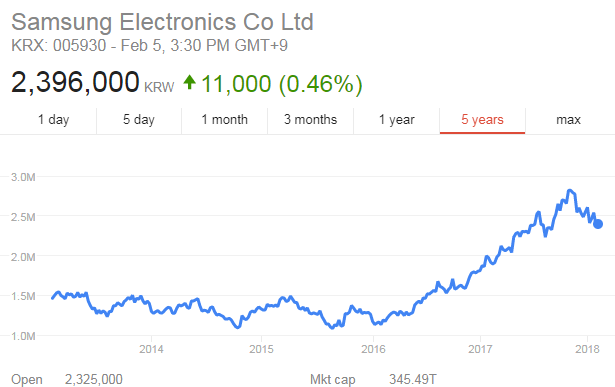 Samsung Electronics is regarded as the jewel in the crown of the Samsung Group conglomerate, which is made up of 60 interlinked companies.