Almost 60 percent of small businesses employing EU nationals are concerned about losing access to skilled workers post-Brexit, according to a report published by the Federation of Small Businesses (FSB) today.

The FSB surveyed 1,236 of its small business members.

Over half — 54 percent — said they would struggle to grow their business without EU workers.

Our report finds some #smallbiz will face a real challenge if there are sudden restrictions on EU workers #FSBbrexit https://t.co/HcmiZaaocX pic.twitter.com/oLVLBC5A2H

Just over 20 percent of small firms in the UK currently employ staff from an EU country. A significant number of companies therefore want to guarantee continued access to labour and skills from Europe. 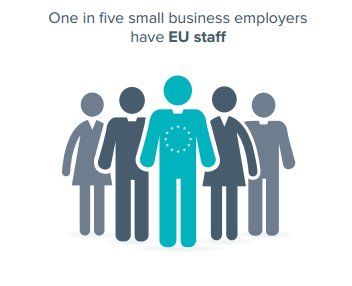 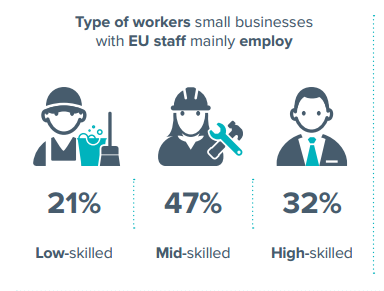 If Brexit creates additional barriers to recruiting EU citizens, 8 percent of small firms said they would shut down altogether and 13 percent said they would move their operations abroad.

“EU workers are a vital part of our economy, helping to plug chronic skills gaps across a wide range of sectors, and filling jobs in an already tight labour market. From packers, to mechanics, to graphic designers, small employers need to be able to hire the right person, for the right job at the right time,” said FSB’s chairman Mike Cherry in a statement.

Cherry added that a transition period after the UK leaves the EU is necessary to ensure that companies and workers can adjust to new immigration rules.

“Securing the right to remain for EU workers in the UK must be a priority. It’s also crucial small firms are given time after the UK leaves the EU to prepare for the new immigration arrangements. There can’t be a sudden cliff edge preventing small firms from accessing the workers they need. This means having sensible transitional arrangements first, followed by the phased implementation of a new immigration system,” he added.