Apple’s iPhone 12 series highlighted the focus on 5G smartphones in the second half of 2020. US carriers took advantage of the resultant interest and more than doubled 5G smartphone promotions compared with the first half of 2020. One out of every two smartphone offers in the last six months of 2020 was for a 5G phone. 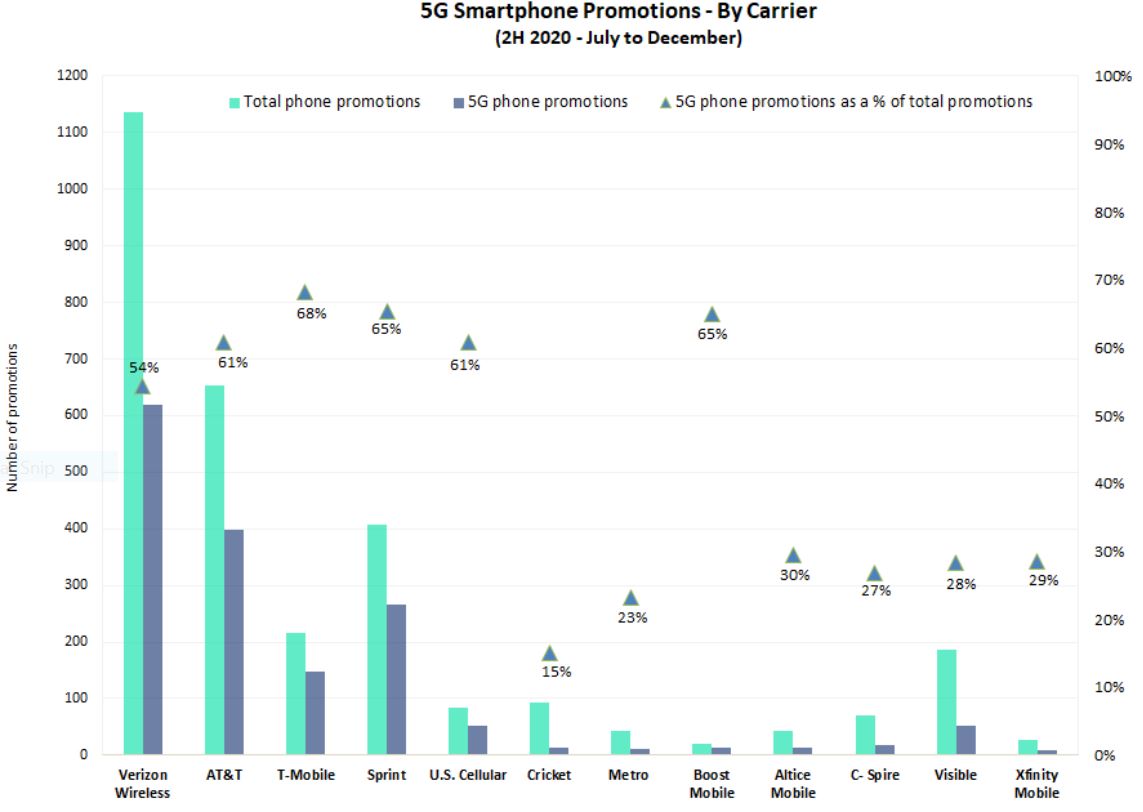 Apple’s phones are big consumer draws, especially around the holiday season and used for switcher and upgrade promotions at US carriers, but Samsung’s range of 5G phones was the most promoted in latter half of 2020. One out of three smartphone deals was for a Samsung 5G phone indicating that the OEM is putting all its resources to solidify its position as the foremost 5G phone vendor.

Verizon outnumbered all carriers in the total number of phone deals in the second half of 2020. Its flood of device discounts resulted in an addition of 163,000 postpaid phone net adds in Q4 2020 and the second lowest postpaid churn on record.

In the last six months of 2020, lockdowns drove entertainment numbers up, especially streaming subscriptions that tend to be sticky. Verizon’s 2019 exclusive partnership with Disney which allowed it to bundle the latter’s streaming service with its wireless plans, helped the carrier retain its prime subscriber base. Almost two-thirds of Verizon’s initial group of Disney+ customers have maintained their subscription either through direct billing or by opting for one of the carrier’s Mix & Match plans with the Disney bundle included.

During the latter part of 2020, AT&T maintained a steady pace of phone promotions, even during the holiday season, compared with the first half of 2020. More than 60% of AT&T’s smartphone deals were for 5G phones and its device promotions aided in the addition of 800,000 phone net adds.

AT&T’s postpaid phone churn was the second lowest quarter on record, coming in at 0.76% for Q4 2020. The holiday period promotions, which started in October helped AT&T reduce churn and retain customers.

T-Mobile offered over five times fewer promotions than Verizon but added five times the number of high-value subscribers, which highlights that the whole package of device choice, promotions, service plans, and customer service plays a part in retaining and acquiring subscribers. While 14% of T-Mobile’s promotions were targeted smartphone upgraders or users willing to trade in their phones, its offers do not seem to have helped retain high-value customers.  T-Mobile showed the highest postpaid phone churn in Q4 2020 at 1.03%. While the churn has been attributed to Sprint customers that T-Mobile inherited after its acquisition of the carrier, AT&T and Verizon kept their churn low YoY showing that T-Mobile is still vulnerable to switching.

Staying true to the trend, 65% of all of Sprint’s device promotions in 2H 2020 were for 5G phones, compared with only 32% at the start of 2020.One fourth of Sprint’s postpaid customer traffic has already been moved over to the T-Mobile network, and more than 4 million customer network migrations have been completed. In the meantime, devices are still being sold in retail as Sprint by T-Mobile.

While smartphone promotions may not be the sole indicator of growth in earnings, phone deals, when combined with competitive service pricing, quality of network and improved customer service, can drive an increase in essential metrics. As the wireless market teeters toward saturation, subscriber growth is getting tougher, and we can expect carriers to come up with aggressive and innovative promotion options in the near future to increase subscriber base and revenue.