Japanese conglomerate SoftBank Group has reported a record $12.7bn annual loss as bad investments in the likes of WeWork were compounded by the coronavirus pandemic’s economic destruction.

The group’s first annual loss in 15 years will put further pressure on SoftBank chief Masayoshi Son, who cast a downbeat tone in an earnings call on Monday.

The $100bn Vision Fund has reported losses in the previous two quarters.

WeWork, which rents out office spaces but marketed itself as a tech company, has been fighting to bring down costs after last year’s failed IPO and mismanagement by founder and former CEO Adam Neumann.

During an earnings call on Monday, Son said: “It was foolish of me to invest in WeWork. I was wrong.”

SoftBank has reportedly pumped at least $18.5bn into WeWork.

Both Uber and WeWork have been hard hit by the pandemic. WeWork’s office subscription model means it is paying rent to landlords but not collecting from workforces that are largely working remotely. And with travel limited in all of the countries where Uber operates, the US firm has seen a decline in ride volume.

OneWeb, a satellite internet startup backed by SoftBank, filed for bankruptcy in March after it failed to secure new funding.

“The investment we have made may lose some of its value,” said Son, speaking about the overall portfolio during the earnings call. “But from a cashflow perspective, in principle, we will not provide cash to those fragile companies for rescue.”

Meanwhile Indian hotel chain Oyo and automated pizza delivery company Zume – both backed by SoftBank – have laid off staff during the pandemic, in a sign that its portfolio faces further strain from the coronavirus outbreak.

In its earnings presentation, Son stood beside an image of a unicorn flying out of a “coronavirus valley” to illustrate the difficulty that its portfolio faces during the pandemic.

“I believe some of them will fly over the valley,” he said. 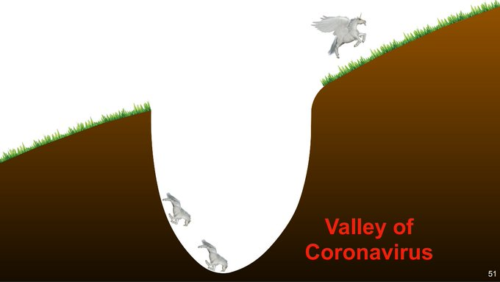 Son used the “valley of coronavirus” to demonstrate the challenges startups face.

Like many other companies, SoftBank declined to provide a financial forecast for the rest of the year due to coronavirus-related uncertainty.

Jack Ma, the co-founder of Chinese ecommerce giant Alibaba, resigned from the board of SoftBank Group hours before it announced its results. No reason was given for his departure after 13 years in the role.

SoftBank Group’s share price is up just over 1% year to date.