Asian markets have fallen sharply in the Tuesday session as US market contagion spreads around the world.

The falls follow the biggest sell off-of equity in a little over six years in the US. 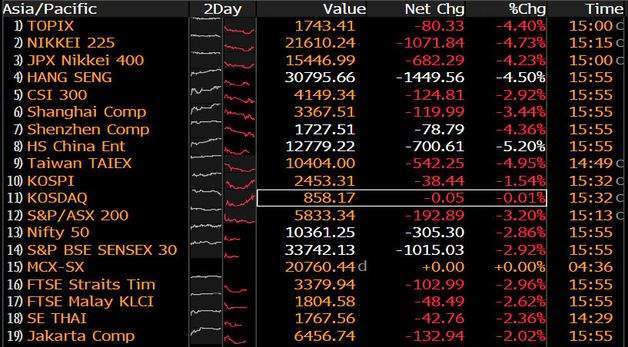 Asian investors ended the day in a sea of red. Source: Bloomberg

Tumbling markets have been blamed on a better than expected US jobs report on Friday. It stoked fears the US Federal Reserve could raise rates faster than the market had anticipated.

The global stock market has also been labelled as overvalued by many commentators in recent months. Last year the US Dow Jones Industrial Average was up 25 percent before dropping 1,175 points, or 4.6 percent to close down at 24,345.75 yesterday.

US president Donald Trump has claimed responsibility for the soaring US stock markets, claiming it illustrates business confidence in his administration and his policies.

In London, the FTSE 100 index of leading companies also fell to close down 1.46 percent or 108 points lower.

However, many market watchers remain confident the sell-off is not a sign of wider economic weakness.

We may have further weakness but I think we have to remember that to some extent we are adjusting to the fact that rates are rising. The economic background is still reasonably good. What’s happening is that years after the financial crisis, we’re finally coming out the other side and as that growth picks up and rates pick up, we’re adjusting to all of that. We have to bear in mind that rates are only rising because economies are strong enough to withstand that.

Investors are keen to diversify away from stocks, putting cash into assets like bonds and gold, both seen as safe havens in times of crisis.