Over a 20-year career, British artist Stuart Semple has developed a vast and wide-ranging portfolio with a theme of society at its heart. From helium-filled foam happy faces through a self-painting artwork to the blackest paint on the market, technology has played a vital role in his creative process.

Semple decided to be an artist when he saw a Van Gogh exhibition at the National Gallery as a child, but a near-death experience from a severe allergy aged 19 made him decide on art as a career.

“It really shook me up in lots of ways but I decided that all I wanted to do was art after that. I found I needed to make art to cope with what happened to me, and after that, it became my whole life rather than just something I was interested in,” he says.

Semple recently held a 20th Anniversary Show in Bermondsey, relying on friend and curator Lee Cavaliere to sift through mountains of work only a hyperactive creator could have generated. The marriage of art and technology in his work was very clear in his self-painting artwork that formed part of the exhibition.

“I always liked the idea of a painting that painted itself, or a machine,” he explains. “I remembered Andy Warhol saying he wanted to be a machine, which is why he got into screen printing. I was like, can a machine make art? Can it make emotional art? Can it make random art?”

Semple developed a special canvas that turns black when water touches it, using a simple pump mechanism to drip water onto the fabric. When it dries out it disappears. 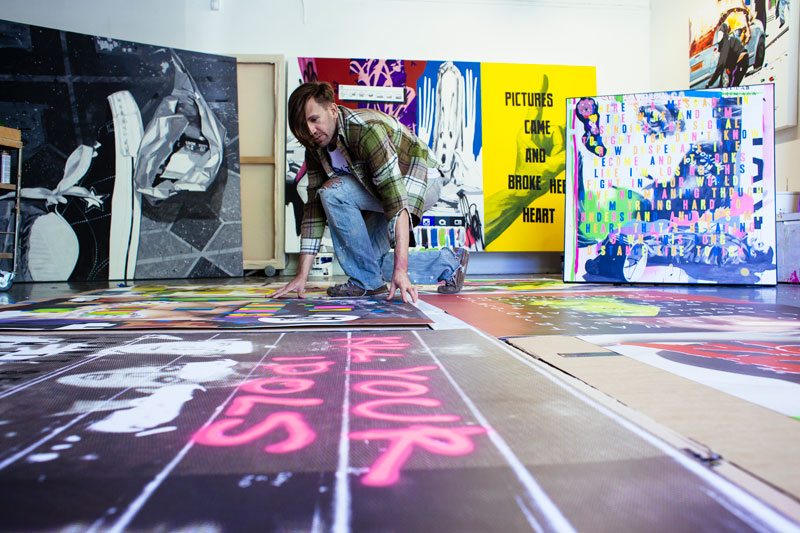 Happiness is a recurring theme in Semple’s art; he is a Mind mental health ambassador and was honoured by the UN with a Happiness Hero medal for his HappyCloud performance, which saw helium-filled foam smiley faces sail across the skies of London.

“The recession was bad and a lot of friends were suffering, art dealers were going out of business and all the newspapers were banging on about the credit crunch. It was a really bad time, just continual doom and gloom. I thought art should be doing something about it and I was waiting for the big artists to do something and no-one did anything.

“We heard about this snow machine that they use in movies and we started in Nevada putting helium through one of these things and made the snow float. We thought what if we put it through a stencil? We found we could make smiley-face clouds. We went down outside the Tate and set them off. Thousands of them floated towards the financial district just by fluke because of the way the wind was blowing that day and it was just like, oh my god is so perfect. That was the start of HappyClouds and the start of realising that public art can make an impact.” 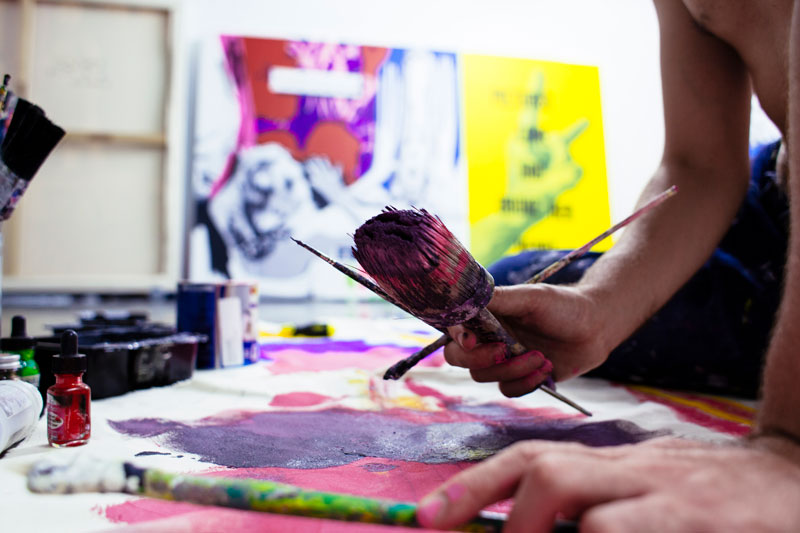 Semple has always mixed his own pigments and now sells them through his shop-cum-installation Culture Hustle. He hit the headlines after a very public spat with sculptor Anish Kapoor over the blackest black paint, and recently released the latest version of his own super-black pigment, Black 3.0.

“It’s taken up years of my life; it’s been a labour of love,” he says. “I have this belief that all art matters and all artists are important. About three years ago I heard that Anish Kapoor had the exclusive rights to use the blackest substance ever, Vantablack, in art, meaning no other artist could use it. I thought that was wrong.

“I’d been making my own paints for 20 years to use in my work and I had this really insanely bright pink and it dawned on me that I was just as bad as him; I had this amazing substance and I was keeping it to myself to use in my own work. So I put it up on the internet almost as a joke, and when you bought it you had to confirm that weren’t Anish Kapoor and you weren’t going to share it with him.

“I wasn’t expecting anyone to buy it; I thought they’d just laugh at the website and that would be the artwork. But the media got very interested in it, and it went viral. I ended up shovelling tonnes of paint into thousands of jars. Then [Kapoor] got his hands on the paint, dipped his middle finger in it, posted it on Instagram and all hell broke loose. The art community were saying ‘You’ve got to beat him, make a black’.”

Semple attempted to make a black paint and sent it to artists to use and comment on, effectively making paint development open source and resulting in a paint called Black 2.0.

“But I always thought it could be blacker,” he says. “By then I’d made some money so I managed to hire a scientist, Jemima, to work in the studio with me. She got really close to a super black, and we made our own pigment to this recipe and it was awesome, but we couldn’t afford to put it into manufacture because it cost £25,000.”

Semple launched a Kickstarter campaign and was amazed to raise half a million pounds, making it the second most-supported art Kickstarter of all time. 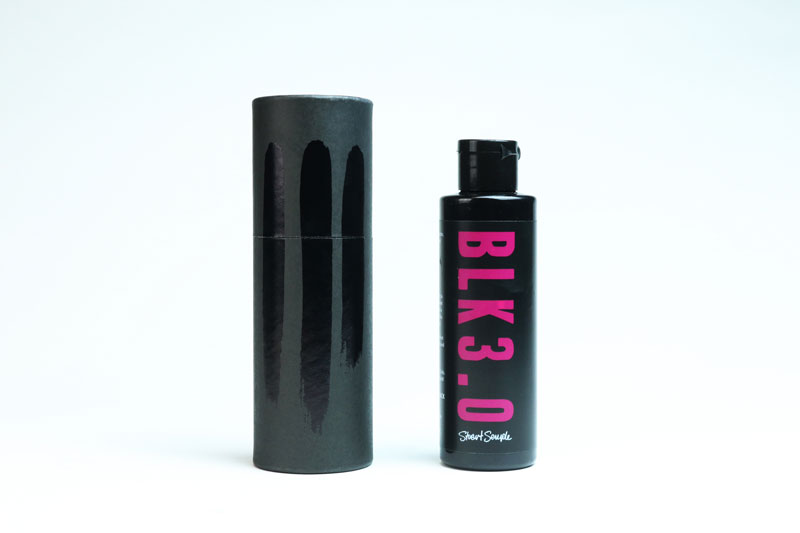 Stuart Semple’s Black 3.0, which is available to artists.

The race to the blackest

The ‘race to the blackest’ is well underway, with MIT researchers recently announcing a carbon nanotube-based black whose light absorption they tested by coasting a diamond. But Semple is determined that his black should be affordable by all artists and work like a paint, not only perform in laboratory conditions. He’s currently working with Jemima and two chemists to upgrade the recipe for Black 3.2.

“I think there could be a blacker black,” Semple admits, “but there are two things that nobody has got their head round yet. In the visual spectrum, black enough is black enough. After a certain point, you have to measure with a spectrometer so you can say it’s a percentage of a percentage blacker.  But for me and my community you deal with the things you see, so you don’t care if it reflects infrared or UV. For us, it doesn’t get any better than this, and as soon as it goes beyond this, it’s a chemical process that’s done in a lab, grown on aluminium in a vacuum chamber. It becomes unusable.”

Semple’s paint range doesn’t stop at black. He has also created Lit, which he describes as the ‘world’s glowiest glow paint’ which comes in a range of colours, can be charged with light or heat and glows for 12 hours as bright as a flashlight. It is being used for a number of interesting applications, such as road markings in developing countries. He has also made compostable glitter using bamboo resin as a cellulose base, avoiding the use of microplastics.

Semple says his ambition for his art is just to keep going and keep making stuff.

“There’s no big goal, but the fact I’ve managed to do it for 20 years is pretty awesome and if I’m still doing it in 20 years’ time I’ll be happy,” he says.

Read more: Technology and the contemporary artist: An interview with Bryan The Girl