In this week’s Spotlight we look at how the UK’s proposed Digital Markets Unit, designed to rein in Big Tech, could provide a lifeline to online journalism. The Verdict team has also highlighted some of the top technology journalism we’ve been reading from around the web, as well as key quotes, news and features from our own reporting.

If you’d like all of this sent straight to your inbox every Monday at 7am, subscribe here.

Why it matters: Zoom has been the financial growth story of the year. Since 1 January, the video conferencing company has seen its share price soar by 585%. In the previous quarter, it reported revenues of $663.5m – a 355% year-over-year increase – and net income of $185.7m. This quarter, analysts expect Zoom to report revenue of $694m, which would represent a staggering 317% year-on-year sales growth. But can it last into the post-pandemic reality? Investors are already weighing this up. On the day that Pfizer announced its vaccine candidate had a 90% efficacy rate, Zoom’s shares fell by 17%. This time next year it will be almost impossible for Zoom to match the same levels of growth. But the real question is whether Zoom has cemented itself as a long-standing enterprise tool that will stick around when offices fully reopen their doors.

Meanwhile, customer relationship management software provider Salesforce is expected to report healthy revenue growth of 16.3% this week, with analysts forecasting sales of $5.25bn for the quarter. While reduced SME software spend may see fewer sales in some markets, Salesforce’s acquisitions of Tableau and Vlocity are expected to have improved overall profit growth. Salesforce is reportedly in talks to acquire another remote working winner – Slack. The Wall Street Journal reports that a deal could be announced as soon as this week. The move could help Slack convert its success into higher profits, with Salesforce viewing the move as the next step in its enterprise offering.

How to follow it: Zoom reports its Q3 FY2021 results on Monday while Salesforce posts Q3 FY2021 earnings on Tuesday.

Who’s who at Web Summit

Why it matters: One of the main events on the technology calendar is here. Since 2016 Web Summit has been held in Lisbon, Portugal. Perhaps fittingly, the three-day event will be held via the web due to the coronavirus pandemic. The conference covers topics ranging from emerging technologies, AI, startups and tech policy. Web Summit is known for attracting big-name guests, and this year is no different, with the speaker list is a who’s who from the world of tech, politics, entertainment and sports.

How to follow it: You can book tickets (€) to attend the event here, which takes place Wednesday to Friday. We’ll be covering some of the top talks over at Verdict.co.uk.

Why it matters: AWS is switching Vegas for virtual rooms for its flagship conference, aimed at developers that build on its cloud platform. The event, stretched out to a three-week format, features keynotes from AWS leadership, including CEO Andy Jassy and CTO Werner Vogels. Presentations will cover technical areas such as machine learning and infrastructure. And of course, there will be plenty of breakout sessions and ‘ask the expert’ Q&As to keep cloud practitioners informed and up to date.

Partners will also be giving talks to share their experiences using AWS, which is the current cloud market leader and owned by ecommerce giant Amazon. There are also likely to be AWS product announcements. In October, The Information reported that AWS will use re:Invent to announce a multi-cloud management toolset so that companies could use rival clouds alongside AWS.

How to follow it: You can register to attend the three-week event for free here.

Verdict Magazine issue 6 is out now 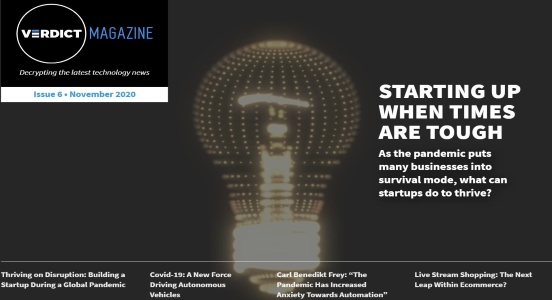 Verdict Magazine issue 6 is out now, providing the usual analysis, long reads and deep dives into the biggest topics impacting the world of technology. And this month we’re turning our attention to startups, the unique challenges they face during the pandemic and how some are thriving under difficult circumstances.

Spotlight on: The Digital Markets Unit, a lifeline for journalism?

This week the UK government laid out a plan to rein in Big Tech. The Digital Markets Unit – a part of the Competition and Markets Authority – will establish a code of conduct for companies with “strategic market status”, such as Facebook and Google, to regulate their use of consumer data. Although the exact powers the new unit will have are yet to be announced, the new code is intended to not only give users more choice over how their data is used, but also create a more level playing field for smaller businesses and content publishers to compete online. The Digital Markets Unit may have the power to “suspend, block and reverse” decisions made by tech giants and issue fines.

While this is significant for both big and small businesses in the world of tech, the news will also have an impact on the world of online news publishing, with many highlighting how the advertising-only business model has been damaging to journalism. A recent report by the House of Lords warned that government action is needed to re-evaluate the “dysfunctional” online ads market and the “fundamental imbalance of power” between publishers and social media giants, which pose an “existential threat” to digital news outlets. Last year, US Congress heard from news publishers to explore the impact of platforms such as Facebook and Google on online publishing. The new code will govern commercial arrangements between publishers and platforms in an attempt to “enhance the sustainability of high-quality online journalism”.

The extent to which the Digital Markets Unit will be able to control Big Tech’s influence in this area remains to be seen. And while the advertising-only model remains the norm, it is likely that high-quality online journalism will struggle to compete with Big Tech for advertising revenue. However, the announcement is a step in the right direction and a sign that calls to address Big Tech’s harmful impact on online news are being heard.

“By encouraging a digital mindset amongst staff and creating more broad and integrated teams, businesses will see that they do have the digital skills required to compete in the modern world. It isn’t always about finding new digital talent, but about harnessing the talent already at your disposal.”

European tech companies are beating Amazon at its own game

For Sifted, Maija Palmer and Tim Smith dive into the companies giving Amazon a run for its money (although Bezos’ billions remain very safe).

Your data and how it is used to gain your vote