Good morning and welcome to Tech Report Weekly 6 July. This week in tech the US assesses artificial intelligence’s role in contact tracing; futurists consider a post-Covid, disease-free world at Humanity+ and the UK’s energy committee hears from experts about the suitability of hydrogen as a renewable energy source.

We’ll also be shining the spotlight on the Facebook advertising boycott, which has continued to draw in more companies since launching last month. But will it ultimately lead to Facebook making policy changes?

The Verdict team has also highlighted some of the excellent technology journalism we’ve been reading from elsewhere, as well as key quotes, news and features from our own reporting. If you’d like all of this sent straight to your inbox every Monday at 7am, subscribe here.

Have a marvellous week and we hope you enjoy the Tech Report Weekly.

What’s happening: The House of Representatives Committee on Financial Services artificial intelligence (AI) task force meet virtually to explore how AI is being used in contact tracing apps and in Covid-19 research.

Why it matters: A few months ago, countries around the world hailed contact-tracing apps as a key part of tackling the coronavirus. Those hopes have somewhat faltered of late, with countries having various levels of success from their different approaches. In the US, it is down to individual states to work with the private sector to create their own contact tracing tools. Critics have called for more guidance from the White House and a national effort.

AI has also been used to analyse consumer and financial data related to Covid-19 to try and tackle the virus, but privacy experts have raised concerns that this may violate consumer privacy laws. The task force will hear evidence from Brian McClendon, CEO and co-founder of CVKey Project; Krutika Kuppalli, infectious diseases physician and Andre M. Perry, metropolitan policy programme fellow at the Brookings Institute.

How to watch it: The session takes place virtually on Wednesday at 12pm EDT, with video of the proceedings appearing here.

What’s happening: Humanity+, a non-profit membership organisation that advocates the ethical use of technology to expand human capacities, holds its first online conference exploring tech’s role in a post-pandemic world.

Why it matters: The past six months have demonstrated how woefully underprepared the world was for a pandemic like Covid-19. Could technology be the answer to avoiding the next outbreak? For futurists at Humanity+, the answer is yes.

“What humanity needs most right now is wise, imaginative, energetic, and compassionate thinking about how to use advanced science and technology to save, improve and advance life,” says Dr Ben Goertzel, chairman of Humanity+ and the man behind the brains of Sophia the robot. “This is how we’re going to defeat Covid-19, how we’re going to make sure we’re better prepared for the next global crisis.”

The conference will focus on three key topics that transcend the current pandemic: beyond mortality, beyond scarcity and beyond cruelty. Among the speakers are futurists Max More, Nell Watson and Dr Natasha Vita-More.

How to watch it: The event will be streamed on YouTube on Tuesday and Wednesday.

What’s happening: The UK’s Environmental Audit Committee holds an evidence session on the role that hydrogen could play in the country’s energy network.

Why it matters: The UK is aiming to reduce its carbon emissions to net-zero by 2050, the date that scientists say will be too late to reverse global warming if sufficient progress is not made. As part of this, the UK is exploring alternative energy sources to meet its goals. Hydrogen, a zero-emission fuel burned with oxygen, is one avenue being pursued as alternative to fossil fuels.

With its extensive offshore wind capacity and large gas network, the UK is well-positioned to take advantage of hydrogen technologies. However, hydrogen is difficult to store and not always environmentally friendly to produce. The process is also more expensive than non-renewables such as oil and natural gas. The UK and has already invested over £90m in hydrogen projects to find out how to overcome some of these challenges, including the Gigastack project, which uses offshore wind farms to decarbonise the process.

The evidence session will “consider the opportunities to maximise continued development and effectiveness of this technology, and the challenges faced by the industry in delivering greater capacity”.

How to watch it: The evidence session can be viewed online at Parliament TV from 9:30am on Thursday. 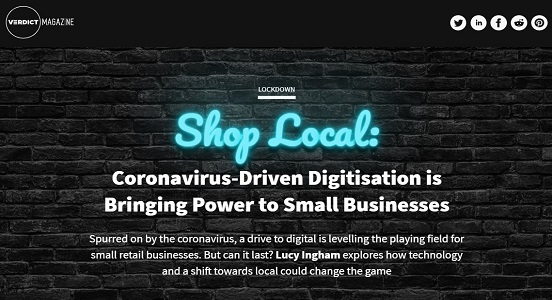 Spurred on by the coronavirus, a drive to digital is levelling the playing field for small retail businesses. But can it last? Lucy Ingham explores how technology and a shift towards local could change the game.

Since advocacy groups launched the “#StopHateForProfit” campaign on 17 June, the number of companies boycotting Facebook advertising has swelled to more than 800. The campaign calls for Facebook to implement stricter policies on racist and hateful content – particularly in the wake of the killing of George Floyd in police custody – and follows the firm’s handling of inflammatory posts from President Donald Trump.

Until changes are made, the campaign wants firms to hit Facebook where it hurts – its profits. What started with outdoor clothing company The North Face has grown to include the likes of Ben and Jerry’s, Starbucks and Verizon. What does Facebook make of it? Internally, the social media firm is not fazed.

“My guess is that all these advertisers will be back on the platform soon enough,” Facebook chief Mark Zuckerberg told staff in a private meeting, which was subsequently leaked to the Information. “We’re not going to change our policies or approach on anything because of a threat to a small percent of our revenue.”

Externally, however, Facebook is keen to limit the damage by offering smaller changes and by engaging with the advocacy groups behind the campaign. The more sceptical observers, however, have highlighted that now is a convenient time for firms to boycott Facebook – when advertising budgets have been scaled back because of the coronavirus. Nor is each boycott created equally, with Gizmodo reporter Shoshana Wodinsky discovering that most companies were not pausing advertising entirely. Some, for example, were continuing to advertise on Facebook-owned Instagram.

The sheer number of smaller advertisers that make up the bulk of Facebook’s $70bn annual advertising income shows no sign of slowdown, either. And most of the top-ten biggest advertising spenders on the platform continue to pour millions into Facebook’s coffers. The lost revenue probably won’t make a huge dent for Facebook – but it’s certainly not inconsequential either, and creates an unwanted publicity headache for the second-largest digital advertiser.

“There is a permanent shift towards ecommerce”: Ikea CDO

“Data is a tool and if you think about all kinds of tools, whether it’s a car or even something like a knife – a chef’s knife can make a Michelin star meal – it could also be a weapon of murder. So the intention, and how it’s used, is an important aspect there.”

William Davies takes on the complex misinformation challenges facing WhatsApp, in this wide-reaching and insightful piece for The Guardian.

Coronavirus has shown us a solution to the food climate crisis

Wired’s Hazel Sheffield explores whether lessons learnt from the Covid-19 pandemic could be applied to the food climate crisis.

For an example of “tech bro” attitudes with an extra serving of cliché, look no further than Motherboard’s piece about Silicon Valley millionaires sharing their scathing thoughts on tech journalism.