The UK prime minister Theresa May shocked everyone yesterday when she announced a snap general election to take place on 8 June.

After announcing the election, May had to put the prospect to a vote in the House of Commons. She needed two-thirds of MPs to agree to the election and passed it today with an overwhelming majority. A total of 552 MPs backed the general election, compared to 13 against.

Is the election all about Brexit?

Pretty much. May has called for the election in order to get a mandate from the public to carry out Brexit.

After triggering Article 50 in March, the prime minister now has two years to carry out negotiations with the EU to get the best deal for the UK.  She told the BBC that the new mandate would give her the “strongest hand” in the negotiations and will make it hard for people to “frustrate” the exit process.

She insisted that she trusted the British public, “and I am asking them to put their trust in me.”

“I genuinely came to this decision reluctantly having looked at the circumstances and having looked ahead at the process of negotiation. I want this country to be able to play the strongest hand possible in those negotiations and be in a position to get the best possible deal. That is in our long-term interest. That is what this is about,” said May.

What will be the other key topics in the election?

Tax seems to be high on the agenda. Earlier today, the shadow chancellor John McDonnell said a Labour government could hit “rich” people paid over £70,000 with more taxes to raise money for struggling public services.

As well, the future of the NHS is always high on the agenda during election time. Throughout the Brexit referendum period last year, the Leave campaign said the £350m figure the UK pays to the EU weekly could be spent on the NHS instead. Nine months on from the vote and the cash-strapped NHS is still struggling, despite the promises.

School reforms are one of the other topics that will form part of the election debate. May has said she wants to bring back grammar schools, a controversial notion, so this will be brought back into the public eye over the next few weeks.

Will there be TV leaders’ debates?

With less than 50 days till election day, no leaders’ debates are set to take place on TV according to Channel 4.

In 2015, a YouGov poll demonstrated that voters were overwhelmingly in favour of televised debates, with around 69 percent agreeing that there should be TV debates during the election campaign. As part of the poll, 57 percent said they thought the leaders’ debates were good for democracy.

According to a report by Ofcom, the majority of adults, around 67 percent, see TV as their main platform for news, so it is an effective way of reaching the public.

However, ITV’s royals editor took to Twitter to say the channel would be holiding TV debates, regardless of Downing Street’s currently policy, so this could be a factor in this year’s election after all.

What do the current polls say?

YouGov’s latest polling figures recorded voting intentions for the Conservative party at 44 percent, giving the Tories a 21 point lead over Labour, who are lagging behind with 23 percent. 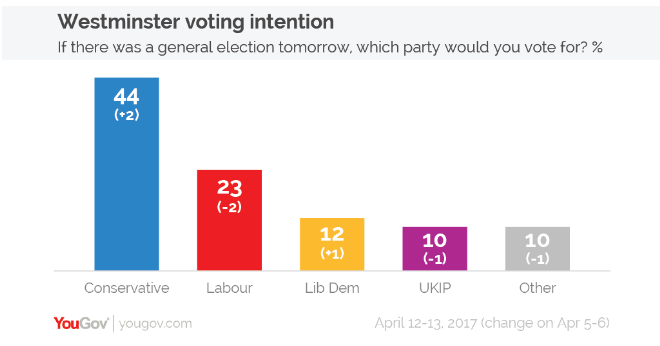 The Conservatives are leading in the polls

These results represent the lowest voting intention share for Labour since June 2009.

As well, May is considered the favourite choice for the role of prime minister with 50 percent of those surveyed preferring her to Labour leader Jeremy Corbyn.

May is considered to be the best candidate for prime minister

When was the last snap election?

The UK hasn’t held a snap general election since October 1974. This is because in recent years governments have managed to have fairly strong majorities, or formed coalitions such as the Conservative-Liberal Democrat coalition government in 2010, which means leaders are less likely to face a vote of no confidence in the Commons, or order a new election in order to win a bigger majority.

In 2011, the UK parliament passed the Fixed-term parliament act, which ensured that elections would be held every five years unless two-thirds of the commons agree to the election.

How has the market reacted so far?

The pound rose yesterday but overall the stock market slumped in response to the news of the election.

“The call for a snap election was a bold one by Theresa May. It looks a smart move to make sure the government and May have as much control as possible over the future of the Brexit deal.

The markets reacted with short term lows below 1.25200 against the USD but quickly erased all gain and is now targeting 1.27. I for see every trade deal the UK does to be a further spike in the GBP against the UDS and EUR. With the GBP/USD hitting 1.50 by the end of the year and the GBP/EUR hitting 0.80000.”