The UK’s prime minister Theresa May has finally conceded to the march of time and today upgraded from a Blackberry to an iPhone.

The prime minister – whose Maidenhead constituency is home to Blackberry’s European headquarters – had resisted upgrading to the iPhone, even after they were phased in for the rest of her Downing Street team.

Once cutting edge for allowing users to check their emails on the fly, Blackberries have long since lost their corner of the smartphone market to Android models and the iPhone.

World leaders including French President Emmanuel Macron and US President Donald Trump have all been forced by their security and advisers to adopt Apple’s iPhone.

The rise and fall in the popularity of the Blackberry smartphone can be seen in the company’s share price, which peaked shortly after the iPhone was released. 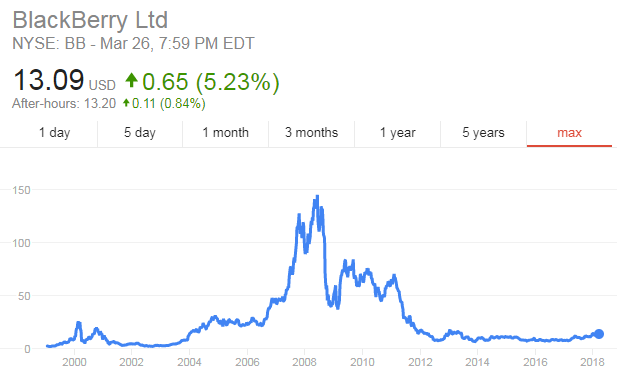 But May persevered until this year, getting aides to fix her increasingly outdated model rather than upgrade.

According to Politico, however, her new iPhone won’t be much fun, due to strict restrictions on apps that Whitehall places on top government officials. Whatsapp and Facebook are out, as is the Telegraph newspaper app (but, interestingly, not the Guardian app).

May will also not be allowed to install her colleague Matt Hancock’s eponymous app, which has suffered data leaks.

This might be a relief to May, who joked about it at this year’s Downing Street correspondents dinner.

May is not the only powerful female politician reluctant to give up her Blackberry.

Read more: The smartphone turns 25: here are the five major milestones of the device

US Democrat presidential hopeful Hillary Clinton was reportedly wedded to her Blackberry Curve, getting her staffers to buy the model off Amazon or eBay even after Blackberry stopped making them.

Clinton’s insistence on using her Blackberry in 2016 was partly responsible for the investigation into her use of official and non-official email addresses.

Blackberry, formally known as Rim, has struggled in recent years to keep pace with the latest smartphones.

Despite a terminal decline in sales Blackberry phones are still considered some of the most secure in the world. It has boasted it makes “the world’s most secure Android smartphone”.