If you crack your phone screen and take it to a high-street phone repair shop, there’s a chance that hackers may be able to access your information.

Researchers from Ben-Gurion University of the Negev found cyber criminals are able to connect malicious chips to new screens on a Huawei Nexus 6P smartphone and an LG G Pad tablet, allowing them to steal passcodes, install snooping apps, perform unauthorised downloads, and take photos of the user.

Most worrying of all is that the screens used by hackers look identical to the real thing, so there’s no way of telling whether it is compromising your data or not. 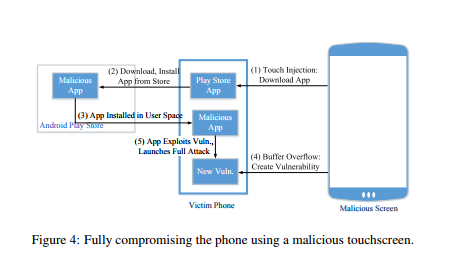 The researchers added that other devices, including iPhones, are also vulnerable — anyone with temporary access to your handset can install spyware.

The threat should not be taken lightly. Attacks by malicious peripherals are feasible, scalable, and invisible to most detection techniques. A well-motivated adversary may be fully capable of mounting such attacks in a large scale or against specific targets.

Half of smartphone users worldwide have experienced a cracked screen at least once, according to research carried out by Motorola in 2015.

Last week, the telecommunications company applied for a patent on a phone screen that can repair itself if it gets damaged.