As insurgents loyal to Donald Trump used violence to siege the Capitol building in Washington, Facebook and Twitter finally found their red line and suspended the outgoing president.

The unprecedented move was in direct response to a video posted by Trump on Wednesday to Facebook, Twitter and YouTube in which he praised the rioters who stormed the building at the heart of US democracy. “I love you,” he told them as he asked them to go home.

Trump’s call to end the attempted insurrection was undermined by his repeating of false claims that the election was “stolen”, giving legitimacy to the thousands gathered on Capitol Hill to protest the certification of Joe Biden’s election victory.

The attack traces its roots to earlier that day when Trump told crowds of supporters that “you’ll never take back our country with weakness, you have to show strength and you have to be strong”.

Hours later that same crowd smashed windows and doors to gain entry to the Capitol, sending it in to lockdown and disrupting lawmakers from certifying Biden as the next president.

Four people died during the attack on the Capitol, which has drawn strong condemnation from around the world. An improvised explosive device and several suspicious packages were discovered nearby and destroyed by law enforcement.

After posting his video, Trump took to Twitter and Facebook to tell his supporters to “remember this day forever”.

“These are things and events that happen when a sacred landslide election victory is so unceremoniously and viciously stripped away,” Trump added.

Some 2,800 miles away in Silicon Valley, social media safety teams scrambled to get on top of a spiralling situation.

How the social media giants reacted

Having already been viewed millions of times, Facebook removed Trump’s video for inciting violence, while YouTube removed it for “violating policies on spreading election fraud”.

Twitter initially left the video up with the tag “this tweet can’t be replied to, retweeted, or liked due to a risk of violence”. Eventually it followed suit and deleted the video too.

The extraordinary move was followed by another first – the temporary suspension of his Facebook and Twitter accounts.

“We’ve assessed two policy violations against President Trump’s Page which will result in a 24-hour feature block, meaning he will lose the ability to post on the platform during that time,” Facebook said in a statement.

Meanwhile, Jack Dorsey’s Twitter locked Trump out for 12 hours and required him to delete three offending tweets or have risk account deleted permanently. 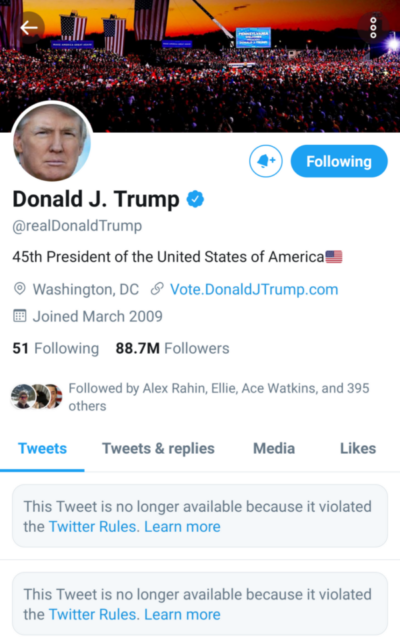 Snapchat has also blocked Trump from creating new posts, but did not say for how long.

Facebook said it will also introduce new rules to stop the spread of posts glorifying the Capitol occupation, including a block on the #StormTheCapitol hashtag.

“This is an emergency situation and we are taking appropriate emergency measures, including removing President Trump’s video,” said Guy Rosen, Facebook’s vice-president of integrity, in a tweet.

“We removed it because on balance we believe it contributes to, rather than diminishes, the risk of ongoing violence.”

On Thursday, Facebook said it has banned Trump “indefinitely” for at least the two remaining weeks before Biden’s inauguration.

“We believe the risks of allowing the President to continue to use our service during this period are simply too great,” said Facebook CEO Mark Zuckerberg in a statement.

“Therefore, we are extending the block we have placed on his Facebook and Instagram accounts indefinitely and for at least the next two weeks until the peaceful transition of power is complete.”

Four years in the making

Yet the warnings signs have been plain to see for more than four years.

During the 2016 election campaign Trump infamously told a rally that he could “stand in the middle of 5th Avenue and shoot somebody and I wouldn’t lose voters”.

During the Black Lives Matter protests, Trump incited violence by tweeting ‘looters get shooters’, which was hidden by Twitter and prevented from being shared.

He has used the far-reaching platform granted by Twitter and Facebook to threaten nuclear war, spread conspiracies, undermine public health messaging during a pandemic, smear political opponents and denigrate his own citizens.

On balance, Trump’s presence on social media has contributed to, rather than diminished, the risk to democracy and decency.

QAnon, the jumbled conspiracy theory that says Trump is waging a secret war against Satan-worshipping paedophiles embedded in US institutions, were forged in underground forums such as 4chan.

In August, Facebook began taking down more than 10,000 QAnon and US militia group pages where baseless conspiracies were allowed to spread.

The march on the Capitol was organised on social media sites, including dozens of ‘Stop the Steal’ Facebook groups that still remain active.

This was an attack organised, mobilised and live-streamed via social media. Rioters rampaging through the Capitol chambers posed for pictures with stolen property or behind computer desks – selfies packaged up for a social media audience.

“These people were all radicalised on Facebook. This event was organised on Facebook,” said Cambridge Analytica whistleblower Christopher Wylie. “This violence is an inevitable manifestation of the conspiracy, vitriol and hate fed to people daily on Facebook.”

Many are now asking why Trump’s accounts haven’t faced stricter punishment in the past where others have been banned for less.

For the journalists and researchers who have spent years documenting the rise of online conspiracy groups, the siege of the Capitol building appears as an almost a natural, inevitable conclusion and a stark reminder that actions online have real-word consequences.

“And yet, for researchers studying these online networks and the participatory dynamics of disinformation, there’s this strange comfort — everyone else can finally see what we’ve been seeing… for years.”

Too little too late?

During Trump’s presidency even his sharpest critics have argued against his deplatforming, in the hope that shining a light on Trump’s behaviour would hold him to account.

It was always likely that banning him would force him onto alternative social media sites, such as the right-wing echo chamber Parler.

But for many, temporarily suspending Trump’s accounts now is merely closing the stable door after the horse has bolted.

That it took a disorderly and unsuccessful coup attempt, egged on by Trump, to earn temporary suspension points to deep flaws with social media moderation.

Indeed, the restrictions placed by Facebook on Trump appear to have done little to silence his dangerous messaging.

According to CrowdTangle, a tool to analyse social media trends, six of the 10 most popular Facebook posts in the past 24 hours were made by Trump.

Before the Capitol attack there had been speculation that Twitter might deplatform Trump after Biden’s inauguration on 20 January, when he will face different rules a private citizen.

Wednesday’s events will heap pressure on social media executives to follow through with this. Once Biden is sworn into office, there is no longer any grounds to give him a platform that gives him an unfiltered dialogue with billions.

“There have been good arguments for private companies to not silence elected officials, but all those arguments are predicated on the protection of constitutional governance,” said Alex Stamos, former chief security officer at Facebook.

“Twitter and Facebook have to cut him off. There are no legitimate equities left and labelling won’t do it.”

The American poet Maya Angelou famously said that “when people show you who they are, believe them”.

For four years Trump has shown social media giants exactly who he is. It’s time they started believing him too.