Despite the market woes caused the Brexit vote and the devaluing of the pound, the UK could be the fastest-growing economy in the G7 over the next 34 years.

According to PwC’s latest World in 2050 report published today, the UK could remain a top 10 global economy in 2050, despite the vote last June to leave the European Union which caused medium-term drag.

In order to achieve this, the UK will need to remain open to talented workers and developing successful trade links with fast-growing emerging economies.

In the report, which looks at how the global economic order will change over the next 34 years, PwC believes the UK has a potential average annual growth of around 1.9 percent.

This position is sustained by its relatively larger projected working-age share of the population than in most other advanced economies – meaning UK workers are expected to remain in jobs for a longer period of their life, forcing later retirements.

However, this position will be in part due to the talent the UK can attract from different countries. This might prove difficult, as the Chancellor Philip Hammond recently made a speech stating the UK will end freedom of movement.

If the UK does continue to subvert the negative Brexit process, it will fall just one place, from ninth to tenth on the global economy rankings in purchasing power parity (PPP) terms by 2050.

John Hawksworth, chief economist at PwC, said in a statement:

“Our relatively positive long-term growth projection for the UK is due to favourable demographic factors and a relatively flexible economy by European standards. However, developing successful trade and investment links with faster-growing emerging economies will be critical to achieving this, offsetting probable weaker trade links with the EU after Brexit.” 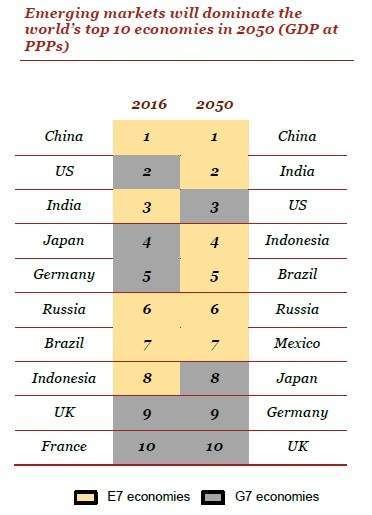 Elsewhere, the report forecasts that China will continue to dominate the world economy in PPP terms and will move further ahead by 2050. Interestingly enough, India, which is currently in third place, is projected to overtake the US in the next 30 years.

In addition, Indonesia is expected to overtake Germany, Japan, Brazil and Russia by moving up to fourth place.

One of the reasons for Indonesia’s expected growth is down to fast educational catch-up rates, which will be an important factor in its growth performance.

These countries are expected to grow at an annual average rate of 3.5 percent over the next 34 years, and will drive the growth of the world economy.

The E7 could comprise almost 50 percent of world GDP at PPS by 2050, whereas its predicted that the G7’s share should decline to just over 50 percent.

Nigeria is expected to be the fastest-growing large African economy, with PwC predicting it could move up the GDP rankings from 22nd place to 14th by 2050.

However, the country needs to diversify its economy away from oil and strengthen its institutions and infrastructure if it is to realise its potential. 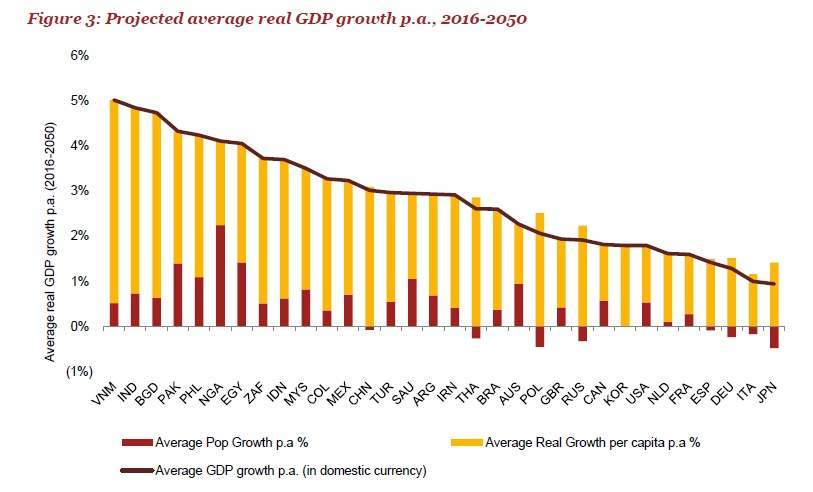 The report also outlined the increasing global uncertainty facing countries across the world. These range from social and economic uncertainties, stemming from climate change as well as “considerable political uncertainty” from the UK’s Brexit vote and the election of president Trump in the US.

PwC believes countries need to diversify in order to ensure they continue to grow over the next few decades, to offset these uncertainties.

“The global economy faces a number of challenges to prosperous economic growth in the long-term.

“Falling global trade growth, rising inequality and increasing global uncertainties are intensifying the need to create diversified economies which offer opportunities for everyone in a broad variety of industries.”

Ultimately, in order to succeed over the next 34 years, Hawksworth suggested business will need to “adopt strategies with the right mix of flexibility and patience to ride out the short-term economic and political vitality that is a normal feature of emerging markets as they mature.”