Boris Johnson, broom in hand, was one of many iconic images to come out of the London riots.

For six days back in August 2011, the capital descended into chaos. Fires raged and looters ransacked shops in protest against the police killing of Mark Duggan.

Six years on, Boris’ broom could be set to make a comeback. 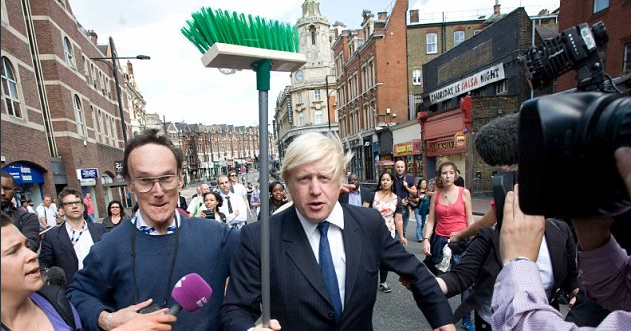 The Foreign Office has confirmed that the former Mayor of London will be travelling to the Caribbean in the wake of Hurricane Irma.

The powerful tropical cyclone, which peaked at Category 5 as it passed over British territories such as the Virgin Island, Anguilla and Barbuda, has devastated the Caribbean.

Estimates have placed the cost of rebuilding following Irma at up to $300bn.

Despite reluctance, as the United Kingdom’s foreign secretary, Johnson will be flying to the Caribbean in order to meet those affected and view the UK’s relief efforts.

It may have taken a firm push from the opposition, but Johnson has stepped up when few others would.

How have Britain’s politicians responded to Hurricane Irma?

Irma left a path of destruction behind her. This prompted current Prime Minister Theresa May to increase relief funds from £12 million to £32 million.

Likewise, she also made the decision to fly hundreds of British troops to the Caribbean in order to help with relief efforts following an emergency Cobra meeting.

Pressure has been put on May to visit the areas devastated by the hurricane. French president Emmanuel Macron and King of the Netherlands Willem-Alexander have made their way to the Caribbean.

However, May has refused to bow down to pressure.

Many have been critical of the government’s response to the crisis.

While expected, given his position as the biggest challenger to May’s Tory government, Jeremy Corbyn has been particularly critical.

The Labour leader insisted that the Government should have acted “much faster”:

“It was entirely predictable what was happening and also very clear that because of the trajectory it was going to make landfall somewhere in the eastern Caribbean, Cuba, or Jamaica or Florida.”

Fellow Labour Member of Parliament for Earling Southall Virendra Sharma shares Corbyn’s views. He insisted that Britain failed to prepare for Hurricane Irma adequately, despite knowing that it would strike.

Johnson, unsurprisingly, has refuted such claims.

The eccentric politician has insisted that the government’s response has been strong. Likewise, he also took the time to confirm that the £32 million relief fund would be increased further.

Defence Secretary Michael Fallon, meanwhile, has insisted that the UK has responded quickly and done more than enough:

“It wasn’t by chance that Mounts Bay, a huge 16,000-ton aid ship with marines, with helicopter, with pallets of aid, was in the Caribbean.”

The UK response to Irma has been largely one of bickering and point scoring. Meanwhile, those in the Caribbean attempt to pick up the pieces of their lives left in a pile of rubble by the cyclone.