Suspicious trading activity ahead of public takeover announcements remained at a high of almost 20 percent in 2016, according to data published the UK financial watchdog.

In its annual report the Financial Conduct Authority (FCA) said it wanted to:

However, last year, as many as 19 per cent of UK takeover announcements were preceded by abnormal price movements (APPMs), which can be a sign of market abuse.

The figure shows no improvement on 2015.

In 2014, the APPMs figure hit a low of 14.3 per cent, following a crackdown on insider trading by the FCA and its predecessor, the Financial Services Authority (FSA).

It was not until 2008 that the FSA started prosecuting insider trading. 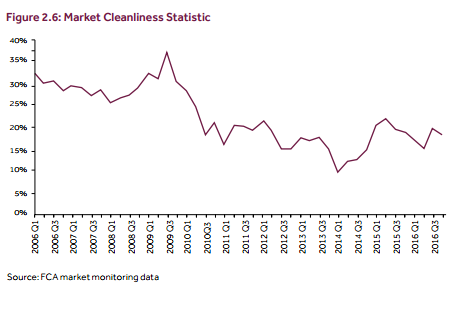 Although 19 percent is low compared to the four years before 2009, when the figure was as high as 30 percent, the FCA is keen to bring it down.

The FCA makes clear that market abuse is not the only possible cause for price spikes, but APPMs can be good indicators of suspicious trading activity. Its report said:

Many other factors could cause an abnormal price movement before a takeover announcement. For example, factors such as financial analysts or the media correctly assessing which companies are likely takeover targets or significant, but normal trades that just happen to fall before an announcement.

The FCA has made targeting insider trading a key priority.

Last year, a high-profile £14m case dubbed Tabernula brought by the regulatory body culminated in a number of convictions after a 12-week trial.

A former Deutsche Bank managing director and an ex-finance director at Topshop were found guilty of “persistent, prolonged, deliberate, dishonest behaviour” in May 2016.

Since then, there have been smaller cases of insider trading.

Mark Lyttleton, a former BlackRock trader, was sentenced to a year in prison after pleading guilty to using inside information to trade in the securities of EnCore Oil and Cairn Energy in December.

We will continue to monitor the results and gather market intelligence to enable us to draw robust conclusions about the underlying trend in insider trading activity.