US retail giant Walmart is shelling out $16 billion for control of Indian ecommerce platform Flipkart in a bid to cash in on India’s fast-growing economy.

Walmart will acquire a stake of around 77% in the ecommerce giant.

The acquisition was revealed on a SoftBank earnings call, after the Japanese conglomerate posted record annual profits. SoftBank is one of Flipkart’s largest shareholders.

The deal comes as Walmart jockeys with Amazon for a slice of the Bangalore-based retail giant in what has become a scramble for the Indian online retail market.

Last week news broke that Amazon made a bid to acquire 60% of Flipkart, just as Walmart was in the final stages of negotiations for a 55% stake.

US investment bank Morgan Stanley said the country’s ecommerce market could be worth an annual $200 billion in as little as a decade.

Following the announcement Walmart confirmed the deal and said its long-term aim was to turn Flipkart’s transition into a publicly-listed subsidiary.

The remainder of the business will be held by existing investors, including Flipkart’s co-founder Binny Bansal, Chinese investors Tencent, Microsoft, and Tiger Global.

India is one of the most attractive retail markets in the world, given its size and growth rate, and our investment is an opportunity to partner with the company that is leading transformation of e-commerce in the market.

Walmart’s investment in Flipkart includes $2 billion of fresh equity funding. Walmart said it will use a combination of newly issued debt and cash to finance the round.

The two companies are in talks with other potential investors to join the investment, which could reduce Walmart’s stake.

The deal is expected to close later this year.

Flipkart, which sells everything from mobile phones, to electronics, trainers, books, jewellery and beauty products, was founded by Sachin Bansal and Binny Bansal in 2007.

Similar to US rival Amazon, Flipkart started as an online bookstore and has grown its customer base into 100 million registered users, with an online marketplace of eight million products across over 80 categories.

Walmart’s share price fell by around 5% in the pre-market after the deal was announced. 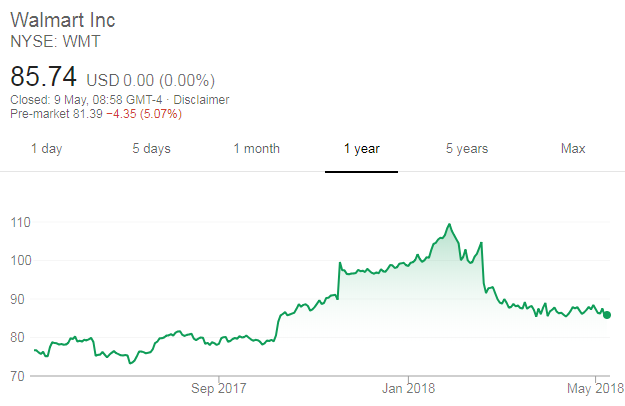