Earlier this week, it was announced that Apple is breaking away from UK chip developer Imagination Technologies.

Apple uses Imagination’s tech to develop chips in its iPhone and Apple Watch products and owns an eight percent stake in the business. However, investors at Imagination have been told that the Silicon Valley-based company will stop using its intellectual property within two years.

Yesterday morning, the UK-based company’s share price dropped around 70 percent after the news was released, in part because it is thought around 35 percent of its revenues come from Apple.

Apple has been Imagination’s biggest customer for years, using the company’s technology and intellectual property to form the basis of its graphics processor units (GPUs) in its iPhones, iPads, TVs and watches. Despite this relationship, Apple reportedly wants to part ways in order to develop its own technology to power its devices.

It isn’t only Imagination that will be hurt by Apple’s new decision. It also uses technology from two other UK-based chip companies: ARM and Laird. When Apple has been hurt in the past by slowdowns in iPhone sales, these companies have also had to take a hit. The question is now, how affected will they be by this new decision too?

ARM Holdings, the semiconductor and software design company, made headlines last year when it was bought by the Japanese company Softbank, in the biggest tech acquisition to take place in the UK ever. The £24m deal was also announced just after the Brexit vote when sterling had fallen against the dollar, and demonstrated that maybe Britain would be ok in a post-Brexit world.

SoftBank acquired ARM to make headways into the Internet of Things (IoT) market, using its patented microprocessors that Apple also uses. However, as a result of this acquisition, ARM might not suffer too much as a result of the change in policy.

In addition, brokers Liberum Capital has said in the past that only 10 percent of ARM’s revenues come from Apple, making the company less exposed to changes such as this.

Laird, like Imagination, also considers Apple to be its biggest customer. Barclay’s analysts have estimated that Apple is responsible for 17 percent of Laird’s revenues, which means a decision like this could have a huge impact on the business.

The company has been struggling recently. Last year, its annual profits fell sharply as a result of a downturn in its smartphone components business. Its full-year pre-tax profit for 2016 was around £50m, less than the analysts’ expectations of £75m.

In particular, this is thought to have been as a result of the difficulties Samsung, one of Laird’s key customers, faced last year with its exploding Galaxy Note 7 phones.

What’s going to happen to Imagination?

Imagination managed to slightly recover from yesterday’s significant drop in the market and is currently up by 10 points. 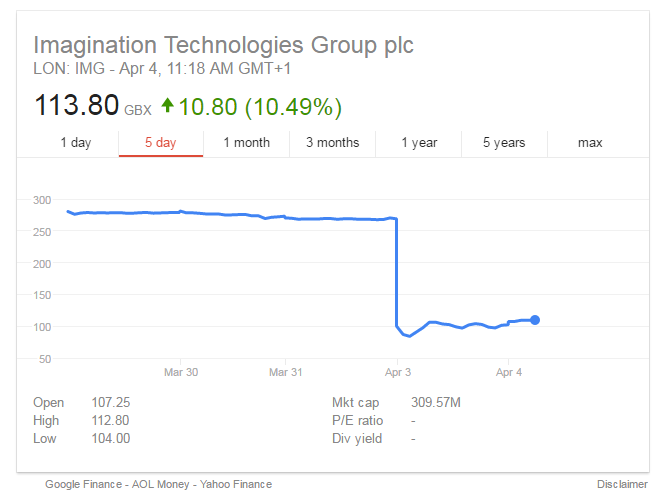 In a report by technology analysts Nick James and David Larkam at Numis Securities, Imagination is reportedly in talks with Apple for a potential royalty agreement.

This is because they believe it would be “near impossible” for Apple to create its own GPU that wasn’t a replica of Imagination’s, due to Apple’s reliance on the tech for so many years, which puts Imagination in a good position to arrange a one-off payment for a perpetual license to the patent.

The case against Apple, which has been actively using Imagination’s IP (intellectual property) for a decade, could be very strong if it tried to go it alone without a commercial agreement with (or ownership of) Imagination,” they said.

As well, they predict that an agreement of Apple to license Imagination’s patents could eventually see Apple acquiring the company, as this would give “it full ownership and control of the IP, combined with a semiconductor engineering team of scale with talents in key strategic areas.”

Apple did look into purchasing Imagination last year but confirmed to the London Stock Exchange in March 2016 that it ultimately did not make an offer. Business Insider reported that Apple proceeded to hire several senior employees and engineers from Imagination anyway, it was described as a “brain drain” for the company.

However, if no agreement is reached, James and Larkam believe Imagination could sue Apple for patent infringement once their agreement ends in 2018.

If Apple does ditch the likes of Imagination, ARM and Laird, it will be able to take full advantage of its recent upturn in smartphone sales. According to IDC’s latest figures, Apple managed to beat Samsung to be the top smartphone seller, with around 800,000 more shipments than the South Korean company in 2016.

As well, IDC predicts sales to grow even more for Apple this year once its tenth anniversary iPhone is released in September, which IDC believes, “all signs point to something very special for the tenth anniversary of this iconic product.”