3D printing, or additive manufacturing, is the process of joining materials to make objects from three-dimensional model data, usually layer upon layer. This contrasts with traditional subtractive manufacturing technologies in which parts of a large block of material are selectively removed. So what is 3D printing in business and how will this technology be a game-changer in industries?

Most additive manufacturing systems use a digital blueprint created by 3D computer-aided design (CAD) software. Additive manufacturing can produce complex shapes and structures that could not easily be produced using traditional machining methods. There are eight primary additive manufacturing technologies, each using different build materials ranging from plastics to metal alloys. Material extrusion is the cheapest and most popular technology, using mainly plastics as the build material, but it is mechanically imprecise. Direct metal deposition and powder bed fusion, by contrast, are more expensive technologies, used predominantly for printing high-precision, high-strength metal parts.

Today, 3D printing is not commonly used as a replacement for volume manufacture, where the technology and material costs mean that other manufacturing approaches are more suitable. However, it is now widely used in prototyping across a number of sectors where it can significantly lower the cost of development. 3D printing is also seeing strong traction in aerospace, by dramatically changing the economics associated with the one-off manufacture of precision components. 3D printing is currently being explored in new contexts as well, most notably in construction and medicine.

One of the most interesting 3D printing companies is Organovo, the world leader in bio-printing. This technology uses live cells to create human tissue or human organs. It is developing 3D printers which can create replacement lungs, kidneys or livers.

Why does 3D printing matter for business?

Today, the consumer electronics and automotive industries are the largest users of 3D printed parts. The most common use of a 3D printer is to directly manufacture component parts. In 2017, about 30% of all 3D printers sold were used to directly print component parts, up from just 4% a decade ago, making direct part-production the fastest growing application for additive manufacturing. Visual aids and presentation models are the next most common application, together accounting for 20% of all spending on additive manufacturing systems. A fifth of all spending on 3D printers came from the consumer electronics industry, with the automobile industry accounting for just under 20%, followed by medical, aerospace, and industrial applications.

3D printing is taking hold, but the major impact is between three and five years away. The market for industrial additive manufacturing has seen steady growth, albeit not at the same rate as the market for personal or desktop systems. So, the industry poses no immediate threat to traditional manufacturing industries, and the change it brings about is more likely to be gradual than revolutionary. Evidence from the early adoption of 3D printing technologies does, however, point to the fact that, in some industries, the disruption will be significant.

What are the big themes around 3D printing?

Research and development investment in printing materials continues to deliver innovation. In metallic 3D printing, new alloys and compounds are lowering the cost and increasing the effectiveness of metal printing. Cemented carbide, a carbon compound, is comprised of fine particles of carbide bound together with a binder metal. Developed in Germany, cemented carbide objects can be printed using binder jetting, and produce objects that are both strong and highly durable. Other material research is taking place in construction, creating compounds of cement, in bio-printing, creating biological structures, and even in food manufacture, from pasta to pastry.

With the entry of HP into the industrial printing segment, there will be a strong drive to scale-up industrial 3D printing platforms both in terms of form factor, an aspect of the hardware that prescribes size and shape, and throughput. HP’s stated objective is to radically increase the speed at which custom parts can be printed, creating the real possibility that 3D printing could form a standard part of the manufacturing processes for consumer electronics, mass-manufactured objects, and high-volume engineering.

3D printing is already used in healthcare but is still largely seen as a novelty. However, over the next 12 to 24 months, 3D printed implants will complete the first stages of clinical trials and the stage will be set for 3D printing to become a standard part of the healthcare portfolio. In bio-printing, the printing of replacement organs remains more than a decade, and many clinical trials away, but bio-printed products will begin to be used in the testing and assessment of new pharmaceutical compounds and medical techniques.

So far, we have seen a small number of headline-grabbing “mega printers”, used in large-scale applications like engineering and construction. At this stage, most of these machines are proof of concept (POC) products. However, over the next two years, there will be a range of mass-produced large, or super-large, platform 3D printers that are sold and supported on a commercial basis.

While the software market is already well-populated with professional, low-cost, and free-to-use 3D modelling software, this market will continue to evolve. Today, 3D modelling still requires a considerable degree of skill, and a background in CAD is still a highly useful skill. With the lowering cost of personal 3D printers, the design software will follow suit by lowering the barrier to entry in terms of skill and experience. Service providers already provide a “send from desktop” service which allows customers to transmit 3D models directly to a third-party for printing, these services will become increasingly sophisticated on one hand, in terms of the options that are available, while becoming easier to use on the other.

What is the history of 3D printing?

Additive manufacturing methods have been discussed in academic circles since the 1950s. But when Chuck Hull, co-founder of 3D Systems, patented his stereo-lithography process in 1988, the commercial 3D printing industry was born.

In 1988, 3D Systems introduced the SLA-1 Rapid Prototyping System which, at the time of its release, was the first commercially available additive manufacturing system in the world. At the same time, Hull continued to build up a patent portfolio of additive manufacturing technologies such as the STL file format, which is still used today to complete the electronic ‘handshake’ from CAD software to 3D printer.

Over time, several new additive manufacturing technologies were developed. They used different materials, carried different cost-profiles and catered to different industries. For example, selective laser-sintering, a type of powder bed fusion, first appeared in 1992, while direct shell production casting, a kind of binder jetting, appeared a year later. Another milestone was passed in 1996 when 3D Systems sold its first 3D printer that used a material jetting process, called the Actua 2100. 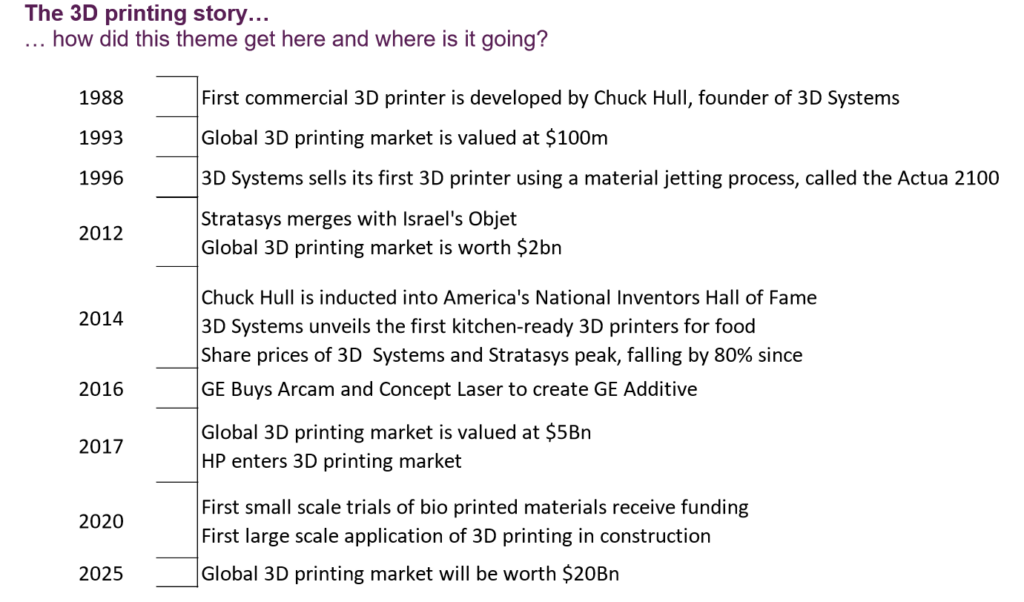