iPhone maker Apple will be reporting its fourth quarter and full year results today after the US markets close at around 10pm London time. Here’s what to look out for after the bell rings.

1. Revenues are set to rise

Revenues are expected to have climbed two per cent to $77.4bn — which would make this Apple’s highest earnings in a single quarter ever.

Apple projected sales of between $76bn and $78bn, and Wall Street is inclined to agree with its consensus around the $77bn mark.

2. The iPhone is back

It is expected to have sold 78m smartphones in the fourth quarter of 2016, up from 75m a year ago potnetially giving it a little more time to look beyond its iPhone cash cow.

According to GlobalData, sales of the iPhone will dip in Western Europe in coming years but are likely to remain consistent in the US and Asia Pacific.

3. The devil is in the detail

iPhone sales are set to be up but it will be important to keep note on the average selling price.

This will let investors know if the sales are for Apple’s latest products or if consumers are holding out for the iPhone 8 which is set to be announced in September.

Analysts at Cowen have predicted that around 40 percent of the iPhone 7 units sold globally were for the high-end iPhone 7 Plus.

But Barclays believes customers were instead opting for the iPhone 6S, which is around $100 less than the iPhone 7. 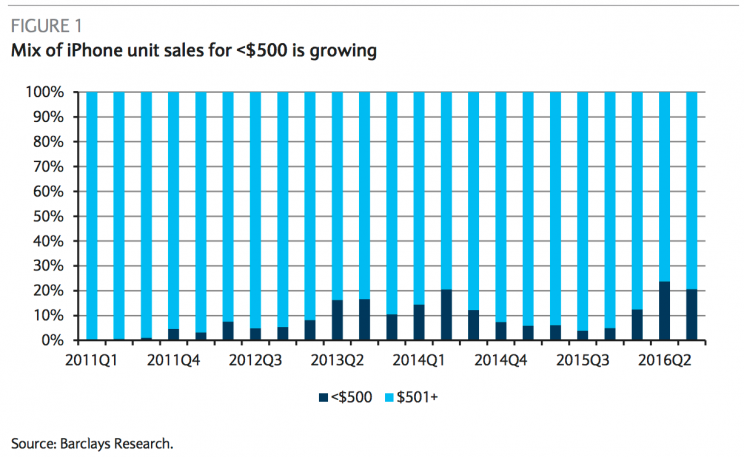 If people are choosing not to buy Apple’s newer products, this doesn’t signal good things for the next generation of iPhone’s prospects as the company may not choose to invest as much in its next product cycle.

According to Forbes, Apple shares are currently indicated to move $4.28 per share in either direction – so we could see the price go up from $121.63 or down.

After the last earnings announcement in October 2016, shares fell by three percent after a disappointing quarter in which Apple announced its first annual dip in sales.

5. Watch out for the other products

Eyes are always on the iPhone as Apple’s flagship product prime cash driver but it will be interesting to see the revenue pulled from other services like Apple Music and the App Store.

The company released a new MacBook Pro last year too, with a touch taskbar at the top of the device’s keyboard, and this will be the first chance to see how the new product is performing.

And, of course, don’t expect to see much about the Apple Watch as these potentially embarrassing numbers always been hid from investors.

Amelia is a reporter for Verdict, covering global news, economics and business. You can reach her at amelia.heathman@verdict.co.uk