Opinion is divided as to whether the metaverse will truly be the next big thing, but there’s one sector where virtual worlds are already huge: that’s gaming, though curiously this is a sector which hasn’t yet moved to the Cloud. Nothing underlines this metaverse reality more clearly than the $68.7 billion acquisition of gaming studio Activision Blizzard by Microsoft, one of the world’s big Cloud companies.

Microsoft chairman and CEO Satya Nadella summed up the deal saying “Gaming is the most dynamic and exciting category in entertainment across all platforms today and will play a key role in the development of metaverse platforms.”

Gaming is massive indeed, but from some tech business points of view it is not exactly metaverse: or not metaverse as major cloud firms would like it to be. In terms of computing activity, much metaverse-type gaming today takes place in a powerful PC or console operated by the gamer, rather than being streamed from a corporate cloud platform. Analysis firm GlobalData predicts cloud gaming will become a $3 billion industry in 2022, up 59% from 2021: cloud gaming is a niche market within the $221 billion video games industry.

In 2022, services with exclusive games and reasonable pricing will see faster adoption than others. Exclusive content will be critical for attracting customers: Cloud gaming service providers aim to boost the popularity of their platforms by offering a library of exclusive and trending games to attract and retain users.

Tech giants like Microsoft with cloud gaming services will become game publishers in their own right. This will trigger a wave of consolidation in the market, with independent games studios becoming popular acquisition targets as acquirers compete to add exclusive titles to their portfolios.

New white-label platforms will also intensify competition in 2022. Google has white-labelled it so-far-unsuccessful cloud gaming platform Stadia, meaning there will be new cloud gaming providers in the market in 2022.

AT&T has already adopted Stadia, and more, including start-ups, will follow suit. For example, Intel bolstered its cloud gaming capabilities by acquiring RemoteMyApp in November 2021. It will use RemoteMyApp’s streaming technology to offer customized cloud gaming solutions to businesses, challenging Google. Intel will also compete with Nvidia around data centers, chips, and cloud gaming services.

Apple is the only member of Big Tech without a cloud gaming service, much though its iOS devices look set to be very popular as portals to the metaverse. In addition, cloud gaming providers avoid Apple’s App Store due to its strict policies on revenue commission and app approval.

The likes of Nvidia, Microsoft, and Amazon will therefore increasingly opt for web-based routes to target millions of iOS users in 2022. By the end of 2022, any efforts Apple makes to launch a competitive service will be insufficient to take market control.

Big Tech is also increasingly investing in metaverses, virtual worlds of gameplay which can be accessed using AR and VR devices. The metaverse is attracting significant media attention, including predictions that it will form the next incarnation of the internet, though the metaverse may not be realized in its true form for several years. Sentiment surveys by GlobalData over the last year indicate that the metaverse dominated business attention in mid-2021, stealing the limelight from perennial attention-grabber Artificial Intelligence, but that the position had largely reversed itself to the status quo ante by the end of the year. 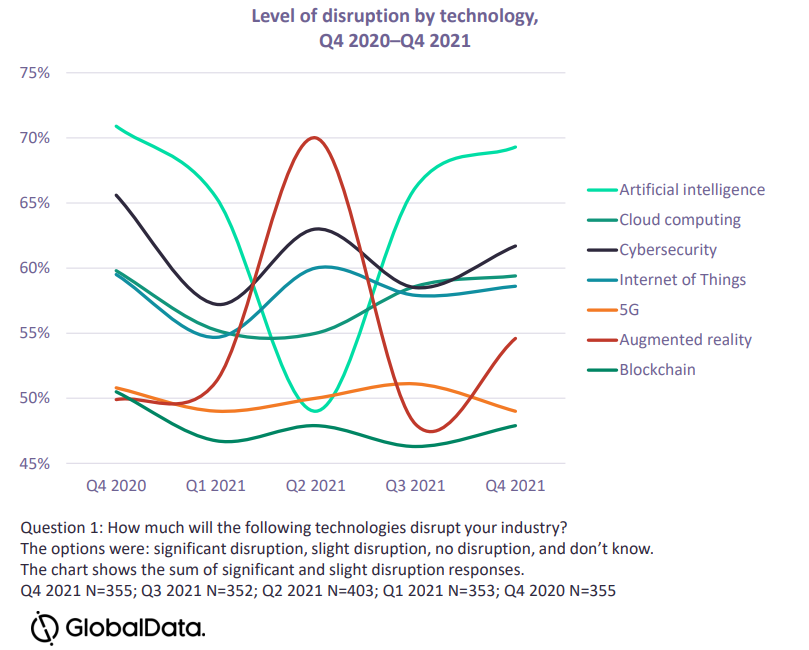 However, new metaverse prototypes and use cases will emerge in 2022. Competition will intensify as the tech titans battle for market dominance and non-tech brands explore how metaverses could deliver operational improvements.

In 2022, gaming companies will invest in the metaverse to expand their communities. Niantic and Epic Games will launch early versions of their metaverse platforms, while other large game publishers such as EA and Tencent will also join the race. Unity and Epic Games will compete to become the preferred engine provider for metaverse development.

The shift from often more costly traditional TV services to flexible streaming alternatives will continue, with internet TV subscribers set to exceed cable and satellite accounts by 2025. As broadcasters launch their own offerings, the number of streaming platforms will also increase by 25% by 2025.

The pandemic boosted large streaming companies: Netflix’s revenues grew by 24% in 2020, while Disney amassed 112 million users by July 2021, less than two years after its launch. However, the number of new subscribers will stagnate in 2022, posing a problem for latecomers launching their own services. How many subscriptions will the average user be willing to pay for in the medium term? Streaming giants will try to maintain market hegemony by splurging on content portfolios to differentiate in a crowded market.

Content will also be important for TV broadcasters as companies such as ITV invest heavily in programs aimed at young adults to stem the exodus of this demographic from their audience.

There will be a series of strategic partnerships between leading streaming platforms and gaming and podcast companies as streaming giants diversify their offerings to reach new audiences. Aside from its gaming service, Netflix has established a co-streaming partnership with game platform Twitch for select content.

Subscription video on demand (SVoD) companies will also continue their expansion into the live audio market following Amazon’s purchase of Wondery in 2020 and the launch of Spotify’s social audio app, Greenroom.

Streaming companies largely reliant on ad-based revenues will also diversify. The launch of YouTube Shorts is evidence of Alphabet capitalizing on the short video trend as streaming companies attempt to maintain their relevance in the age of TikTok.

Finally, streaming success may signal the end of net neutrality in 2022. Large streaming companies such as Netflix may become a victim of their own success regarding net neutrality. In October 2021, Netflix reported that over 100 million viewers across 83 countries had watched its series Squid Game. However, the success of the series has prompted South Korea’s SK Broadband to sue the company after network traffic increased by a factor of 24 in September 2021 (the month of Squid Game’s release).

If successful, the case will spell the end of an open internet, and SVoD consumers could face price rises of up to 10%. This regulation may become a powerful differentiator when consumers choose between subscription-based streaming platforms.