In an age where technology has infiltrated every aspect of our existence, getting sleeker and sleeker by the day, wheelchairs are stuck in the past.

According to the Wheelchair Foundation, around 131.8 million people around the world need to use wheelchairs. In the developed world around 9.5 million people are using wheelchairs at the moment. And yet, despite this figure (which is rising in most developed countries thanks to an increasingly ageing society) wheelchairs haven’t changed much.

For those people who use powered wheelchairs, there are essentially two options. There’s the classic model, which basically consists of a chair strapped to a motorised base. The other option is the frame chair with a small motor, which cannot travel fast nor far.

These traditional wheelchairs are often cumbersome, heavy, and difficult to maneuver.

However, change is coming. This week, Verdict had a chat with Satoshi Sugie, one of the three founders of Japanese start-up WHILL. Along with his colleagues, Junpei Naito and Muneaki Fukuoka, Sugie has created a new wheelchair fit for the modern age.

So what inspires three able-bodied men in their mid-thirties to try to revolutionise the humble wheelchair? Well, explains Sugie, the idea all came from a friend of theirs. Having recently begun needing to use a wheelchair, he felt embarrassed by the cumbersome devices available to him. His embarrassment was so acute he’d given up something as simple as going to his local shop to avoid being seen in public in the chair.

“The problem was twofold. The first was the mental barrier. He didn’t want to be seen to be using a wheelchair. Second is the physical limitation. The manoeuvrability of a conventional wheelchair was poor, making it difficult to clear bumps on the road to get to his destination. So there was a mental barrier and a physical limitation so that’s what we got from him,” says Sugie.

“At that time we had a small engineering team, it was all late twenties young designers and engineers who were keen to create a new product. We all started work on this product just for fun. After one year of development, in 2011 we exhibited the first product to the Tokyo Motor Show as a personal mobility device. We had an overwhelmingly positive reaction from all over the world.”

After sharing their first design, the WHILL Model A(M) at the Tokyo Motor Show, the team kept experimenting.

The outcome of the design team’s experiments was the WHILL Model C. A sleek, attractive wheelchair redesigned from the ground up. Of course, all the standard features are on board, including colour customisation, a nine-mile radius from the lithium-ion battery and a 4mph top speed.

Having had the opportunity to try out the chair, Verdict can confirm that it’s incredibly intuitive to control. Within minutes we were completing complex maneuvers with no help.

It’s also pretty nippy and can easily keep pace with even the fastest pedestrians (though may not manage to keep up with someone who is running).

On top of the traditional features, the WHILL Model C also offers a sleek, open design. The arm-rests and the controllers attached to them are a little higher than on traditional power wheelchairs. Sugie explains that this is to keep help the rider feel like they’re in control of a vehicle, not lounging in a chair:

“We wanted to build something that looks like a mobility device. We wanted it to make it iconic, so design is the focus, not the fact that it looks like a chair.

“The second thing is the position and posture of the rider. When you drive a car you have the steering wheel just below your eye-line, and with a bike the handlebars are even lower. Basically when you drive something you have a position like that. That makes you sit up and you’re in a position where you can see other people. And that makes you feel like you’re driving something and other people notice that you’re upright and driving.”

In addition, the whole chair is designed to easily dismantle into three small sections. The idea is that these sections can simply be stowed in the boot of a car, helping the wheelchair to fit into users’ daily lives with ease.

However, where the WHILL Model C gets really interesting is its use of new technology.

The most obvious of these is the newly designed and patented omni-wheel technology on the wheelchairs front wheels. Herein WHILL has literally reinvented the wheel. To put it simply, the omni-wheels look like tires with a deep tread. However, on closer inspection, they’re actually formed of a number of interlocking wheels which face sideways. Sugie explains:

“It looks weird right? It’s actually composed of 24 small wheels. It makes small movements in tiny spaces. It’s not going to fishtail, so it’s very, very steady. Because of this technology there’s a tiny radius for inside use. There’s also good ground cover for outside use.”

The 24 smaller wheels on the omni-wheels all turn independently, allowing the whole chair to make minute movements to the side. In addition, the gaps between the wheels work like the deep tread tires they resemble helping the chair to climb over rough terrain easily.

Even more interesting is the WHILL Model C’s accompanying app. This allows users to check the battery life, adjust speed, and lock the wheelchair when not in use. However, the most exciting thing is that users can control the whole chair remotely via the app:

Sugie explains that a feature available in Japan allows relatives to track the position of the chair to keep an eye on older users. If the chair hasn’t moved for hours or even days, that might prompt relatives to call for help. 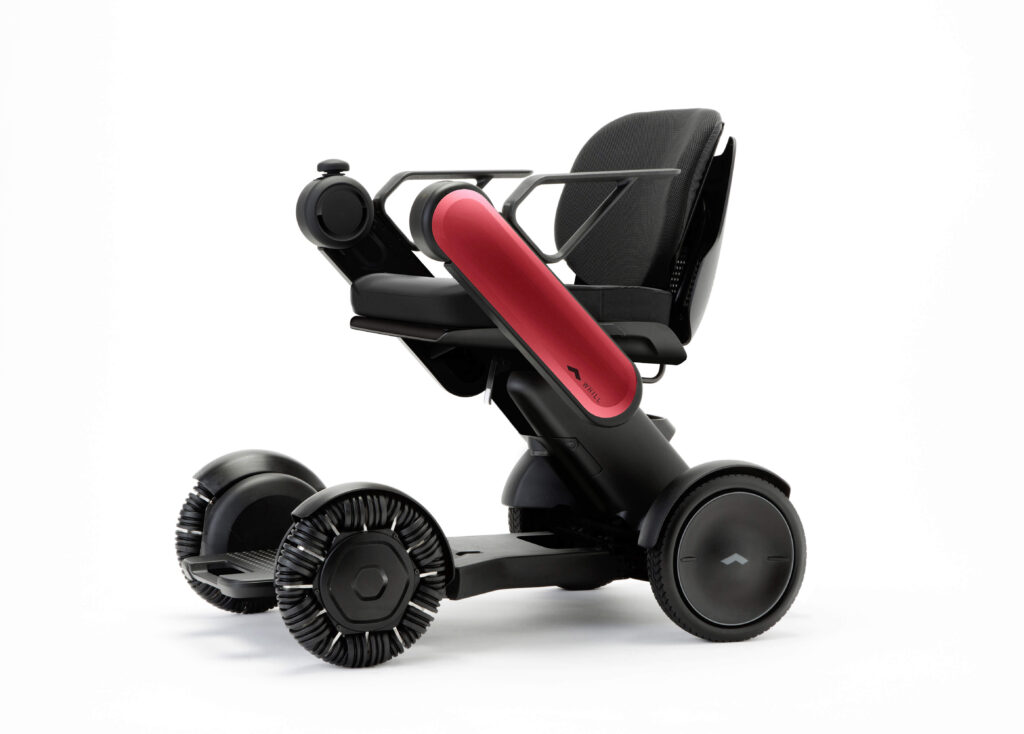 While the WHILL Model C is already proving a hit (WHILL hopes to sell 10,000 by the end of the year) that’s far from the be all and end all of the company’s plans.

Sugie explains to Verdict that the companies next project is what they’re calling ‘Mobility Infrastructure’:

“All we need is devices driving around and a management system, so we’re creating that now. The wheelchair will automatically come to you and take you to the destination.

“We’ve done pilot tests at Tokyo, Haneda, and Heathrow airports, and soon we’re going to be trialing in New York at LaGuardia.”

Airports make great sense as a place to trial the scheme. In the US alone, around 25 million people use wheelchairs at the airport every year, and that number is only increasing. Sugie hopes that WHILL’s plan could end up saving time and money for airports, and help make the journey more convenient for customers:

“The airport has to buy a wheelchair and they have to hire an employee to run the mobility assistance. The airport’s cost is increasing all the time. What we’re trying to do is automate everything, autonomous driving, autonomous delivery, and an autonomous management system. So this is the first test. We’re hoping to finish testing by 2020.”

Safe to say, we can probably expect to see a lot more WHILL devices out and about in the future.