We’re racing towards the football transfer deadline — and English Premier League teams have already spent more than any previous year.

Teams across the country will be rushing to close their final deals before 11pm London time on 31 August.

It is estimated that over $1.2bn has been spent by clubs attempting to attract the best talent to their squad. Romelu Lukaku’s move from Everton to Manchester United cost an initial $95m alone.

How do clubs manage to spend such huge amounts of money on their squads? Here are a few reasons why.

According to data from Sportcal, the media rights revenues for the Premier League are the highest in Europe, amounting to a total of $5bn in 2017.

Almost half of the total revenue of Europe’s big five leagues comes from broadcast deals, according to research by Deloitte. The professional services firm says the entire European football market was worth $31bn in 2015-16.

The UK is sprinting far ahead from its European counterparts. The second highest media rights revenue goes to Spain’s Liga, trailing behind revenues of $2.3bn in 2017.

By comparison, Germany’s Bundesliga only generated revenues of $1.2bn in 2017, less than a quarter of what the Premier League brings in.

This is surprising because the combined revenues of the 18 clubs in the Bundesliga is around $3.2bn, making it the second-richest league in Europe after the UK.

2. This is only set to increase thanks to Chinese sponsorship

Chinese firms have been making major moves into the sports advertising market. The smartphone maker Vivo recently became a second-tier ‘World Cup Sponsor’ in a deal covering the next two World Cup events in Russia and Qatar.

This deal is reported to be worth $456m over six years.

Vivo isn’t the only one. Last year the Chinese property and entertainment conglomerate Wanda Group became a top-tier ‘Fifa Partner’ in a deal covering the next four world cups.

In addition, the leading consumer electronics company, Hisense, became a second-level sponsor for the 2018 World Cup. Previously, Hisense had become the first Chinese sponsor of the European Championships, when it sponsored the 2016 edition in France.

Mark Gao, chief executive of Momentum Sports, the Chinese agency that represents Vivo, says this is all down to Chinese president Xi Jinping’s influence.

It started first of all when president Xi Jinping came into position, as he is an avid football fan. The central government has done a lot to support football as a whole. You’ve seen a lot of investment in football, basketball and other sports.

It seems likely that we will see more and more Chinese firms bringing sponsorship into European football leagues.

German-based brand Puma is the top kit supplier in the Premier League, according to Sportcal. The brand has deals with 25 percent of UK teams and its deal with Arsenal, running until 2019, is worth $38m a year.

This is another way English Premier League teams generate incomes.

However, Adidas’ 10-year deal with Manchester United, signed back in 2015, remains the largest in the Premier League. This is valued at $96m a year.

Manchester United also generates the most income from shirt sponsorship. The US automotive manufacturer Chevrolet pays $65m a year to be on the front of the famous club’s shirts.

Yet, automotive brands only make up 10 percent of shirt sponsorship deals. Sportcal’s data shows that gambling and gaming brands make up 45 percent of front-of-shirt deals in football, the largest amount of deals.

This is another instance where the influence is coming from China too. According to Sportcal:

Gambling brands from the Far East and those that are marketed as Asian brands are snapping up deals with Premier League teams that are expected to finish in the lower half of the league. 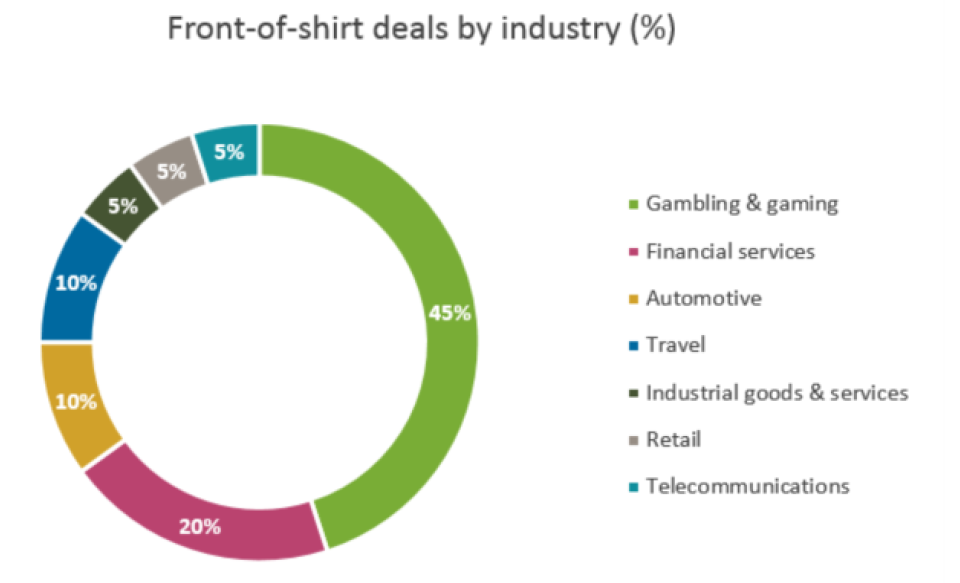 Gambling and gaming brands make up the biggest proportion of deals

A total league figure of just over $368m has been invested by brands for the 2017-18 season in terms of front-of-shirt sponsorship.

Whilst TV revenue has increased, Sportcal notes, it is the front-of-shirt landscape within the Premier League that remains the strongest in world football in terms of value.

This is in no small part attributable to the ‘big six’ in the league which command some of the highest fees in football.

As well, the Premier League remains in front when it comes to front-of-shirt deals. The average deal in the UK is around $18.91m, whilst in Germany, it is $12.2m. This is a smaller gap of only $6.71m.

In this instance, the Bundesliga is boosted by a strong ‘middle order’ of clubs and a more even distribution of wealth among teams.