The UK’s vote last June to quit the European Union is set to be a key theme at this year’s World Economic Forum (WEF) in Davos, Switzerland next week.

Ahead of the annual meeting of global political and business leaders, the WEF has published its Global Risks Report 2017 that has highlighted rising populism and societal polarisation in Europe and the US as a top trend for 2017.

The report found “the unexpected triumphs in 2016 for the Brexit campaign in the UK and president-elect Donald Trump’s campaign in the US are the most high profile indicators of a febrile political environment”.

With continued uncertainty surrounding Brexit negotiations, and criticism of her strategy ahead of the formal triggering of Article 50 in March, May’s attendance at the summit is likely to be closely scrutinised.

The Brexit vote has been widely perceived as representing a backlash to the global uncontrolled movement of labour, especially across the European Union.

According to the report mass migration of labour “poses challenges for social protection”.

Despite migration being generally accepted as a net economic positive by economists — the OECD estimated that immigration in 17 OECD countries from 2007 to 2009 added 0.35 percent to GDP on average (0.46 percent in the UK.

However, large and sudden inflows of people can put additional and unpredictable strain on social systems and resources. In Europe, for example, the influx of over 1m migrants in 2015 was more than four times the number in 2014.

The WEF report warned that some countries “may choose to loosen their international economic ties in order to slow the pace of immigration” — suggesting the UK could opt for a so-called hard Brexit, meaning it will leave the European Union Single Market along with the EU’s free movement of people. 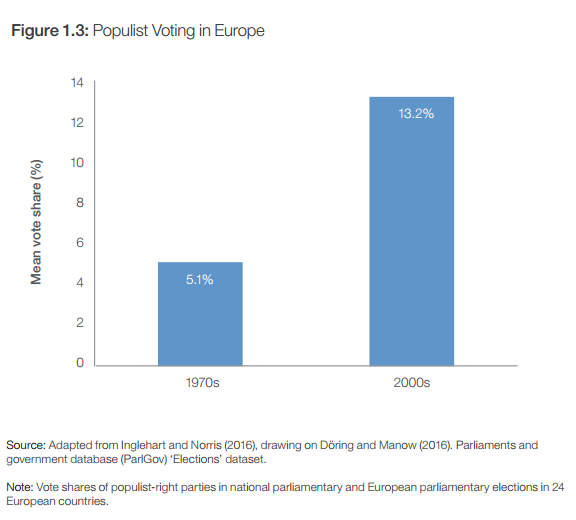 In its report the WEF asked whether western democracy is in crisis, saying politicians are “struggling to respond to rapid changes in the political landscape as voters’ disaffection expresses itself in lower turnouts or rising support for previously peripheral movements”.

“Although 2016 will be remembered for dramatic political results that broke with consensus expectations, warning signs that a persistent cluster of societal and economic risks could spill over into real-world disruption.”

Climate change is one of the biggest risks identified by the report. It’s the first time all five environmental risks — which include extreme weather events, failure of climate change mitigation and adaptation, and water crises — feature for the first time among the most likely and most serious risks.

The British PM will be joined by other prominent leaders, including the Chinese president, Xi Jinping, the first figurehead in the country’s history to attend the summit. However, some big names will be noticeably absent. German chancellor Angela Merkel will skip the meeting for the second year in a row.

The WEF elite annual gathering, now in its 47th year, brings together politicians, corporate executives, public intellectuals and even some celebrities. Discussions focus on the most pressing social, political and economic issues facing countries around the world.

NOW WATCH: What you need to know about Davos 2017