SoftBank Group has doubled its investment in Exeger, a Swedish company making what it describes as the “world’s best solar cell”, in order to help bring the technology to market.

Exeger is developing flexible solar cells that are small and efficient enough to be affixed to and power gadgets such as wireless headphones and tablet computers using ambient light.

The company also plans for its cells to be installed on cars, walls, blinds, furniture and rooftops, which if it can achieve, would prove revolutionary to both the power industry and global environmental efforts.

SoftBank’s investment, which was announced today, sees the Japanese technology giant invest $10m in Exeger, following a previous $10m investment in March of this year.

This will enable Exeger to bring its technology to market, with its first products set for shipment in 2020, in what may prove to be a radical offering within the consumer technology space.

The company also has secured a strategic partnership with SoftBank subsidiary SB Energy Corp, which is designed to accelerate the rollout of Exeger’s technology globally.

“We are confident that Exeger’s carbon positive materials will dramatically transform people’s lifestyles and behaviour.” 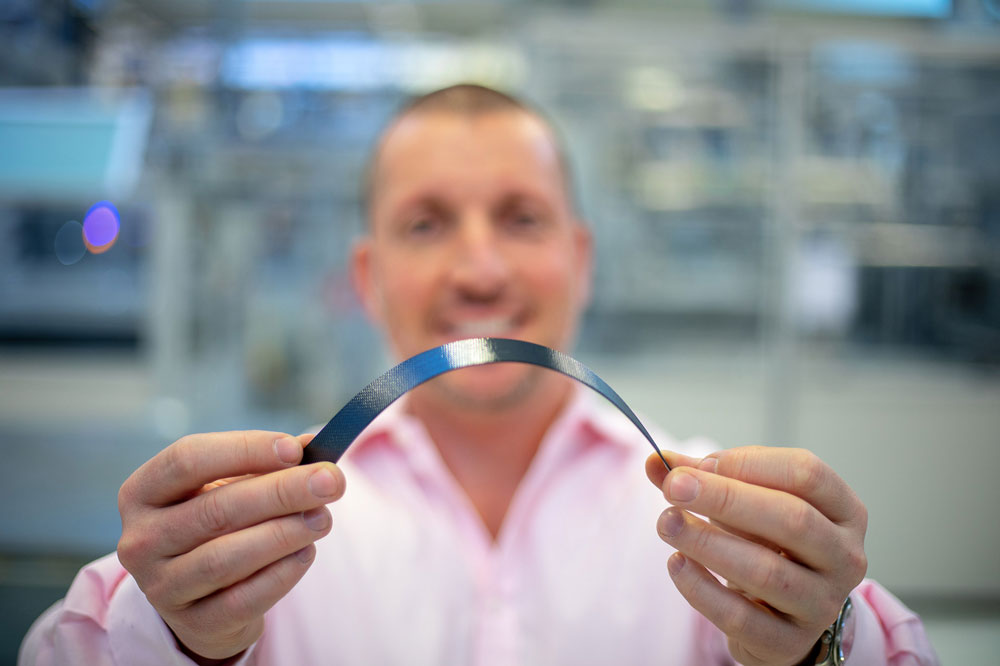 Giovanni Fili, founder and CEO of Exeger, with the a solar cell headband for wireless headphones.

SoftBank has a strong track record of backing innovative technology companies, making its investment a strong vote of confidence in Exeger’s potential to realise its bold claims about producing the “world’s best solar cell”.

“We are very excited about our collaboration with Exeger, which has this incredible technology, aimed at promoting the fusion of energy and information technology to help realise a more convenient and comfortable society,” added Miwa.

Exeger has already signed its first contract and secured $25m additional funding from Swedish pension company AMF, which, along with its SoftBank partnership, will put it in a strong position to begin its commercial rollout.

“We want to always be relevant for consumers and lead the world into a new age of sustainable innovation through adoption of our carbon positive material,” said Giovanni Fili, founder and CEO of Exeger.

“A strong relationship with the SoftBank Group will be a key factor in successful deployment into new markets.”

The company operates what it describes as “the world’s largest factory for printing solar cells”, a 300,000m2 facility in Stockholm, Sweden.

This is currently capable of screen-printing solar cells for 40 million headphone bands a year, with further factories planned in the future.

Read more: Off-grid solar is Africa’s best hope for prosperity – but business must take the lead