In February 2019, Telkom Kenya and Airtel Kenya announced plans to merge their Kenya telecom services into a joint venture to be called Airtel-Telkom.

The motivation behind the deal is to create an entity to challenge the market dominance of Safaricom. Since 2015, Telkom Kenya and Airtel Kenya have gained marginal market share growth. 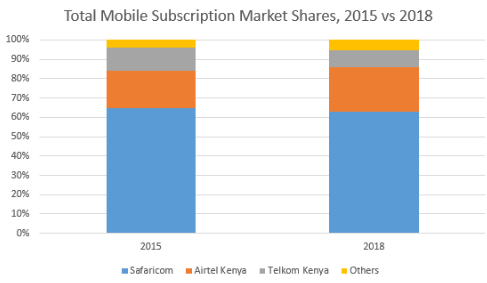 The merger is widely seen as bringing competitiveness as the joint firms could potentially improve their scale and efficiency, improve brand awareness and provide a greater number of products and services to its customers.

However, on 28 August the plan was suspended by the Communications Authority of Kenya (CA) following intervention from the Ethics and Anti-Corruption Commission (EACC).

Mugo Kibati, the CEO of Telkom Kenya, was reported in a Reuters story saying the company would cooperate with the investigation and said the probe was not linked to the merger deal.

Despite this delay, Telkom Kenya said it is optimistic the transaction will get the go-ahead by the EACC and the merger could occur before year-end 2019.

The merger, if approved, could reshape the Kenyan telecoms industry and bring competition to the sector thereby challenging Safaricom’s telecom dominance.