The US has topped a list of the world’s most internet addicted countries, according to price comparison website Compare the Market.

The company analysed the total number of free Wi-Fi spots, the number of mobile subscriptions per person and the percentage of the population who use the internet.

With this data, it worked out a ranking for the most internet-addicted countries worldwide.

The study revealed that the average American spends 24 hours a week online.

Mobile subscriptions are at 1.23 per person across the whole of the US and 76% of the population are regular users of the internet.

Compare the Market said: “In the era of fake news, Snapchat and #selfie, it seems we are never too far away from our phones or without access to the internet.”

Top 15 most internet addicted countries: (Ranked by the three factors)

Brazil took second place after the States in the list of top countries needing a digital detox.

The South American country with a population of 210m, according to Worldometer, provides the highest number of free Wi-Fi locations at over half a million (559,490) – 40,000 more than the US. 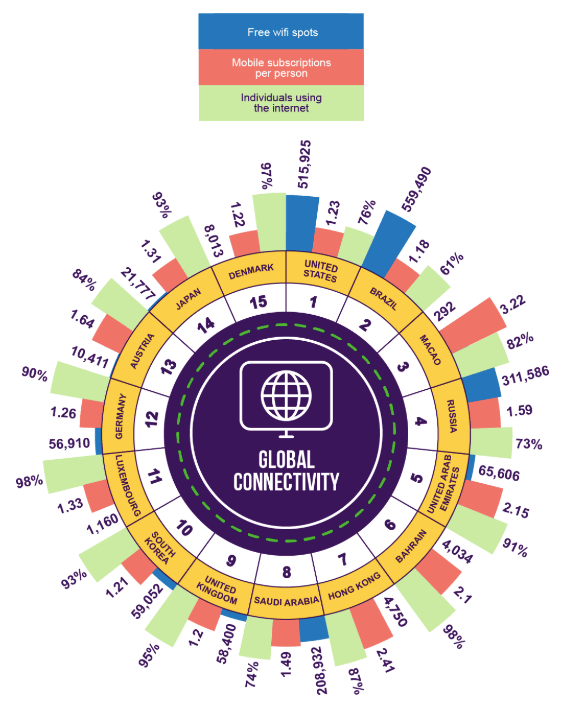 The average person in Macao has over 3 mobile subscriptions

The average person in the autonomous Chinese region has 3.22 mobile phone subscriptions, but Macao only has 292 free Wi-Fi spots.

Bahrain is at sixth place and Luxembourg at 11th, both have 98% of their populations regularly connected to the worldwide web.

After Bahrain and Luxembourg are a mix of Middle Eastern, Asian and European cities, with Denmark at 97% of the population regularly connecting to the internet, the UK at 95%, Japan and South Korea at 93% and UAE at 91%.

In terms of mobile subscriptions, the results suggest that some populations have two or three mobile phones in their pocket.