Human beings are clearly not fit-for-purpose when it comes to driving cars, buses and lorries – they tend to be too emotional, too erratic and too prone to suffer from fatigue and stress.

The cost of this incapacity is enormous: around 1.5 million deaths on the world’s roads every year and at least 50 million fatal or serious injuries.

The US Government calculates that road accidents cost $250 billion a year in property damage, emergency services, lost work and congestion. This equates to 40% of what the US auto industry turns over annually.

For most people, a car is not a lethal weapon, but a privately owned mechanical machine powered by an internal combustion engine (ICE) running on fossil fuel. It is also something by which many people define themselves and get a sense of otherwise unavailable power and freedom.

But for the futurists of Silicon Valley and their peers across the world, a car is a networked supercomputer that is being transformed by 3D vision systems, AI, wireless communications and smartphone apps into a ride-sharing, sentient robot powered by batteries or hydrogen fuel cells that is free of dangerous human control and will transform the speed, cost, safety and cleanliness with which people and things can be transported.

For executives at the world’s legacy car makers, the vehicle symbolises the mounting challenge of preserving the status quo as nearly as possible for as long as possible, while adapting to the categorically different vehicle future that is streaming towards them, not initially of their choosing: the omega point of “electric, shared and autonomous”.

Outside China, many car makers are on the back foot in a slow-growing, low-margin, over-supplied business in which non-auto companies are the playmakers – Google, Uber, Tesla, Baidu, Tencent, Alibaba and Didi Chuxing.

Indeed, a host of players across the increasingly fungible automotive industry value chain – from car makers to Tier-1 auto parts suppliers, semiconductor firms, internet companies and transport-as-a-service businesses – are confronting or accelerating unfolding trends and creating strategic inflection points on the back of advances in autonomous technology.

Each threat is potentially existential to the legacy carmakers who operate in a low growth, low margin sector that rattles with overcapacity, and which is seeing its supply lines reset by cumulative advances in enabling

Our key conclusions are as follows:

Brains: Over 30 companies are currently developing the “brains” for self-drive cars using sensor-fed machine learning algorithms. The acknowledged leader is Google’s Waymo. But Tesla’s AutoPilot claims parity with Waymo while Uber, Baidu, Aptiv/NuTonomy, Nvidia DRIVE, Intel/Mobileye and GM Cruise are all in serious contention. A clutch of AI start-ups is developing avant-garde technology, including the US’s Aurora and China’s Horizon Robotics.

Sensors: Sensors provide the key data inputs to the car’s “brains”. They range from heat and motion sensors to 3D cameras and from LiDARs and ultrasound radars to vertical cavity lasers. The dominant players are Sony, Samsung, NXP, Infineon, STMicro, Velodyne, Lumentum and Finisar with Texas Instruments, Cypress and Xilinx as major contributors. On the LiDAR side, leading player Velodyne is facing rising competition from Quanergy and Lumentar.

Auto-grade silicon: All the various components and activities have to be constantly checked, processed and assessed by multi-core supercomputing processors and networks of microcontrollers. Nvidia and Intel, with AMD as a second source, are the clear leaders in the former, while NXP, STMicro and Infineon dominate the microcontroller space and currently have the advantage of being long-standing, tried and tested suppliers of ‘auto grade’ components to the car makers and their Tier-1 sub-system suppliers.

Tier-1 auto suppliers: The big auto parts suppliers own much of the intellectual property in key semi-autonomous driving technology, electronic and safety systems. The leaders are Bosch, Continental AG and Aptiv Denso, Autoliv and Magna are in strong contention.

GlobalData has developed a unique thematic methodology for ranking technology, media and telecom companies based on their relative strength in the big investment themes that are impacting their industry.

Our “thematic engine” identifies which companies are best-placed to succeed in a future filled with multiple disruptive threats. To do this, we track the performance of the top 600 technology, media and telecom stocks against the 50 most important themes driving their earnings, generating 30,000 thematic scores. The algorithms in GlobalData’s “thematic engine” help to clearly identify the longer-term winners and losers within the TMT sector

We ranked 42 companies involved in the automotive industry on the basis of overall technology and leadership in the ten technology areas that matter most to this sector. 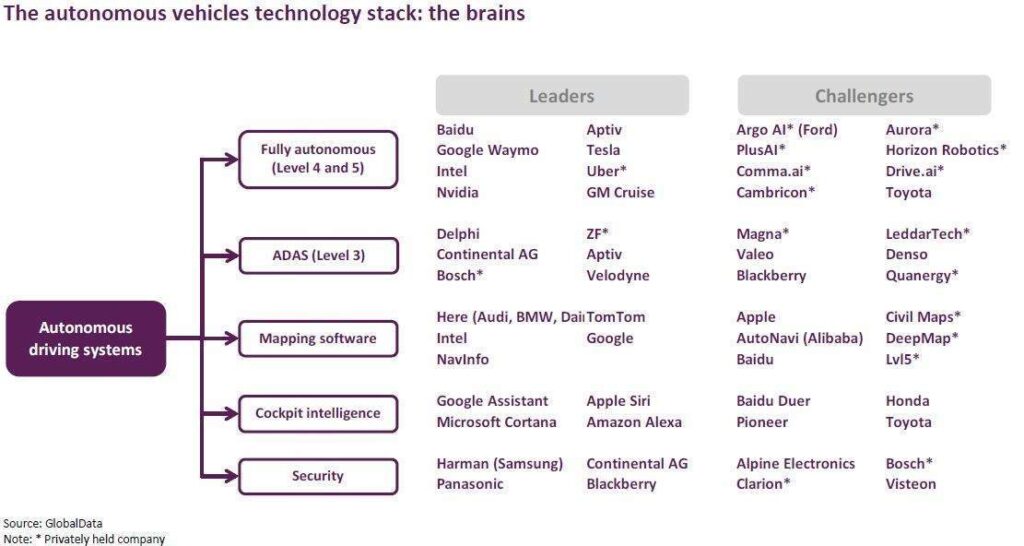 Here are the top ten automotive companies as ranked by GlobalData in terms of technology areas which matter most in this sector, generating a leading indicator of future earnings growth – with market cap.