In mobile broadband networks, there are few performance drivers as important as bandwidth: having a broad swath of spectrum available is a crucial driver of network performance and customer satisfaction. However, both cellular and Wi-Fi networks face a common foe – finite bandwidth.

Cellular operators have typically utilized licensed spectrum in a number of important bands, including 700 MHz, 2.6 GHz, and 3.5 GHz. Similarly, Wi-Fi has relied almost exclusively on two bands – 2.5 GHz and 5 GHz. However, many of those bands are already being pushed to their limits, both cellular and Wi-Fi advocates are now bracing for a fight over the 6 GHz band, which offers 1.2 GHz of precious new, albeit invisible, real estate on which to expand.

In April, the Wi-Fi Alliance, which promotes global Wi-Fi adoption on behalf of technology vendors, reported significant progress with Wi-Fi 6E, the latest version of the technology that began rolling out at the beginning of 2021 and utilizes the 6 GHz band.

According to the Wi-Fi Alliance, Wi-Fi is winning the regulatory battle over who controls the 6 GHz band in a number of key markets. For example, in March, Saudi Arabia’s spectrum regulator announced it would make the entire 6 GHz band available for Wi-Fi 6E deployments, following Brazilian regulator Anatel, which made a similar announcement in February.

Chile, South Korea, and the US have already opened up the entire band 6 GHz band for Wi-Fi. However, the Wi-Fi Alliance is now ratcheting up the pressure on other countries to follow suit. According to the Wi-Fi Alliance, Canada, Costa Rica, Japan, Jordan, Qatar, and Taiwan are likely to move in this direction as well. 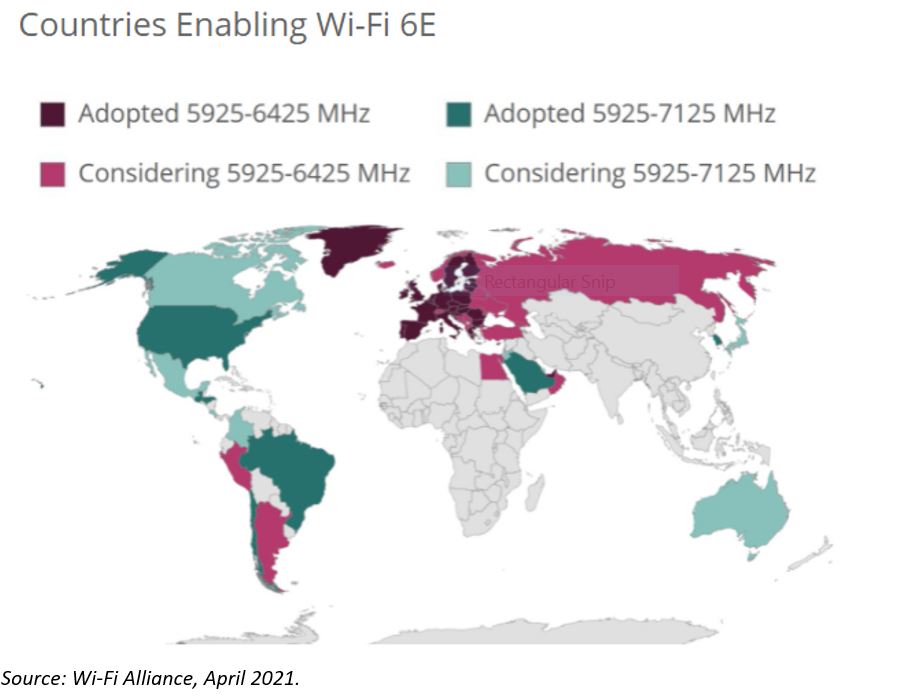 However, that still leaves many countries that have either dedicated only the lower half of the 6 GHz band to Wi-Fi 6E – including the EU – or have not made up their minds at all yet.

In particular, China appears very much on the fence with regard to 6 GHz spectrum. And China’s largest telecommunications vendor, Huawei, argued in favor of cellular operator customers at its annual analyst event held in April. Huawei argues that the ~200 MHz of total spectrum held by many operators today is insufficient to meet demands coming from ongoing 5G technology deployments.

Huawei recently began testing a prototype 6 GHz cellular base station with plans for field tests in China and Russia this year and pre-commercial equipment in 2025 (though it is worth noting that this timeframe would leave Huawei approximately four years behind Wi-Fi 6E equipment which is already available).

Huawei is also hoping to use the 6 GHz issue to win favor from cellular operators in the Middle East and Africa that remain on the fence with regard to 6 GHz spectrum allocations. Considering that Huawei finds itself increasingly excluded from engagements in other markets, the company is hoping that advocating now for cellular operators in these “6 GHz undecided” regions might convince regulators to ensure these operators have sufficient spectrum to innovate in 5G. This in turn would presumably lead to massive 6 GHz cellular deployments by Huawei in a few years.

But that is by no means a guarantee, and the Wi-Fi Alliance is clearly hoping that its current Wi-Fi 6E momentum will soon sway regulators in the undecided regions as well.