Larger and more-cost effective wind turbines have been key drivers in the uptake of wind energy, according to a new report.

Bigger wind turbines can generate more power. As they have become cheaper to build, this increased power — along with other advances over the past 40 years, such as predicting wind conditions — has helped the renewable technology make up a greater percentage of the energy market.

“The size of a state-of-the-art turbine is extremely impressive,” said Berthold Hahn, one of the authors of the paper.

“The swept area of the rotor of a standard turbine is now twice the size of a football field. In parallel to the development in size, the technology has also become mature, meaning cost-effective and reliable.”

Turbine capacity is expected to continue increasing, reaching up to 10 to 15 megawatts. This could see turbine diameter reach as much as 200m long.

The SeaTitan 10MW wind turbine currently has a 190m rotor diameter, while the world’s tallest wind turbine overall is the Nordex 3.3 MW, with a total height of 230m.

General Electric’s renewables division is currently building the world’s biggest and most powerful wind turbine, with a capacity of 12 megawatts – enough to power up to 16,000 households.

However, larger turbines tend to be built offshore and are only viable in areas where winds are strong and consistent. Smaller, distributed wind turbines – such as those made by Halo Energy – have proven a promising alternative. 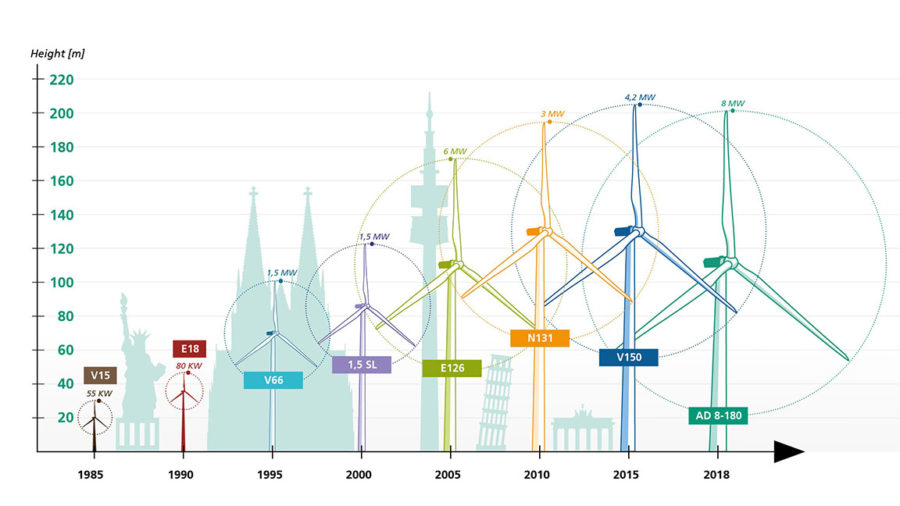 The growth in wind energy solutions, with larger, more efficient wind turbines over the decades.

As wind turbines have become more widespread and the technology has improved, economies of scale has made wind turbines cheaper to build and install.

Since the 1970s, the cost to produce electricity from wind has fallen from $500 per megawatt-hour to $50, the report states.

“The technical developments, like floating offshore turbines enabling the harvest of wind energy in very deep waters, integrated control strategies considering the needs of the grid, and artificial intelligence permanently assessing the performance of the turbines, have contributed to the impressive cost reductions,” said Hahn.

The report identifies finding more economical ways to maintain turbines as a key way for the industry to further reduce costs. And with improvements in power storage, Hahn sees wind technology playing a bigger role in supplying electricity to power grids.

“In many countries, wind energy has started to take over tasks of stabilising the grid from large conventional plants, meaning that the energy systems are now eventually changing from a mainly centralized structure to a decentralized one,” said Hahn.