Earlier this month, presidential candidate Elizabeth Warren unveiled her intentions regarding breaking up big tech companies to “restore the balance of power in our democracy, to promote competition, and to ensure that the next generation of technology innovation is as vibrant as the last.” if elected in the 2020 presidential election.

She raised concerns over the lack of competition in the tech industry, and the influence Big Tech has on political discourse, with more than 70% of all internet traffic going through sites owned or operated by Google or Facebook.

If her plans came into effect, tech companies with global revenue larger than $25bn would be split into smaller companies under antitrust laws, and mergers would be more closely regulated to avoid anti-competitive practices.

According to Buzzfeed News, this is the most far-reaching detailed proposal of any 2020 candidate so far to tackle the growing influence of the largest tech companies.

Reactions have been mixed, with Big Tech speaking out against Warren’s plans. Instagram co-founders Kevin Systrom and Mike Krieger spoke about the issue at South by Southwest, with Systrom saying that “a proposal to break up all tech is playing on everyone’s current feeling of anti-tech rather than doing what politicians should do, which is address real problems and give real solutions.”

The Information Technology & Innovation Foundation also criticised the plans, saying that “breaking up large Internet companies just because they are large won’t help consumers. It will hurt them by reducing convenience, reducing quality of service and innovation, and in some cases leading to the introduction of priced services.”

However, the Open Markets Institute has said that the proposal is “of fundamental importance to all Americans.”

The industry’s response to breaking up Big Tech

According to anonymous chat app Blind, the proposals have had support from the technology industry itself.

Blind, which carries out polls to show the opinions of employees, put the issue to tech workers, asking them to respond to the question “Should Amazon, Facebook and Google be broken up?”

A total of 6,082 answered the survey question regarding breaking up Big Tech and although 63.94% of respondents answered no, a significant number of people, 36.06%, answered yes. 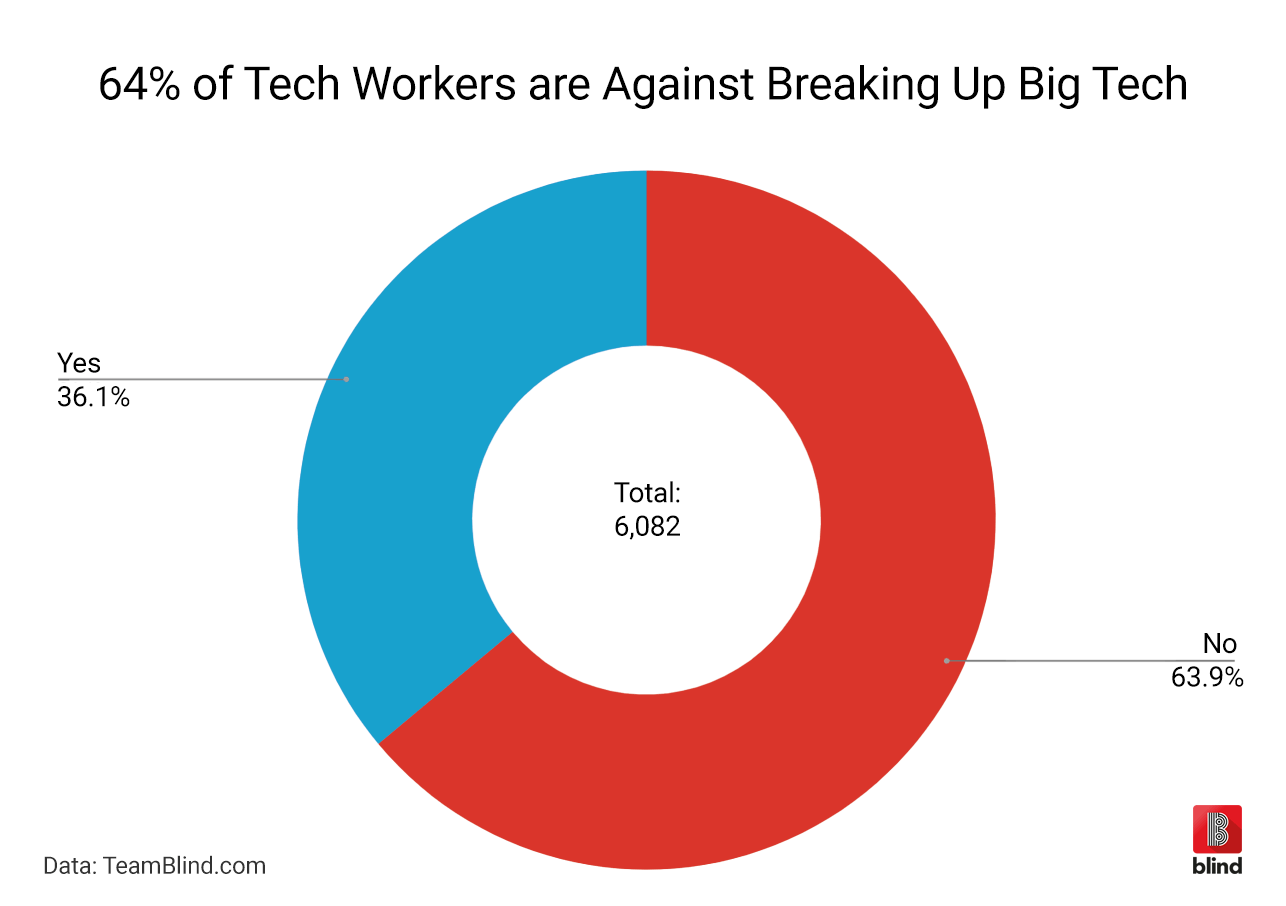 Unsurprisingly, the companies named in the question finished with the lowest percentage of employees answering with yes. Only 17.55% of Google employees were in favour, followed by Facebook with 17.59%, and Amazon with 22.89%.

The three companies with the highest percentage of employees answering yes were Lyft with 45.68%, Salesforce with 46.34%, and eBay with 47.44%.

This suggests that many within the industry are in favour of greater regulation to ensure that big tech is not allowed to further increase its influence at the expense of competition.

In recent months, there has been calls for governments to take action to rein in Big Tech, with The House of Lords Communications Committee publishing a report proposing  a new Digital Authority to oversee this regulation and UK Government’s Digital, Culture, Media and Sports Committee published its report on fake news and misinformation, calling for an online a code of conduct.

It remains to be seen whether the US will follow suit, and if Warren’s proposal will come to fruition, but if tighter regulation is introduced, the industry may be more in favour of breaking up Big Tech than it may appear. 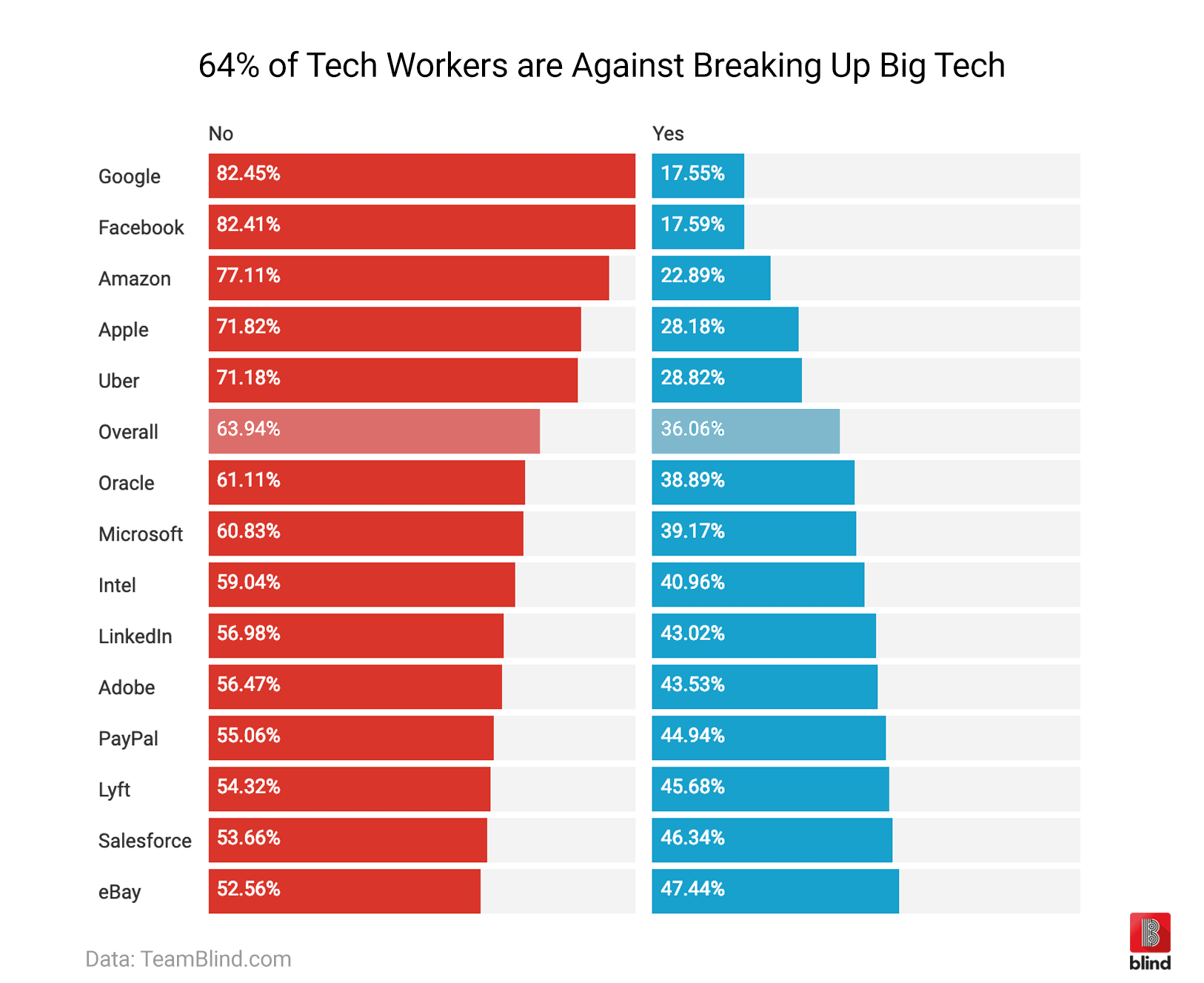