In 221 days Britain will leave the European Union. Over the next few months, the UK government must finalise negotiations ahead of the Brexit deadline on 29 March 2019.

At one point, a soft Brexit – which involves a UK-EU free trade area – seemed more likely. However, negotiations have since stagnated, leading International Trade Secretary Liam Fox to say that no deal is now the most likely outcome.

What an exit deal will look like is currently uncertain. But what we do know is the process that Prime Minister Theresa May must go through. First, May must conclude the withdrawal agreement with the remaining 27 EU member states in the form of a deal or no deal.

Then, parliament can either accept or reject the deal, with the opportunity to request that the government goes back to the negotiating table if they believe a better deal can be reached. Any deal must also be approved by the European Parliament.

All of this assumes that the UK does not ask for an extension of the Brexit deadline, which would require unanimous agreement from the European Council.

According to a report by the Institute for Government, a think tank, these are the five possible scenarios. 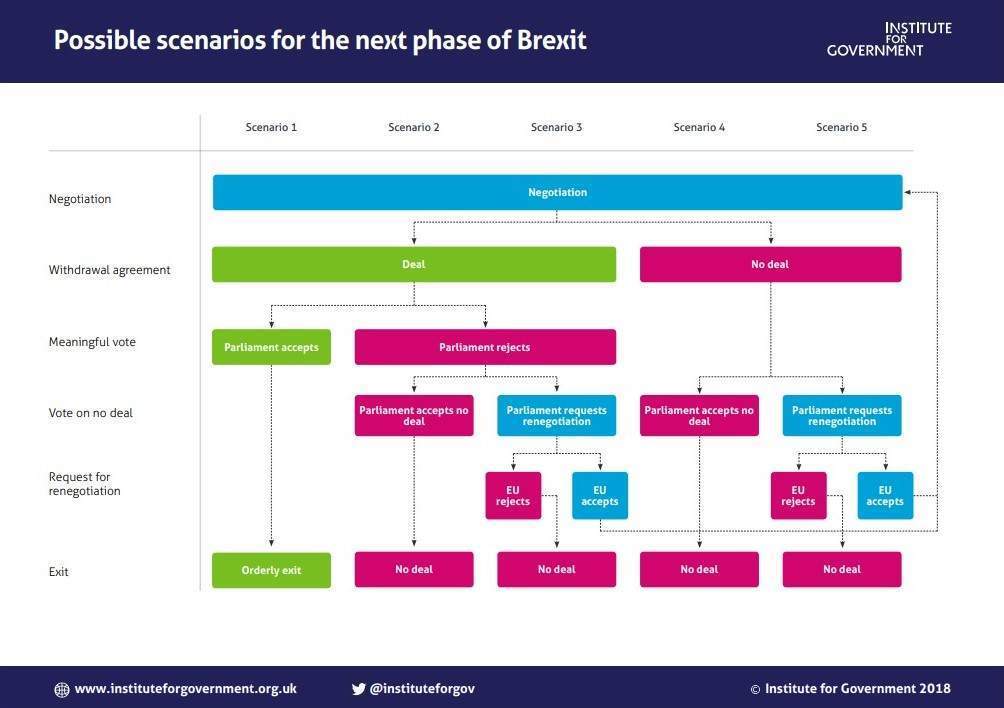 This is the smoothest option. The Prime Minister and the EU27 agree on a withdrawal agreement at a European Council meeting, which could be as soon as October.

That deal is then accepted by parliament and the UK leaves the EU on 29 March.

With the framework of a deal in place, the UK and EU will spend 21 months in a transition phase working on the finer details of their post-Brexit relationship.

In this scenario, parliament decides to reject the deal and doesn’t ask the Prime Minister to go back and renegotiate.

As per the EU Withdrawal Act, the government has 21 days to make a statement on how it intends to proceed.

The Prime Minister has the opportunity to persuade parliament to change its mind during this period.

If parliament is set on a no-deal Brexit, the government must make a statement within five days to parliament.

This scenario sees parliament rejecting the deal and sending the government back to Brussels to renegotiate.

If parliament takes issue with a central aspect of the withdrawal agreement, such as the Northern Irish border, then the Prime Minister may struggle to come back with a better deal.

If the problem revolves around minor areas of contention, the Prime Minister could have more room to manoeuvre.

The biggest problem with this scenario is time. If the final deal has been agreed close to the Brexit deadline, there will not be much scope to renegotiate and get the deal back to parliament for approval.

All of this would also depend on the EU’s willingness to renegotiate. If the UK runs of time it will result in a no-deal Brexit.

Scenario 4: No deal and parliament accepts

If the Prime Minister and the 27 EU member states cannot reach an agreement and parliament agrees, the UK will leave the EU without a deal.

The government must then make a statement on its planned way forward alongside a motion presented in neutral language.

Theresa May has previously insisted that “no deal is better than a bad deal”.

Scenario 5: No deal and parliament asks government to renegotiate

Here, the government fails to reach a deal and parliament sends the Prime Minister back to renegotiate.

However, it is unclear exactly how this would play out. While parliament secured a vote on a final deal, there is no parallel commitment in the event of a no deal.

The Withdrawal Act stipulates the government needs to lay a motion in January 2019 if there is no deal.

Because it is likely the motion will again be in neutral terms, the Speaker of the House of Commons would try to find another way to allow parliament to express its opinion.

As with scenario 3, the government will be hindered by time as the 29 March Brexit deadline looms.

Read more: Brexit stockpiling: The supplies you need to survive a no-deal Brexit