The UK government must “get real” about the country’s ensuing food crisis after Brexit, according to an 88-page report published on Monday by three academics.

Failure to act could result in dwindling food supplies and higher prices for the consumer.

We already have a crisis of food security in Britain, with eight percent of households not sure they will be able to buy enough food.

Food prices are likely to surge dramatically when tariffs, estimated to be as high as 22 percent by the British Retail Consortium, come into force once the UK leaves the EU.

Alongside the falling pound and rising inflation, food prices are also on the up.

The price of everyday goods at UK supermarkets rose 2.3 percent in the three months to 26 March compared to last year, adding £21.31 to the average household shopping bill.

“We are surprised at the failure of the government to address a huge set of issues related to food and agriculture,” said Erik Millstone, professor of science policy at Sussex University and one of the report’s authors. “They give the impression of sort of sleepwalking into this.”

Food prices are likely to surge dramatically when tariffs, estimated to be as high as 22 percent by the British Retail Consortium, come into force once the UK leaves the EU. We already have a crisis of food security in Britain, with eight percent of households not sure they will be able to buy enough food for their basic needs and more than one million annual visits to food banks. Brexit risks magnifying this crisis and adding grave concerns about food safety and environmental damage.

Timothy Lang, professor of food policy at City University London’s Centre for Food Policy and one of the authors of the report told Verdict:

The UK — the fifth richest country in the world — could dislocate its entire food system, which has built up over 50 years and change it all in 20 months time. A right-wing cult in the Tory party has taken over the Brexit framework. Food is a basic human need. There are major issues about food after Brexit and all we have had from the government is a promise of a new agriculture bill and a fisheries bill.

After five decades of reasonably stable supply and prices, the UK could face disruption in the food and drink sector that is “unprecedented for an advanced economy outside of wartime,” the report warned. 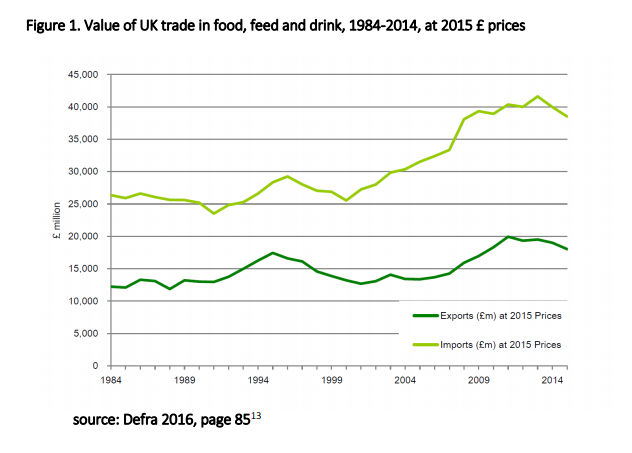 What’s more, it’s the country’s least well off that are expected to be hit the worst. The poorest 20 percent of UK consumers spend almost 16 percent of their domestic income on food.

Commenting on the report’s findings, Anna Taylor OBE, the executive director at the Food Foundation recognised the plight of the needy.

“The UK food system, consumer tastes and prices have been thoroughly Europeanised,” the report said. “This will be impossible to cut out or back by March 2019 without enormous consequences. The UK food system faces real challenges on food security.”

Indeed, the UK depends on the EU for a third of its food supply. The graph below shows just how reliant the UK food and drink industry is on nearby countries within the continent. 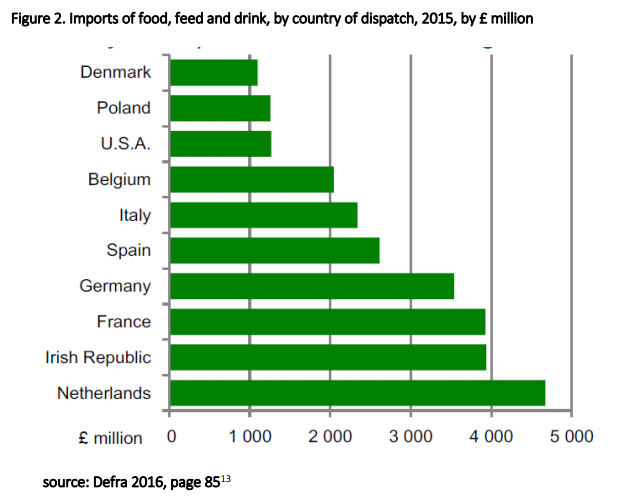 Ensuring Brexit is “as frictionless as possible” and maintaining trade with the EU are key priorities, a spokeswoman for the Department for Environment, Food and Rural Affairs (Defra) said.