Augmented reality (AR) is the most disruptive emerging technology, according to GlobalData’s Emerging Technology Sentiment Analysis Q2 2021. AR replaced artificial intelligence (AI) at the top of the list, based on hundreds of responses to an online survey.

In our latest poll, 70% of respondents stated that AR would deliver either slight or significant disruption to their industry. This was a sharp increase from the previous quarter when 51% said AR would disrupt their industry. In addition, 58% said they had become more positive towards the technology over the last 12 months. Of the seven emerging technologies that GlobalData includes in its quarterly surveys, only cybersecurity did better on this metric in Q2.

This change in perceptions of AR could be long-term and not just a temporary blip. Several factors have contributed to raising AR’s profile in the last year. From a technology mainly used in casual mobile gaming, AR has graduated into a business tool. Covid-19 accelerated adoption during 2020 in sectors such as healthcare, logistics, and ecommerce.

This trend has continued in 2021. In April, Delta Air Lines announced that it would equip all flight attendants with AR technology delivered via 5G to enhance training and help staff with in-flight catering. AR holds great promise for travel and tourism. It can be added to travel apps to help consumers make travel decisions or used on city tours, in museums, and at other attractions to provide additional information to tourists.

Despite the increased interest in AR and the growing perception that AR will disrupt industries, GlobalData’s Sentiment Analysis also sounds a note of caution. When asked when AR will disrupt their industries, respondents were more cautious. Most expect the impact to be felt later in the decade. Whereas more than half of respondents in Q2 said that cybersecurity and cloud computing are already disrupting their industries, only 24% said the same about AR. Moreover, only 10% think that the disruption will come in the next 12 months.

The same pattern was observed when respondents were asked which technologies would live up to all their promises. More than 60% expected cloud computing and cybersecurity to deliver fully, but only 26% expected the same from AR. 50% of respondents said that the technology was hyped, but they could see a use for it. 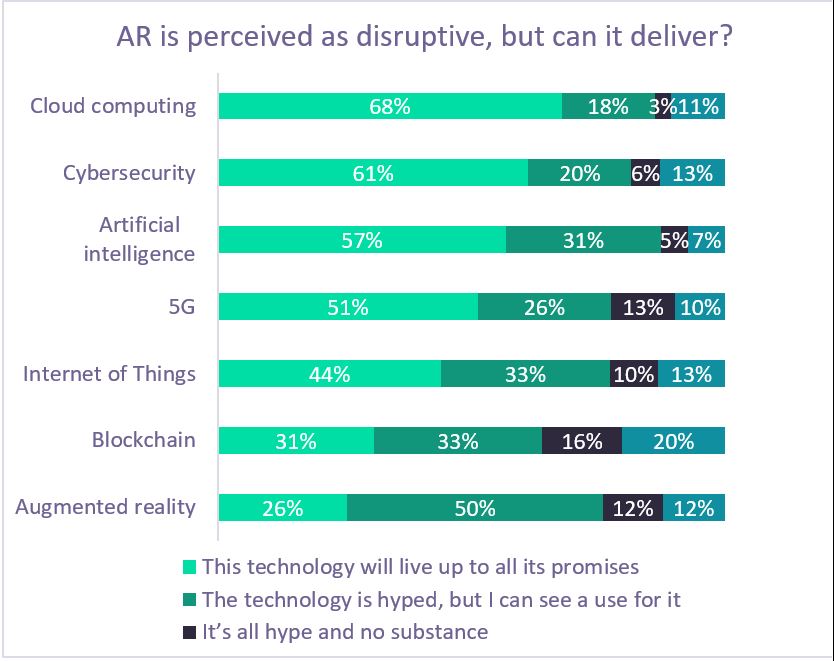 The contrast between the large share of respondents that said that augmented realityis disruptive and the low share that said that the technology was already disrupting their industry suggests that there is some way to go before AR becomes ubiquitous in business. However, several conditions are aligned to make the promotion of augmented reality as a business tool easier. There is a growing perception that AR is a disruptive technology, positive sentiment towards it has also increased, and new enterprise use cases continue to emerge.

GlobalData’s quarterly Emerging Technology: Sentiment Analysis Q2 2021 report is based on six polls that received 2,341 responses from  participants that work in more than 30 business sectors. The polls were conducted online between April and June 2021 and were designed to help us understand the current sentiment of the business community towards emerging technologies and evaluate how sentiment is likely to evolve over the near future.