People in the US state of California are lining up to purchase recreational marijuana legally for the first time after the law changed yesterday.

California is the sixth state to allow sales of recreational marijuana, and as the nation’s most populous state, it’s widely seen as a tremendous boost to mainstreaming marijuana.

California’s Bureau of Cannabis Control said around 100 dispensaries in the state were licensed to sell recreational cannabis from yesterday. Shops will be able to sell marijuana harvested without full regulatory controls for six months but will eventually only be able to sell pot tested for potency, pesticides and other contaminants, and products that have been tracked from seed to sale.

There are still around 1,400 pending license applications for retail sales, distribution and testing facilities.

The California industry is forecast to reach $7bn in a few years, more than the $6.6bn of the entire legal cannabis market in the US in 2016, according to New Frontier Data.

Berkeley Patients Group, a medical pot dispensary which bills itself as the country’s longest-running, said it expected the number of daily customers to double from yesterday from 600 to more than 1,000, NBC reported.

California legalised pot for medicinal purposes in 1996, ushering in a web of dispensaries, spin-off businesses and creeping mainstream acceptance. Though California was not the first — Colorado grabbed that mantle in January 2014 when it became the first jurisdiction in the world – beating Washington state and Uruguay by months – to legalise recreational cannabis sales.

Recreational marijuana is now legal in the US states of Colorado, Washington, Oregon, Alaska, California, Massachusetts, Maine, Nevada, and Washington.

Over half of US states have now taken steps towards legalising marijuana, although many states have only legalised CBD oil for children with epilepsy.

This map from pro-legalisation website kushtourism.com shows states that have legalised recreational use in dark green, medical use in light green and criminalised in red. 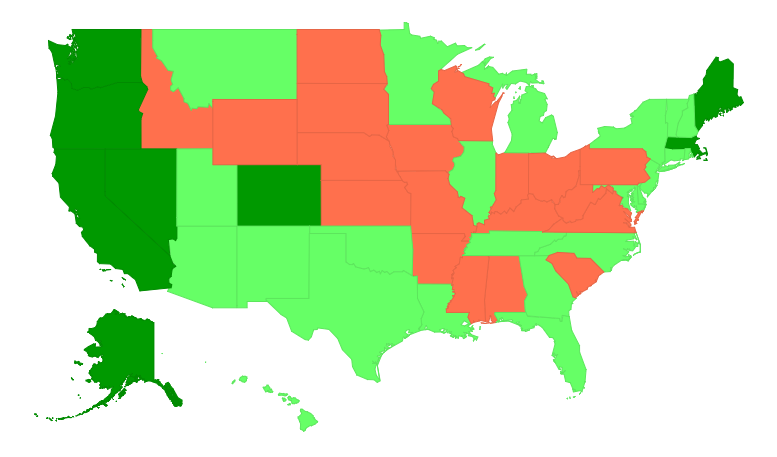 Support for the legalisation of the drug reached new highs in 2017 with a Gallup poll showed that 64 percent of people in the US favour legalisation, while a majority of Republicans now support it.

However US president Donald Trump’s administration has casts a shadow over the emerging industry.

Pot remains illegal under federal law and the attorney general, Jeff Sessions, has compared it to heroin and threatened a crackdown.

Fearful of federal prosecution, banks are shunning marijuana businesses, leaving the industry stuck with mounds of cash which must be transported under armed guard.