But despite Trump’s Twitter-based attacks on the company, Amazon is still likely to beat its tech rivals in the race to achieve a trillion dollar market cap thanks to its aggressive cross-sector and international expansion. 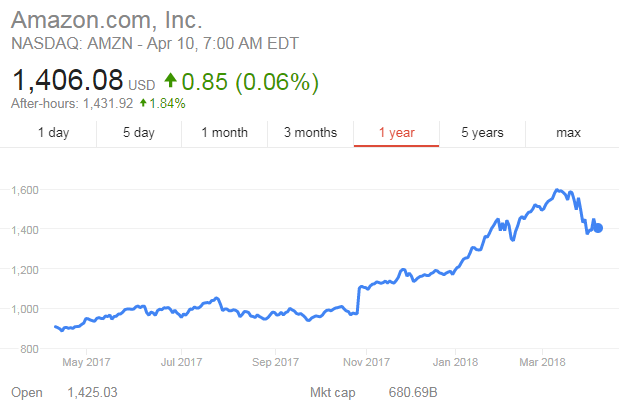 Of the top companies in market cap terms, Amazon’s aggressive expansion plans means it usually emerges victorious when competing against other tech giants. Even if isn’t as big as Apple yet.

Provided Amazon can avoid regulators attempting to break it up, it will be the first of the four tech giants to get to a trillion and stay there.

In many areas where Amazon is directly competing with tech rivals, it is already winning.

In the devices market, Amazon’s Kindle and Alexa products have become market leaders, while Apple was late to the smart speaker market.

While Amazon is diversified, Apple also relies too heavily on devices for sales with the iPhone making up 70% of its revenue. With Amazon, future growth could come from any one of its plethora of ventures.

In the search engine space, Amazon has already beaten Google for product discovery and product searching and currently controls 55% of that market to search engines’ 28%, according to 2016 research by personalisation platform BloomReach.

Amazon is now such an ascendant  force that it only needs to mention a new business venture in a press release to completely wipe out years of gains of an entire business sector.

Amazon is aggressive, diverse, vertically integrated and not far off a monopoly business in a number of segments. Amazon has a business model that is low margin but focused on rapid expansion to create shareholder value.

This means that despite companies like Walmart having much higher annual revenue than Amazon, Amazon has much higher market cap allowing it to financially compete with bigger companies.

Why Apple, Facebook, and Alphabet are less likely to reach $1 trillion

Apple has shown itself to be something of a cyclical business that depends on the quality of its last iPhone launch.

This means with any one launch that doesn’t go well, Apple’s share price is vulnerable and despite Apple’s great track record it is likely some product launches will be troublesome, as happened with the iPhone X.

As it stands, despite Apple being a consistently popular company with the markets it seems there are better placed companies that might reach the trillion-dollar market cap level sooner.

Facebook in early 2018 has to deal with the Cambridge Analytica scandal and the ongoing public backlash. For Facebook, its 2018 financial year could quite easily be damaged by this scandal and so it is unlikely that Facebook will reach the trillion-dollar mark any time soon, considering advertising through Facebook to its users represented 98.3% of its revenue in 2016.

Google has been acquiring numerous companies looking to develop new revenue streams and diversify, to help support its advertising business which makes up 88% of its annual revenue.

However, these enterprises have ended up supporting the main channel of the business or fallen short of expectations and sold off, making it difficult to achieve substantial new growth.